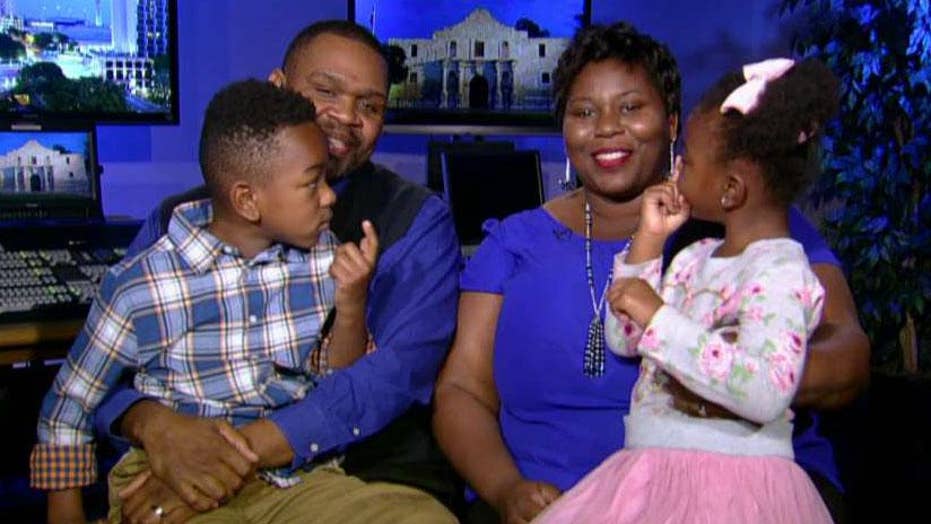 LaKenya and Allen Shaw were able to adopt and give a home to previously abused children after suffering a miscarriage earlier in the year.

A San Antonio couple said it was divine intervention that brought three children into their lives.

The two had recently suffered a miscarriage and wanted children of their own. Their life changed suddenly when they got a call from Theresa Nealy two years ago.

Nealy, a foster parent of 20-plus years, knew the instant she saw LaKenya and Allen Shaw at church that they were the right parents for the kids she was fostering. The kids, then 3 and 4, had been found bound and chained in what turned out to be one of Bexar County’s most horrific child abuse cases.

"In my mind I heard God say, 'Those are the parents I have chosen for those children,'" Nealy told the San Antonio Express-News.

Nealy ended up reaching out to the Shaws. LaKenya said the call was like a miracle.

“I was at a retreat when God told me to stand up and tell all these ladies that next year I would have a baby on my hip,” she told Fox News. “And that night, Theresa Nealy called me.”

She ended up meeting the kids shortly afterward in Sunday school.

“All I could hear from God was ‘these are your babies,’” LaKenya said. “When we met those children, they knew us and we them, it was an instant connection and so evident God had purposefully connected us.”

The adoption became official last May. Today, the siblings, Josiah, 7, and Naomi, 5, are flourishing in their new home. They have new last names and are making new memories, far from the cold, rainy day when they were rescued from heinous conditions. The children were found in a backyard chained and leashed and surrounded by feces.

“All I could think is ‘Why would anyone do that to a child?’ All we wanted to do was love them and give them a safe place, and dealing with their trauma – God just gave us the grace to deal with them and be patient with them. We could tell they were sweet and precious kids, but they’ve been through a lot,” LaKenya said. “All God gave us was love for them.”

The Shaw family in their car. (LaKenya Shaw)

But getting the siblings into the Shaw’s loving arms was challenging. According to court testimony, the children’s mother left the kids in the care of friends, who ended up physically abusing them.

The mother, Cheryl Reed, and her two friends, Deandre Dorch and Porucha Phillips, ended up getting convicted and sentenced. The Shaws also adopted a child Reed had while she was in jail.

Shaw said she put her faith in God to help her and the children through the turmoil.

Naomi and Josiah Shaw were rescued from a horrific abusive situation in 2016. Today they are happy and healthy with a "forever family." (LaKenya Shaw)

“God is faithful,” LaKenya added. “No matter what the hardships are – God can do it. Just trust God, and He brings it all together. Romans 8:28. We live by that.”

Nealy, who is the godmother of the children, set up a GoFundMe with the goal of $150,000 to help the Shaws get a larger home.

“We’re honored that God would just choose us and trust us with these kids,” LaKenya Shaw said. “These kids are living their best life right now…because they’re loved and they know it and they’re safe. They have a family. They’re not missing anything. Aunts, uncles, cousins, they have all that. It’s a beautiful thing that they’re thriving – to see these three kids laughing and just being kids, at the end of this day, it’s just beautiful.”