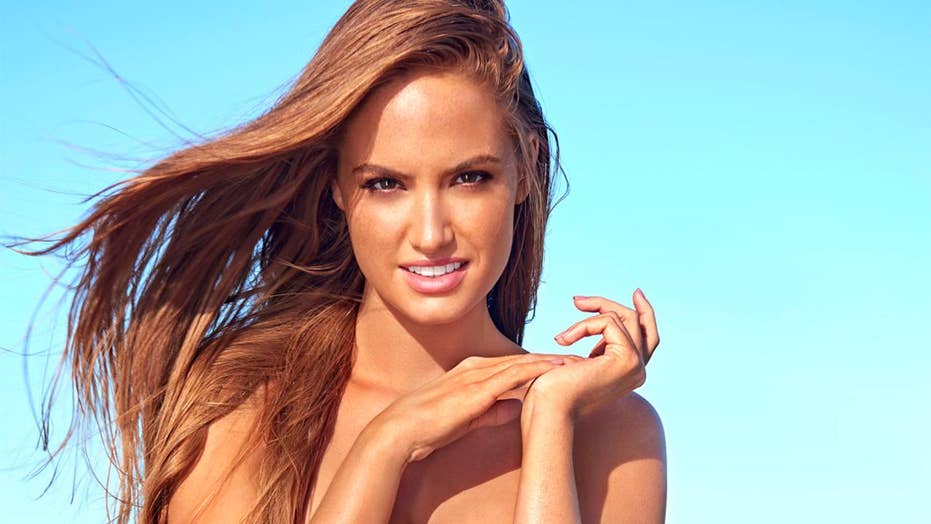 The 26-year-old model made a major splash in 2018 when the magazine announced that she, along with former Patriots cheerleader Camille Kostek, were the winners of the first-ever #SISwimSearch and officially rookies for SI Swimsuit 2019.

The former Miss Minnesota 2014 originally frolicked on the beaches of Belize for Sports Illustrated Swimsuit where she rocked a barely-there bikini that perfectly flaunted her famous features. Her spouse, Houston Texans football player Matt Kalil, was all too eager to show off his wife.

“… He was going to put up his favorite photo of me in his office, and he was going to have this big blown-up photo of me,” Kalil told Fox News. “And after last year’s shoot [editor] MJ [Day] and I were like, ‘I wonder which outfit it’s gonna be?’ He picked the tiniest bikini I was in! I was like, ‘Baby, if people walk into the house, like my grandma’s in the house, and here I am blown up in your office.’ So, now he’s actually getting the photo blown up. It’s happening. The dream came to life.”

Kalil shared that her husband is her biggest cheerleader who happily encouraged her to pursue what would become the opportunity of a lifetime and her first modeling gig ever.

SI MODEL: 'I SCREAMED AND I CRIED'

“My husband is an incredible human being because when he married me, I was working in an immunology lab,” she explained. “So, my life has completely shifted from being this little nerd that would go into the lab every day… hair and makeup was a thing that I never did. I never had fancy clothes. I just wore the same thing every day with my lab coat. … That man has been by me through all of it… He’s the greatest, and I don’t think I could have done any of this without him.”

Kalil said when she first saw the magazine’s announcement on social media about an open casting call were anyone can participate in hopes of becoming the publication’s newest pinup, the decision was a no-brainer.

“When I saw it, I thought, ‘This is my chance,’” Kalil recalled. “It’s always something that I wanted to do, [but] never knew how to get into it. And I submitted a video via Instagram and here I am.”

CAMILLE KOSTEK IS THE NEW ROOKIE FOR 2019

While Kalil was already well-versed with the pageant world, she prepared in the best way she knew how to strip down in front of cameras.

“I am a huge nerd, so before I shot for Sports Illustrated, I studied,” Kalil explained. “I watched all of the best models. I watched Kate [Upton], I watch Chrissy [Teigen], I watched Heidi [Klum]. I watched all of these old videos to see how they moved their bodies and how they posed. That was my way of getting ready for the shoot because before you take a big test, you gotta study. So, I studied right before I shot my spread for Sports Illustrated Swimsuit.

But it wasn’t just the chance to soak up the sun that Kalil was grateful for. The sultry redhead is also thankful to have blonde bombshell Kostek for a pal.

SI MODEL: 'THIS IS MY GOD-GIVEN BODY'

Kalil also noted that it’s been an empowering experience to pose for a magazine where the team is primarily women.

“When you go on set, it’s an entire group of women,” she shared. “They’re making sure that you feel good, you feel comfortable. They won’t put you in anything you don’t want to be put into. They don’t let you pose in a way that you don’t want to pose in. You really have the creative rights to whatever you’re making for Sports Illustrated, which in this industry is very rare.”

“Usually a model doesn’t get to decide what they want, but for Sports Illustrated, it’s all about what you want, so that kind of helps your confidence because you’re in the driver’s seat,” Kalil continued. “You’re the only making the decisions. So it’s easy to be confident when you have these cheerleaders in front of you… And you get to decide what to do. It’s an amazing, empowering environment to be in.”

Kalil insisted she “had no clue” what she was doing when it came to her first photo shoot. However, she said the newest issue, which is expected to hit newsstands in May, will immediately captivate readers. For this year, Kalil headed to the beaches of Kenya while several other models all jetted off to other tropical locations. And Kalil noted that this year’s issue will continue to celebrate body diversity.

SI MODEL: I WAS REALLY NERVOUS

“Sports Illustrated was one of the first to put what is considered to be a curvy model on the cover,” said Kalil. “First, it was Kate Upton, then it was Ashley Graham. They’re changing the game with what people see as beautiful because they like to celebrate every type of beauty. And in this year’s issue, you’re going to see every single type of beauty represented.”

“I mean, we have Paulina Porizkova… and she’s over the age of 50,” continued Kalil. “My God, I wanna look that good at her age. She’s incredible. You have some wonderful people coming in that’ll change the game, so I cannot wait for people to see the launch. You really have every type of beauty represented in this year’s issue.”