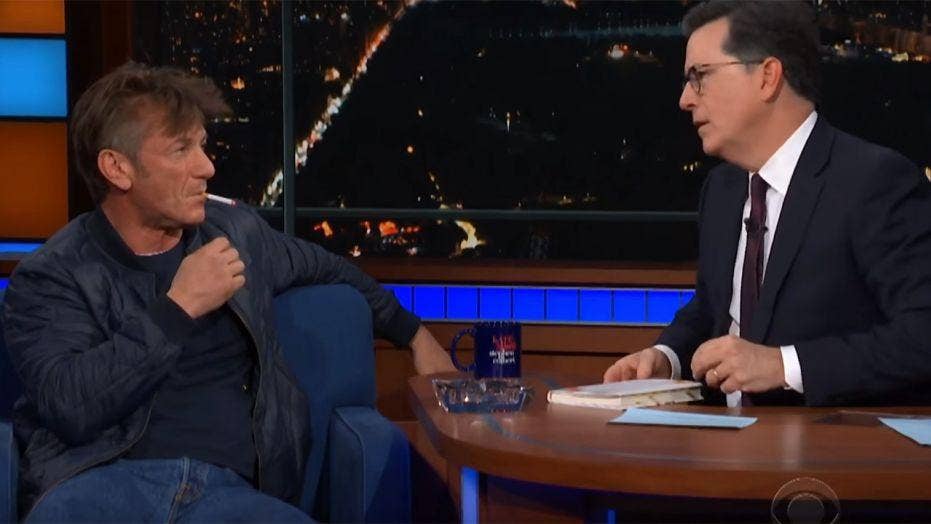 Actor Sean Penn had a bizarre interview with “Late Show’s” Stephen Colbert. Penn lights up multiple cigarettes and admits to still being on Ambien.

Sean Penn's bizarre late-night appearance caused a Twitter frenzy after the actor admitted to taking Ambien before the show and smoked while on air.

On Monday night, Penn appeared on the "Late Show with Stephen Colbert," and while on camera with the talk show host, the Oscar-winning actor smoked two cigarettes and admitted that he had taken Ambien prior to arriving at the show.

“I’m doing well," Penn started. "You’ve inherited a little of the Ambien I had to take to get to sleep after a red-eye last night."

Colbert then asked the actor if he was still on the drug during the interview, to which Penn replied,  “A little bit."

Later on, Colbert suggested that Penn stop smoking cigarettes and said to the actor: “Please don’t smoke anymore. I don’t mind. My parents smoked when I was a child so it gives me happy memories to smell cigarette smoke, but you know we want you to be around for a long time and those things are bad for you."

After Penn lit up on stage, it didn't take long for Twitter users to chime in about the actor's unusual late night behavior.

One Twitter user wrote, "Looking at #Seanpenn on #StephenColbert got me thinking I will never take Ambien."

Another said, "Weird. Sean Penn is smoking a cigarette on Colbert tonight. It's been many a year since I've seen that on live tv."

Others remarked on Penn's "disheveled" appearance.

Following the "Milk" star's interview, "Roseanne" co-star Sara Gilbert joined Colbert on stage, where she also had some words about Penn's interview.

But cigarettes and Ambien aside, Penn got serious and took a moment to praise the Marjory Stoneman Douglas High student survivors and the organizers of Saturday's March for Our Lives rallies for gun control, which were sparked by the mass school shooting at the Florida school on Feb. 14.

“Within days of that, not only are they stating their case with incredible sobriety and articulate words, but in such an inclusionary way," Penn said. "You feel like there are reasonable people who have been on the other side of this conversation who will listen to these kids."