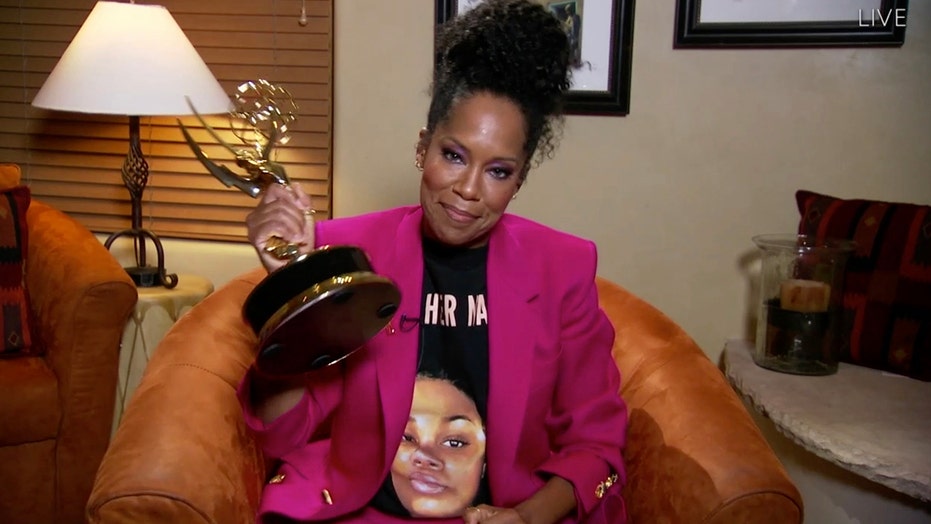 Regina King made a statement on Sunday when she took home an Emmy Award for “Watchmen,” her fourth win in the past six years, and wore a shirt donning Breonna Taylor’s face while giving her acceptance speech.

“The cops still haven't been held accountable,” King, 49, said about her decision to wear the black shirt that reads “Arrest the cops who killed Breonna Taylor” on the rear.

“She represents just decades, hundreds of years of just violence against Black bodies, Breonna Taylor does,” King told reporters in the virtual press room after her win for outstanding lead actress in a limited series or movie.

She continued: “And the show, I feel like if this was a perfect... wearing Breonna's likeness, representing her and her family in the things that the stories that we were exploring, that we were presenting, that we were holding a mirror up to in 'Watchmen' – it felt appropriate to represent with Breonna Taylor.”

Regina King poses with the award for best performance by an actress in a supporting role for 'If Beale Street Could Talk' in the press room at the Oscars on Sunday, Feb. 24, 2019, at the Dolby Theatre in Los Angeles. (Photo by Jordan Strauss/Invision/AP, FILE)

All of the profits of the Phenomenal brand shirt will benefit the Breonna Taylor Foundation and King said she was inspired to wear it by “Orange Is the New Black” star Uzo Aduba, who also wore a shirt donning Taylor’s name while winning an Emmy for outstanding supporting actress in a limited series or movie for her role in "Mrs. America."

“Whether you like it or not, when you've decided to take on this career choice to be a part of the thespian community – if you have some success in it, you do have a platform,” King said. “And I love being a Black woman. I loved being a Black girl. I love being American and it's important that people see all of those things together.”

King told reporters that accepting her Emmy win from the confines of her home gave her more “jitters” than she would have on stage and lamented the fact that she couldn’t share the honor with her cast and crew.

“I think my nerves are more jittery here at home," said King. “I feel like when I've won an Emmy, I mean, what a blessing to win four times – but something about being in the room and being able to share that moment with your peers and your family and be able to look in everyone's faces and get hugs and know that you're going to get a hug, I'm missing that.”

King maintained that she felt uneasy while giving her virtual acceptance speech.

‘GOLDEN GIRLS’ TO BE REENACTED BY TRACEE ELLIS ROSS, REGINA KING, OTHERS IN VIRTUAL WATCH PARTY

“My brain kind of went blank, you know, didn't get a chance to say, 'I love you, Mom' because it's kind of just such a weird moment,” she pressed. “Didn't get to recognize my cast, which I know I would have done for sure looking at them out there. So yeah, I like the real awards better – not that these are fake. I don't know what to call it, man.”

The “Boondocks” alum said she still has to be on set the following morning at 4:00 a.m., but said given all of the maneuverings around the ongoing coronavirus pandemic and societal conversation, she’s simply “taking it all moment by moment.”

“I just wish I was there with my comrades. I wish we were together to just lock arms and celebrate this moment together,” said King. “Winning best series is truly – it's just fantastic and a big reason is because of all of the fans, the critics. People were really moved as much as we were as artists telling this story. And it's a lot. So I'm still taking it in.”

“I'm sure the family that I'm with tomorrow on this new journey ... will hold me up and help remind me to enjoy and to celebrate with grace,” added King.