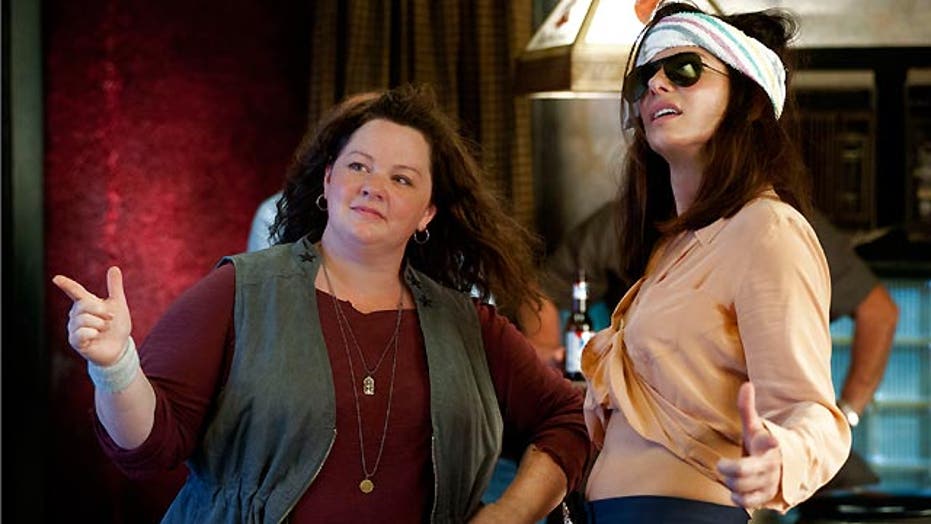 Actresses share what they love most about each other

NEW YORK – Meet the new "Cagney and Lacey," the new "Starsky and Hutch," the new ... you get the picture. Sandra Bullock and Melissa McCarthy combine their comedic skills for the R-rated buddy cop comedy "The Heat." Directed by Paul Feig, who brought audiences the female-led blockbuster hit "Bridesmaids," "The Heat" stars Bullock as a straight-laced FBI agent teamed up with McCarthy’s tough-talking cop.Together they need to solve the case of their careers, learn how to work as partners, and dance.

Bullock and McCarthy told FOX411 about their big dance number, how they enjoy not having to be so “charming” on screen, and what makes them laugh.

FOX411: So can girls be just as raunchy, R-rated-comedy-wise, as the guys?

Sandra: Well it's not just the raunchiness, it's the physicality.

Melissa: Yeah I don't think it's raunchy as much as it's not cleaned up perfect. Everyone always owns an artisanal shop in every movie. There’s always like the girl that's perfect, she always owns like a cheese shop, or something charming.

Sandra: There's nothing charming [in 'The Heat']. We don't have to pretend to be something that we're not.

Melissa: They're interesting people as opposed to just being charming. Because charming is not funny, [and] not even that interesting. It's all your oddities and it’s people's little peccadilloes that really makes them. That's right, peccadilloes!

FOX411: What’s something that you got to in this movie you’ve never done before.

Sandra: Shove a peanut up my nose and have Melissa extract it with a drink straw.

FOX411: And you also got to show off some ‘moves like Jagger.’

Sandra: If Jagger moved like that he wouldn't be Jagger. I had the un-moves. She had the moves. This one's got some great rhythm and she got to actually display it. I showed no rhythm whatsoever.

FOX411: Were those  your signature, go-to dance moves?

Sandra: There's nothing about those dance moves that I would ever have coming out my body again. But it was right for the character because I was "in character" the whole time.

Melissa: I love that show

Sandra: I love that show so much, I cry all the time…

Melissa: I was just going to say that, I cry every time I watch the show.

Sandra: I've never had good fortune with sequels. Everyone says this time is going to be better. And then I’ve done them and they’ve just been not – they weren’t better.

Melissa: What if it's called "The Heats."?

Sandra: Oh, heats between the sheets. It could be a whole different kind of sequel.