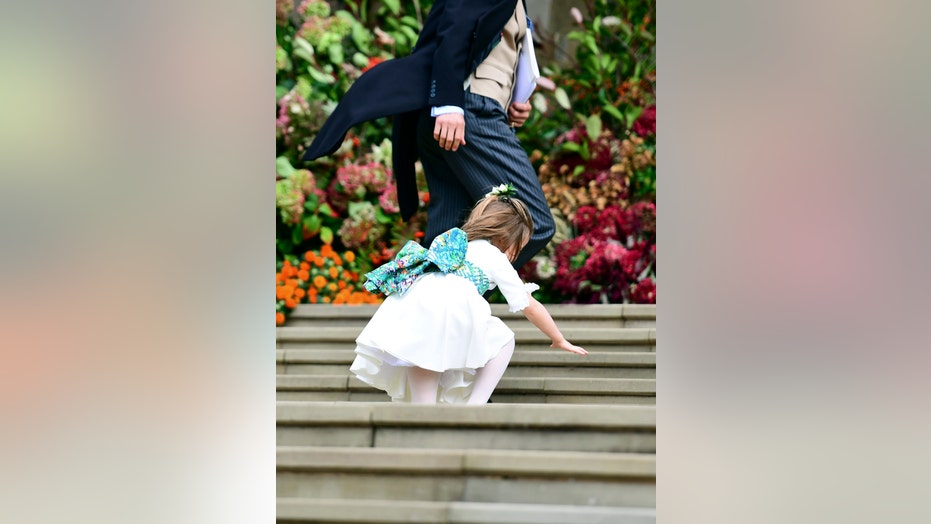 A gorgeous, giggling group of royal youngsters stole the show when they arrived to play their part in the bridal party.

Battling the wind, the mini royals walked excitedly up the front steps of St George’s Chapel where six-year-old Louis de Givenchy fell over due to the strong gusts — and Princess Charlotte, 3, also had a little stumble.

They each had white flowers in their hair and white stockings and shoes.

The page boys donned white shirts with navy, velvet pants and the same green fabric as a sash.

All the children’s outfits were by Amaia Arrieta of Amaia Kids with the bow and sash designs incorporating the Mark Bradford artwork included in the Order of Service.

They included posies of Lily of the Valley and spray roses.

The children held hands as they walked slowly up the aisle behind Princess Eugenie and her father Prince Andrew.

Prince George and Princess Charlotte arrive for the wedding of Princess Eugenie of York and Jack Brooksbank.

Siblings Princess Charlotte, 3, and Prince George, 5 — who are Prince William and Catherine’s children — reprised their roles as bridesmaid and page boy and were on their best behavior.

Charlotte, who’s the youngest of the bunch, was seen waving to crowds from the wedding car while George was later seen looking inquisitively around the church.

The adorable pair are old hands at weddings, having been a bridesmaid and page boy at the wedding of Prince Harry and Meghan’s nuptials earlier this year where they also stole the show.

The siblings walked down the aisle at their aunt Pippa’s wedding to James Matthews last year as well.

However, their six-month-old brother Prince Louis was not in attendance.

Savannah Phillips, 7, and Isla Phillips, 6, who are daughters of Peter and Autumn Phillips were also bridesmaids.

Bridesmaids and page boys, including Prince George, center, and Princess Charlotte, left, wave as they leave after the wedding ceremony of Princess Eugenie of York and Jack Brooksbank. (AP)

Adorable photos of Savannah were captured at Trooping the Colour this year, where she was spotted playfully holding her hand across Prince George’s mouth and telling him to stop singing during the national anthem.

Mia, 4, who is the daughter of Zara and Mike Tindall and Maud Windsor, 5, who is Eugenie’s goddaughter and daughter of Lady Frederick and Lord Frederick Windsor joined the gorgeous bunch as bridesmaids too.

The pair are the children of Prince Edward and his wife Sophie.

Meanwhile, maid of honor and sister Princess Beatrice arrived in a royal blue dress by Ralph and Russo and purple headband by Sarah Cant, which was a modest choice compared to the flamboyant hats she has worn in the past.

Beatrice smiled proudly as she sat next to her mother Sarah Ferguson, Duchess of York in the front row.

Jack’s brother, Thomas Brooksbank, 29, who was the best man stood nervously at the altar in a dark suit, white shirt and deep orange tie, which paired nicely with the autumnal flowers inside the chapel.

He and Jack sported huge smiles as Princess Eugenie arrived at the church.