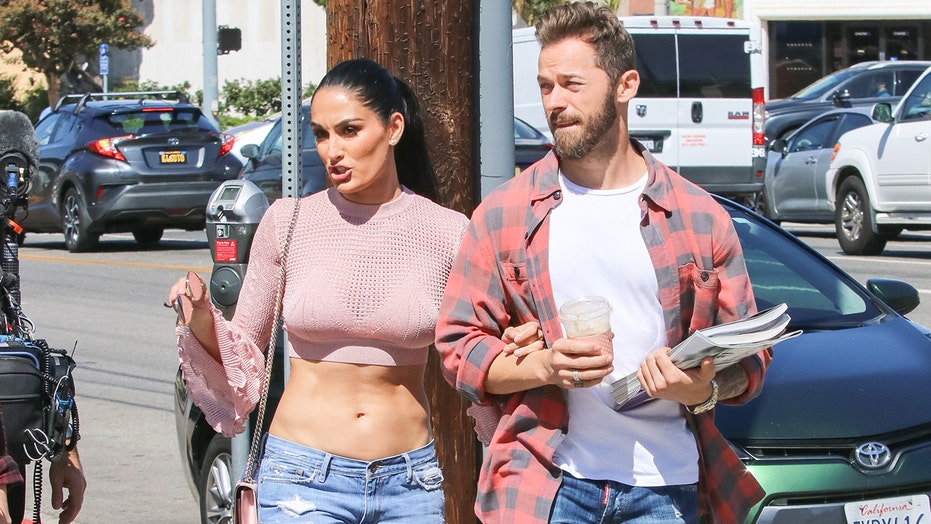 Nikki Bella's abs made an appearance during a stroll with beau Artem Chigvintsev in the Studio City neighborhood of Los Angeles.

The couple, who started dating earlier this year, looked very much in love, packing on PDA for the paparazzi and bystanders to see.

The "Total Bellas" star, 35, paired a long, belle sleeved pink crop top that showed off her rock-solid midriff. She paired the knitted shirt with distressed jeans and carried a pink metal chain Louis Vuitton purse over her shoulder.

Artem, who was formerly on "Dancing With the Stars," also rocked distressed jeans and wore a red and blue plaid shirt over a white -T-shirt.

The Russian-American professional dancer, 37, couldn't keep his hands off his lady as they shopped for magazines at a newsstand.

Bella, who was formerly engaged to John Cena, retired early from her WWE wrestling career due to health issues and a benign cyst found in her brain.

John Cena and Nikki Bella were scheduled to be married on May 5, 2018, but split weeks before their wedding. (Reuters)

The two-time WWE Divas Champion has a podcast with her twin WWE wrestler sister Brie titled "The Bellas Podcast."

Nikki and Brie Bella graced the cover of the October 2016 issue of Muscle &amp; Fitness magazine. The wrestlers showed off their toned bodies in sexy fitness gear.

During an episode of their podcast last month, Bella put Artem in the hot seat and confronted him about his thoughts on having children, saying, "I really need to know this. Me and my vagina and ovaries."

The "DTWS" star went on to say that he's given thought to having kids.

"If I have to throw a number, I would probably say two because that's how I grew up and I had a good relationship with my brother," he responded.

"I want twins," Nikki revealed on the podcast episode, given her strong relationship with her twin sister. "I want a boy and a girl, and I want to knock it out all at once."