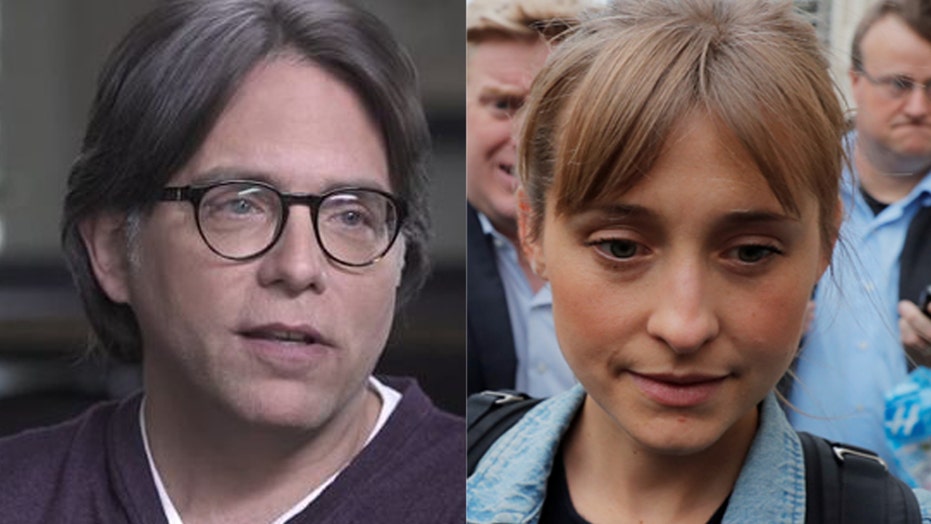 Nicki Clyne, known for her role on "Battlestar Galactica," is speaking out publicly in support of NXIVM cult leader Keith Raniere.

Clyne was a former member of the "self-help group" and is married to "Smallville" actress and high ranking NXIVM member, Allison Mack, who also pleaded guilty to racketeering charges in April 2019.

“It’s very unfortunate the way that the word NXIVM has been applied and is now synonymous with the term sexual cult, which I don’t even know how to define what that is,” Clyne said during an interview with CBS This Morning.

Clyne admitted to being part of "DOS," the corrupt organization's inner sex ring, in which women entered into "master-slave" relationships and were branded with Raniere and Mack's initials.

Witnesses testified to living in a cult-like atmosphere and being forced to have sex with Raniere.

Prosecutors said testimony showed Raniere used women known as "masters" to demand nude photos and other embarrassing secrets from "slaves." The material would be made public if they didn't obey orders to have sex with him to keep them in line, they said.

When Raniere was convicted, Richard P. Donoghue, United States Attorney for the Eastern District of New York, said, "This trial has revealed that Raniere, who portrayed himself as a savant and a genius, was in fact, a master manipulator, a con man and the crime boss of a cult-like organization involved in sex trafficking, child pornography, extortion, compelled abortions, branding, degradation and humiliation."

"His crimes, and the crimes of his co-conspirators, ruined marriages, careers, fortunes and lives. The evidence proved that Raniere was truly a modern-day Svengali," Donoghue added.

Prosecutors also claimed that Clyne and Mack were only married "at the behest" of Raniere.

Clyne revealed to CBS how she hasn't spoken with Mack since she pleaded guilty. “I haven't been able to speak to her for a year and half. Part of the conditions of her bail is that she can't speak to anyone who is affiliated in any way with the case or NXIVM,” she said.

But Clyne admitted that if given a chance to rejoin NXIVM, she would. “Yeah. I wouldn't trade my experiences for anything," she said.

On Friday, various supporters of Raniere delivered a signed petition to the prosecutors in the Eastern District of New York asking them to confirm they "acted ethically" during the trial.

Among those signatures is one from Amanda Knox, the former American college student known for being acquitted of killing her roommate in Italy after spending almost four years in prison there.

"I signed the petition because violation of these practices would constitute prosecutorial misconduct, regardless of Mr. Raniere's guilt or innocence," Knox told CBS.

Neil Glazer, the attorney who represented more than 80 of Raniere's victims, called the petition "bizarre" and a publicity stunt "orchestrated by Raniere to throw up smoke and mirrors and to peddle conspiracy theories to keep his remaining disciples in the fold."

Raniere is scheduled to be sentenced on Oct. 27 and could face up to life in prison. Mack is awaiting sentencing.