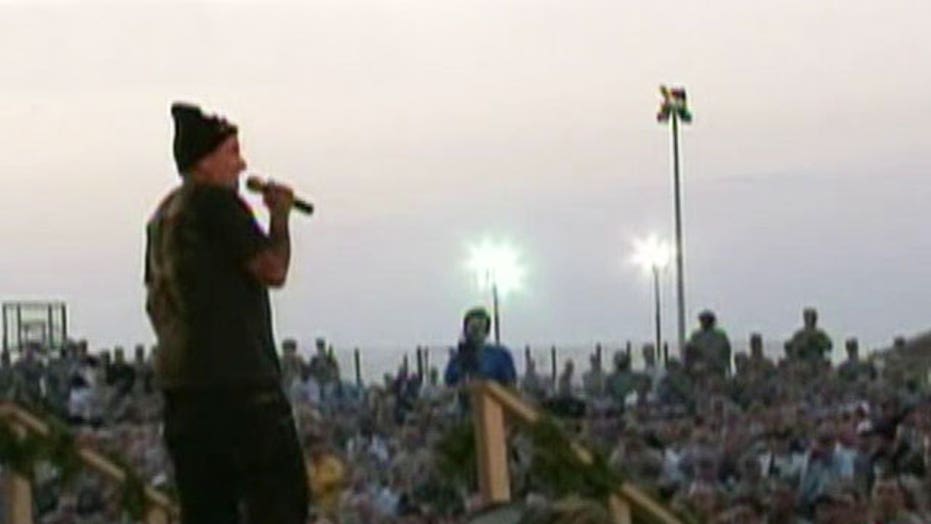 LOS ANGELES – Robin Williams participated in United Service Organization (USO) tours for more than a decade, entertaining troops in war zones from Afghanistan to Iraq to Kuwait. He made many trips to 13 different countries and performing stand-up routines for almost 90,000 troops. So the news of his death -- believed to be a suicide -- sent shock waves through the U.S. armed forces.

Secretary of Defense Chuck Hagel said Monday that the entire Department of Defense community "mourns the loss" of the Hollywood figure.

"Robin was a gifted actor and comedian, but he was also a true friend and supporter of our troops," he said in a statement. "From entertaining thousands of service men and women in war zones, to his philanthropy that helped veterans struggling with hidden wounds of war, he was a loyal and compassionate advocate for all who serve this nation in uniform."

The USO added that "Robin circled the globe entertaining troops and families. He will always be a part of our USO family and will be sorely missed."

Fellow Hollywood actor Gary Sinise, himself a tireless advocate for the troops, took to Twitter to acknowledge Williams's "genius as an artist and comedian," and his love for the armed forces which "no doubt was much appreciated by all who serve."

"In the military in the last 15 years? Then you've probably got a Robin Williams story," one former service member tweeted. Another wrote "thanks for making us laugh when we needed it the most." Another observed that he was a "beloved figure" on base while one veteran tweeted: "Nobody had our back more than the great Robin Williams. A generation of troops will forever be grateful."

Williams, 63, was said to be in a deep depression in the past weeks, something many veterans can relate to.

"Many veterans are expressing their grief, because depression does not discriminate. It effects the best of us as much as it craves attention from the worst in us. Robin put himself out there so much, especially for troops in combat," Lt. Col. Arnold V. Strong, an Army Reserve officer and veteran of Iraq and Afghanistan, told FOX411. "I saw him myself in Kuwait in December 2004. So many of us saw him as a heart of gold, despite his demons."

Strong also noted that many in the military community are hurting to hear of Williams's death because "we too have our own ghosts and inner hurts" and depression powerfully resonates.

"Far too many of us are dealing with these issues through prescription drugs that are but one tool in a much broader tool kit of healing arts," he said. "I fear that the initial sadness that so many of us are expressing may just as easily turn to anger within days because we all know fellow veterans that have taken their own lives."

Military.com posted a tribute to Williams highlighting perhaps on of his most memorable interactions with deployed men and women, a 2007 appearance to Camp Arifjan, Kuwait.

In the video, the actor is left stunned when, suddenly, everyone turns away from him as a "Retreat" ceremony begins during his stand-up routine. Williams was unaware at the time that the American flag on base was being lowered to end the day and by tradition, troops immediately stand at attention.

The humble performer improvised with a humorous response.

"I'm not going to forget that. I've never had an entire audience just go 'forget you!' he lamented, before turning his own back on the large crowd of laughing soldiers.

According to a source closely connected to the late comedian, he was very earnest and deeply engaged with issues involving our military.

"Robin was very sensitive and compassionate person," said the insider. "He cared a lot about the men and women over there fighting."

"He really put his money where his mouth is," one prominent entertainment industry added. "Unlike so many, when he sought to help people, he really went ahead and helped people."