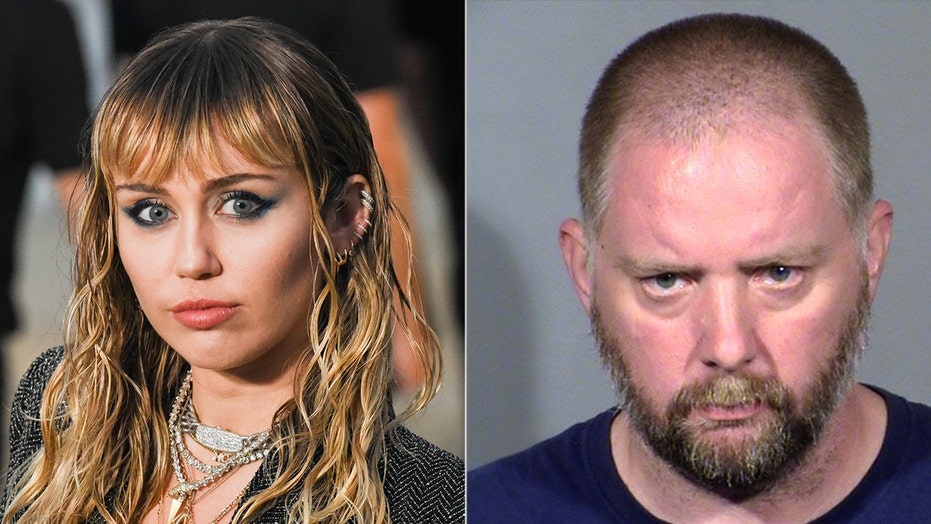 A seemingly deranged Miley Cyrus fan who was arrested at her show Saturday night reportedly told her security team it was his "life's mission to impregnate" the superstar.

David Rumsey, 42, was in the crowd of her iHeartRadio Music Festival set in Las Vegas when Cyrus's security team spotted him, TMZ reported. He was detained and later arrested.

The man was reportedly on the team's "watch list" because he allegedly has made threats against the "Wrecking Ball" singer in the past.

Rumsey also has been active on Twitter in his quest to reach Cyrus. As noted by the tabloid news outlet, Rumsey tweets often about the 26-year-old, most recently before her show last weekend.

On Saturday, when Cyrus tweeted about her iHeartRadio performance, Rumsey wrote: "Can't wait."

"Been here since Thursday hoping to maybe meet up before if you where in town early. Love you and hope you give me time. We have a lot to talk about."

"Just an fyi I would have spent more on concert but didn't want to be sitting next to someone trying to get with me. I myself don't want to be next to anyone but you. I do hope we can meet up like I've been asking before the concert just to talk about your music lyrics," he tweeted.

Rumsey later followed up that he was "hoping not to be back at my room. I don't want you to have to go to motel 6. I wanted to stay in one of the hotels close to stadium and banned from mgm hotels from when you took my soul. I'll go check for messages of where to meet at. I'm in room 208 at Tropicana one."

On Sept. 13, he apologized for "hurting" Cyrus and blamed President Trump. He tweeted he hopes they "can talk about everything in Vegas so I can explain all to you. I am wanting as much 1 on 1 time talking with you as possible. I know soon I will be partying it up with all the famous people but you are the only one I really want to talk to."

"I feel a party will be having everyone try to talk to me and trying to talk to you might be harder. I know after we are together we can party it up with 2pac, biggie, Prince, Michael Jackson and all those we lost," Rumsey said. "So any party you might have planned will be more of a pre-party."

He has repeatedly tweeted that he loves Cyrus, and that he can't wait to see her — and has even tweeted at her famous father, Billy Ray Cyrus.

Sources told TMZ it was his Twitter feed that made Cyrus's security team wary of Rumsey ahead of the show. They handed out photos of him to staff inside the venue and warned to look out for him.

Online Clark County records indicate Rumsey was booked on a felony charge of making threats and was still being held as of Tuesday on $100,000 bail.