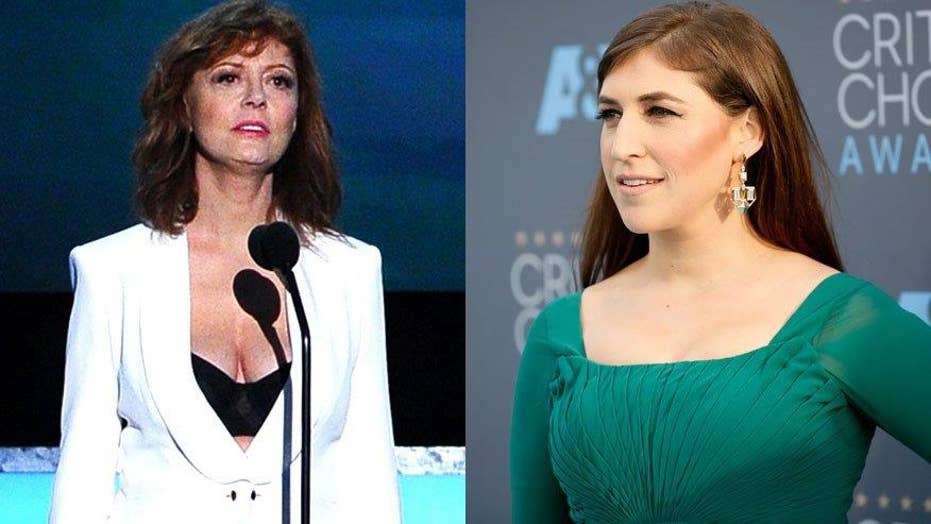 The British TV personality joined "The Big Bang Theory" actress on Monday's "Late Late Show" and got quite the surprise when he started explaining his Twitter feud with Susan Sarandon.

Morgan posted on Twitter after the 2016 SAG Awards that he found it "inappropriate" that the 69-year-old star had her cleavage on display while presenting the In Memoriam segment of the ceremony. "Would Susan Sarandon wear this to a funeral?" he tweeted. "No. It was thus horribly inappropriate for an In Memoriam tribute."

WATCH: Kate Winslet Is Super Impressed With Susan Sarandon's Cleavage, Can't Stop Herself From Touching It!

Sarandon fired back with a flashback photo of herself from "The Rocky Horror Picture Show," where she's posing in a white bra. From there, numerous people identifying as feminists started tweeting Morgan cleavage pics.

In response to Sarandon's #cleavagegate, Morgan did clarify his comments. "Just for the record, @SusanSarandon, I think your cleavage is magnificent," he later tweeted. "I'd just keep it hidden for 'In Memoriam' tributes. Love Piers."

After the 50-year-old told of his Twitter feud on "The Late Late Show," Bialik declared, "I identify as a feminist and I'm going to do it this way."

That's when she stood up and flashed him her cleavage to the shock of both Morgan and host James Corden. "You are blushing!" the 40-year-old actress exclaimed. Morgan responded, "I feel deeply punished."

WATCH: Mayim Bialik Dedicates Critics' Choice Award to Late Father -- 'This Is for You'

"Of all the things I thought would happen on this couch tonight, that was not one of them," he added.

Bialik, who was also at the SAG Awards, joked that she saw Sarandon at the event and "bumped into her cleavage" when she was "behind her."

Piers insisted that his only problem with the outfit was that she wore it while presenting the In Memoriam tribute. "I have no problem with cleavage," he touted. "I love cleavages."