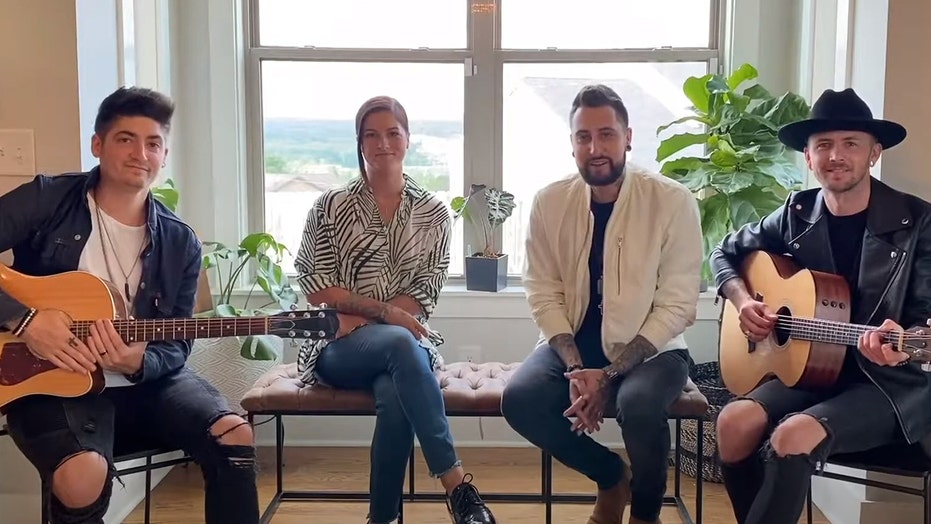 EXCLUSIVE: Country music acts Leaving Austin and Cassadee Pope have been riding a wave of highs since they debuted their collaboration single “American Avenue” this July during the coronavirus pandemic.

Although the song was recorded late last year, the trio of cool California friends Austin Machado, Davis Forney and Michael Stevens who make up Leaving Austin, and their co-writing partner Pope felt like no other time felt more right than to debut the record in the thick of a grave time of uncertainty.

The band tapped Pope, a former champion on “The Voice,” to lend a harmonic tone to the country-pop duet and neither disappointed.

In fact, the cast of crooners said Pope was the only option they had in mind for “American Avenue," and getting her on the track was the easy part. All they needed was a push in the right direction.

“We have played shows together over the years and we didn't really know each other but she remembered us from when we did a Boots in the Park thing did a few shows together,” the band told Fox News. “And we always had her in mind when we had this song we knew was going to be like a duet. You know, we knew we were going to have a woman on it and we were talking about Cassadee for a while. And then we had a BMG [Publishing] Christmas party and I was like, 'I'm just going to ask her today, this works.”

Pope said that as independent artists, the timing and logistics of putting the record together couldn’t have lined up more perfectly for their collaboration.

TYLER RICH REFLECTS ON ‘CONSTANT GRIND’ OF TRAVELING 2,000 MILES ‘BACK-AND-FORTH BETWEEN MY DREAM AND MY WIFE’

“That's what I love about this story, is it is so natural in the way that it all came about,” Pope said during the interview. “The only thing I knew we had in common at the time was BMG Publishing. But a lot of collaborations come about because you're on the same label or you have the same manager or there are just some politics involved. And this was really just them being like, 'Hey, would you be interested in singing a song with us? We think you'd sound great on it.' So they sent it to me and I was like, 'Yes, this sounds like a hit. I love this song. It's so catchy. And then, yeah, I think we recorded it like the end of last year.”

The band said they knew they had the chops to find success in country music while they were laying their first EP, “Southern Gold.”

“Recording the first EP we did, that was a big moment for us where we knew this is the next level of songs for Leaving Austin,” said Stevens. “And we all kind of had a feeling that this was something that might actually take us over the edge a little bit. And we had a good amount of success with that. And that kind of feel led to the whole thing with 'American Avenue' with Cassadee and just kind of rolled over.”

Pope couldn’t contain her excitement when Leaving Austin handpicked her to join them on their single. The band saw Pope for her talent as a singer-songwriter and performer before anything else, which many women in the genre have faced in their uphill battles to be seen equally and taken seriously.

“I mean, it's exciting because I've been in the industry so long, I don't hold my breath,” Pope said about the new era of inclusion the genre appears to be headed toward with regard to equal radio play and placement. “I'm like, 'Wow, that's great.' I love seeing my friends succeed and I love seeing a couple more women on the radio. Not a ton, but I also have yet to push it a single to country radio since my last record.”

The "Stages" songstress continued: “So it's also like we'll wait and see when it's my turn to deliver a song that I really believe in and that I think deserves to be played – we'll see if they come through for me. Because I know as many women as they're embracing and that are getting the opportunities, there's also a lot of women that aren't that I know of, that I love, that I'm a fan of."

"I think as women, we've been accustomed to proceeding with caution and being like, 'Well, I'm really happy to see the changes, but I'm also not going to become complacent and say, 'Oh, great, it's done, it's changed,’" added Pope. "So I think there's still a lot of work to be done. And so that's a very complicated answer but it's a complicated subject, you know?”