Two men who hurled racial taunts at Fox News contributor Lawrence Jones reveal the true sentiments of some on the left, he said.

Jones told Sean Hannity on "Hannity" that many conservatives are wrongfully construed as hateful and discriminatory, and the media will likely ignore the New York City incident.

"This is who they are, Sean," the Campus Reform editor-in-chief claimed. "So often those of us on the right are painted as the racist people, the hateful people," he said.

"I was just asking these people a simple question about if they felt like the president should be impeached or not."

Jones interviewed demonstrators at a Saturday rally at Foley Square, near City Hall, and received a wide range of answers.

One demonstrator claimed President Trump was, "an illegal president... in cahoots with the Russians," while another praised the president.

However, according to a Fox News producer at the scene, two men walked up to Jones near the end of the rally and told him to go back to Fox News, "where there's more cotton for you to pick." 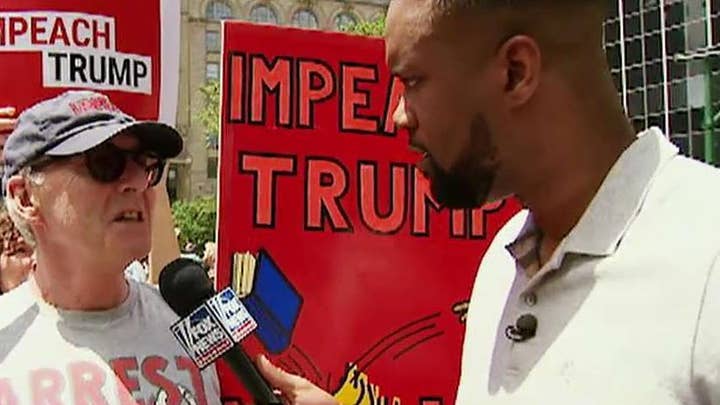 With Jones' camera rolling, the man confronted by the producer, wearing a gray shirt, turned his back to the camera and made an obscene gesture. The second man, wearing a red shirt, told Jones: "He'll tell you to go back to Kenya next."

Jones reiterated he was not fazed by the taunts.

"This is who these people are, but I doubt many people in the media are going to condemn these people," he said.

"I'm going to expose it every single day. If they think I'll stand down because they yelled obscene things, to me they have another thing coming."