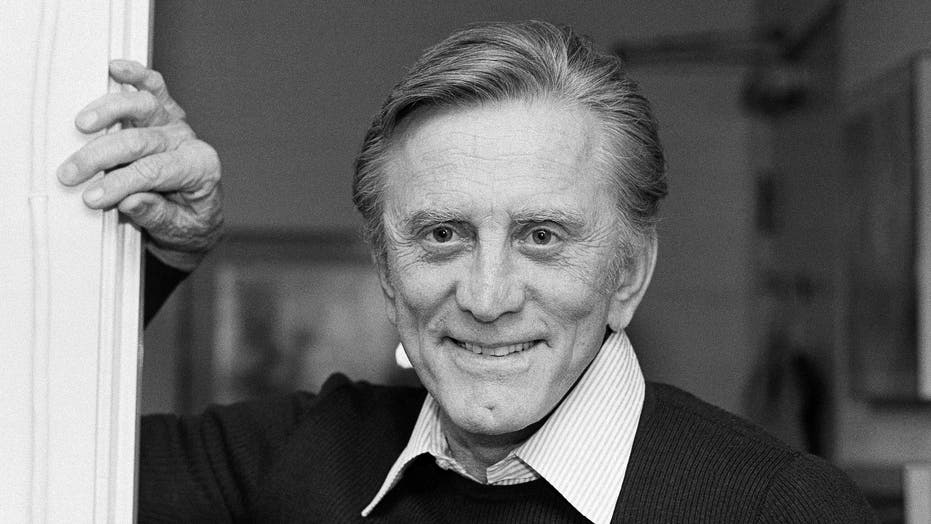 Kirk Douglas, the legendary actor and film pioneer, has died at the age of 103.

Douglas’ son, fellow actor Michael Douglas, shared a tribute to his father on Instagram on Wednesday. In it, he noted that Kirk "was a legend" and he's leaving "a legacy in film that will endure for generations to come."

Douglas garnered his first Oscar nomination in 1949 for his role in Mark Robson’s boxing drama “Champion” and followed that up with two more Oscar bids for his part in “The Bad and the Beautiful” in 1952. His performance in the flick also earned Douglas a Golden Globe award.

Though Douglas never won an Academy Award in his career, he was presented with an Honorary Oscar in 1996. Douglas was also awarded the AFI Lifetime Achievement prize in 1991, the Kennedy Center Honors in 1994 and the SAG lifetime achievement award in 1999.

Here’s a look at Douglas’ most famous roles.

Based on the novel by Humphrey Cobb and directed by Stanley Kubrick, “Paths of Glory” saw Douglas as a heroic Colonel in the French Army in WWI who put his foot down in refusing to follow through with a suicide mission much to the chagrin of his generals. Filmed in Germany, the antiwar flick tackled the psychological struggle and brutality of war.

While “Paths of Glory” marked Douglas’ first-ever foray into working with Kubrick, “Spartacus,” also based on a novel by Howard Fast, features Douglas in his most recognized role as a rebellious slave who leads an uprising against the Roman Republic. Though Douglas starred in and co-produced the film, he made sure to credit blacklisted screenwriter Dalton Trumbo. Peter Ustinov would win the Oscar for best supporting actor for his role in the film.

Mark Robson’s “Champion” was the film that landed Douglas his first-ever Oscar nomination. The intense boxing drama sees Douglas as Midge Kelly – a poverty-stricken kid with a penchant for punching who fights and claws his way to the top. Fans can credit “Champion” for ushering in a completely unique and refreshing style of filmmaking that helped in steering films such as “Rocky” and “Raging Bull.”

Helmed by John Frankenheimer and shaped by Douglas’ own production arm, Joel Productions, “Seven Days in May” is a stout political thriller. Acting opposite Burt Lancaster, Douglas’ character, Colonel “Jiggs” Casey is tasked with stymying a coup by Lancaster’s character, General James Scott, to overthrow the President of the United States.

Kirk Douglas and Anthony Quinn in 'Lust for Life' (1956). (Metro-Goldwyn-Mayer)

Channeling his inner Vincent Van Gogh for the part, Douglas proved himself to be more than a well-rounded performer in the film based on the biography from Irving Stone about the tragic life of the talented artist. Douglas worked with a familiar collaborator in Vincente Minnelli, who also directed “The Bold and the Beautiful” some four years prior, and brilliantly showcased his ability to encompass the troubled painter. For his role, Douglas would take home a coveted Golden Globe, however, he would lose out on the Oscar to Yul Brynner for “The King and I.”

The Disney-backed live-action adaptation of Jules Verne’s science-fiction novel served as an opportunity for Douglas to experiment with a different type of role and step away from his comfort zone as a hardened performer and introduces a cheekier Douglas. The morality-laden film sees the legend as Ned Land, a sailor thrust into service aboard a vessel searching for an elusive sea creature. When the “monster” makes a surprise appearance, the crew are thrown overboard and said monster is discovered to be a revolutionary and ultramodern submarine helmed by the mysterious Captain Nemo, played by James Mason.

Kirk Douglas and Lana Turner in 'The Bad and The Beautiful' (1952).  (Metro-Goldwyn-Mayer)

Famous for stirring up controversy at the time for its portrayal of a merciless Hollywood movie producer, the Vincente Minnelli-directed melodrama is revered as one of the best films ever made. Lana Turner stars as actress Georgia Lorrison in the flick and Douglas adapts the string-pulling and aspiring Jonathan Shields, Hollywood producer. “The Bad and the Beautiful” stung the egos of many industry bigshots during its time and it currently reigns as the film with the most Oscar wins without a nomination for best picture – holding a respectable 5 wins.

Kirk Douglas and Jan Sterling in 'Ace in The Hole' (1951).  (Paramount Pictures)

Another film that likely struck a chord with media members at the time of its debut, “Ace in the Hole,” saw Douglas in one of his most vulnerable roles as the callous, binge-drinking reporter Chuck Tatum who had been all but dismissed from every large publication in the industry before landing at a small-town newspaper in Albuquerque, N.M. When a man finds himself trapped in a mine, Tatum relishes at the opportunity in front of him to land his next big story and Tatum soon finds out at what cost. The Billy Wilder media flick would mark the first time Wilder wrote, directed and produced his own project from the ground up. The film would also receive an Oscar nomination for its writing.

Check out these other impressive films starring the revered Kirk Douglas, many of which the late icon had a hand in producing: