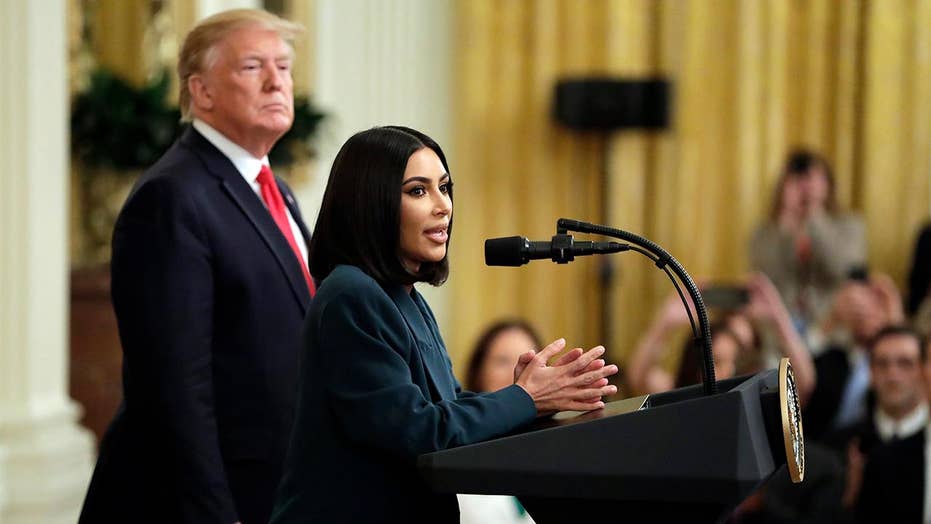 Initially seated between Jared Kushner and Ivanka Trump, Kardashian, 38, was met with applause after President Trump mentioned the reality star in his opening remarks.

"It really is such an honor to be here today," Kardashian, who has been advocating for criminal justice reform issues, said when she took the podium. She called Trump's support of the "Second Chance" program "magic," and added that the initiative had partnered with rideshare organization Lyft to hand out gift cards for reformed criminals to get to and from job interviews.

"My whole journey with criminal justice reform started about a year ago when I came to see the president after speaking to Ivanka and Jared who really fought for me to get here and I pled the case of Alice Johnson who the president granted clemency to," Kardashian said.

She continued: "And after that I really spent so much time going to different prisons because I really had no connection to anybody on the inside and really just felt like for me, I'm at the place in my life that I wanted to make a difference and just wanted to do the right thing, but I didn't know how or what to do or even really what was going on."

After visiting different prisons, Kardashian said her "heart just completely opened up" and she "wanted to do more," so she started to study the law.

Kardashian went on to introduce the new rideshare partnership. "I'm so happy to be here today amongst people that want the same thing and that really believe in supporting their re-entry."

She added: "I just want to thank the president for really standing behind this issue and seeing the compassion that he's had for criminal justice has been really remarkable."

Earlier on Thursday, the "Keeping Up with the Kardashians" star tweeted a video of herself en route to the event.

"I am heading to the White House to speak at the second chance hiring and reentry event," she said, adding in another tweet that she was "honored to be a part of the announcement that the administration and the private sector are stepping up to create opportunities for these men and women to succeed once home."

Kardashian has been at the White House several times to discuss criminal justice reform issues and successfully lobbied President Trump to pardon Alice Marie Johnson, who was serving life without parole for drug offenses.

White House officials have been working to make sure that prisoners released early -- because of the passage of the First Step Act -- have the tools and jobs they need to successfully adjust to life outside of prison.

More than 1,000 federal inmates have had their sentences reduced because of the legislation, according to a recent report by the U.S. Sentencing Commission.