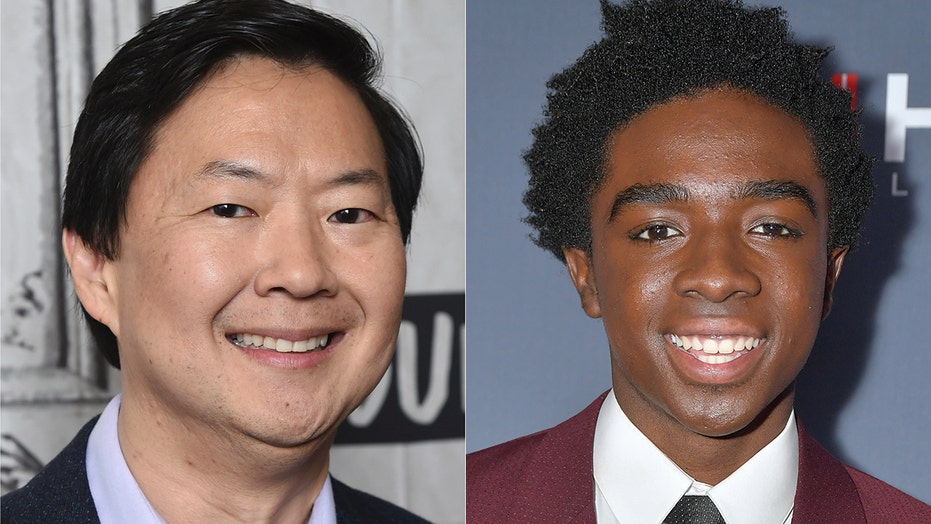 Actor and “The Masked Singer” panelist Ken Jeong and “Stranger Things” star Caleb McLaughlin are teaming up with the American Cancer Society (ACS) and the NFL’s Crucial Catch campaign in a concentrated effort to combat cancer.

Through its partnership with the NFL’s Crucial Catch initiative, the ACS, along with Jeong and McLaughlin, will present a one-of-a-kind experience to a lucky NFL fan at Super Bowl LIV in Miami. The lucky recipient will have the opportunity to take in the big game with McLaughlin and a special meet-and-greet with the venerable Jeong prior to kickoff.

For Jeong, 50, providing the experience of a lifetime for one lucky fan is something that carries significance for the actor, who is a former medical doctor and his wife, Tran, is a breast cancer survivor.

The Vince Lombardi Trophy is lifted into the air after the New Orleans Saints defeated the Indianapolis Colts in the NFL's Super Bowl XLIV football game in Miami, Florida, February 7, 2010.  (REUTERS/Mike Segar)

“I am thrilled to be partnering with the NFL and American Cancer Society in the fight against cancer at Super Bowl LIV. This is a cause near and dear to my heart as my wife is a breast cancer survivor herself,” said the funnyman. “The NFL and ACS will be able to provide cancer screenings and treatment to so many people in need.”

Additionally, the ACS and the NFL will offer the Crucial Catch Super Bowl Sweepstakes winner and a guest round-trip airfare to Miami, lodging, pre-game sideline passes, access to the hottest parties in Miami and other exclusive perks.

Of the all-encompassing VIP experience, McLaughlin, 18, said he couldn’t jump at the opportunity to support the ACS’ commitment to increasing overall access to care in underserved communities fast enough.

“There is no discrimination when it comes to cancer. It affects everyone, especially those in the underprivileged communities that can’t afford to get the screenings they need,” McLaughlin explained. “For this reason, I am truly happy to be partnering with the NFL and the American Cancer Society for the 2020 Super Bowl. One hundred percent of the funds raised will help benefit the many people who are in desperate need of lifesaving screenings [and] treatments.”

Actor and “The Masked Singer” panelist Ken Jeong, left, and “Stranger Things” star Caleb McLaughlin are teaming up with the American Cancer Society and the National Football League’s Crucial Catch Campaign in a concentrated effort to combat cancer. (AP/Getty)

The ACS is in just its second year partnering with the NFL to grant lucky fans access to a star-studded affair. Last year, lifelong New England Patriots fans' dreams came true when actress Vanessa Hudgens enjoyed the game with them while they watched their team win it all in Atlanta.

Since 2009, the NFL and American Cancer Society have partnered in the commitment to the fight against cancer. Crucial Catch helps more people catch cancer early, when it may be easier to treat, and focuses on the prevention and early detection of multiple cancers, particularly in high-risk communities.

“We’re so thankful for Ken and Caleb’s commitment to the fight against cancer,” said Sharon Byers, chief development, marketing and communications officer of the American Cancer Society. “What better way to enjoy the NFL’s biggest game than raising funds for the fight and mingling with some of today’s biggest stars."

NFL fans can enter the sweepstakes at CrucialCatch.NFL.com by donating a minimum of $10 to the American Cancer Society.