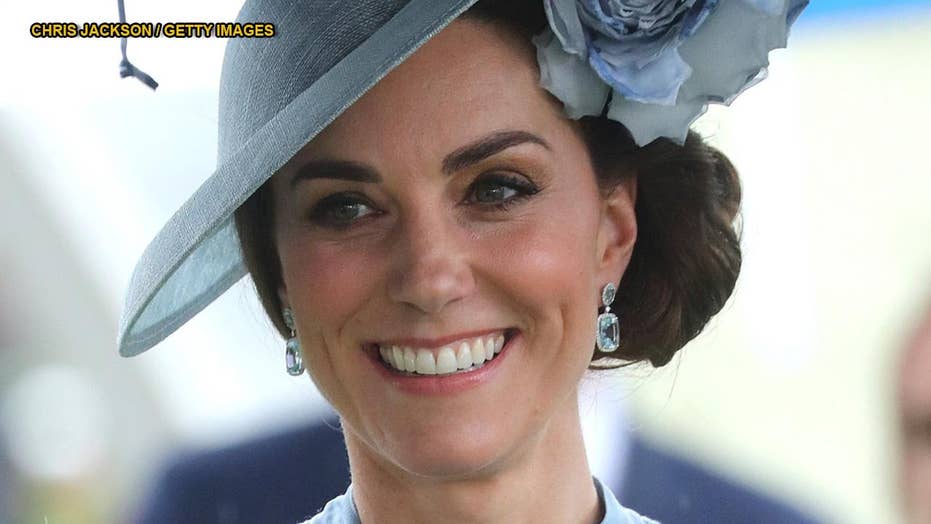 The Duchess of Cambridge was dressed for the winner’s circle on Tuesday, arriving at the first day of the Royal Ascot in a semi-sheer, pale blue Elie Saab dress and matching hat.

Queen Elizabeth has handed over a major role to her granddaughter-in-law.

Kensington Palace announced on Tuesday that Kate Middleton is the new patron of the Royal Photographic Society, a role that the reigning monarch has held since 1952, the same year as her coronation.

The Duchess of Cambridge will be following in the footsteps of Queen Victoria and Prince Albert, who originally became patrons of the Royal Photographic Society in 1853, the year it was founded.

And the role is a special one for the 37-year-old future queen. People magazine reported Middleton studied art history at the University of St. Andrews and had called herself an “enthusiastic amateur photographer.” It was there where Middleton met her now-husband, Prince William.

Middleton became a member of the royal family in 2011. William is the queen’s grandson and second in line to the throne.

She is already the patron of London’s National Portrait Gallery.

Britain's Kate the Duchess of Cambridge sits, during a visit to the Henry Fawcett Children's Centre in Kennington, London, Tuesday, March 12, 2019. (Arthur Edwards/Pool Photo via AP)

“As a student at the University of St. Andrews, I chose it as the subject of my undergraduate thesis and photographs of children in particular, which feature prominently in the exhibition, are of real interest to me,” Middleton wrote in a foreword for a 2018 exhibition at the National Portrait Gallery, per the outlet.

Back in April of this year, royal expert Rebecca Long told Us Weekly the duchess is clearly preparing for the queen role.

“Kate’s been taking on new responsibilities little by little over the last few years, so it won’t be a shock when the time comes,” Long explained. “William and Kate are the favorite royals to take the crown in many generations, so the people of the U.K. are very excited about it.”

Elizabeth, 93, is also determined to show Middleton how to settle into her future title gracefully in the public eye.

“She’s really taken Kate under her wing,” a source close to the royal family told Us Weekly. “The two of them will often spend hours discussing royal life and the future of the monarchy.”

“It’s taken a long time for Kate to get to where she is today,” added a second insider. “But she’s ready.”

That same month, Elizabeth named Middleton as a Dame Grand Cross of the Royal Victorian Order, which is considered the highest possible rank for a British royal.

The honor came on the eighth wedding anniversary of the Middleton and William and just weeks after the two women stepped out for their first-ever joint outing to visit King’s College’s Strand campus in London.

According to People, the Royal Victorian Order was created by Queen Victoria in 1896 to allow her to recognize people who helped her or represented her. The ruling monarch personally selects who is given the honor.

Previous Knights and Dames Grand Cross include Elizabeth’s sons Prince Andrew and Prince Edward, as well as Camilla, Duchess of Cornwall. People reports the position of Grand Master of the Order was created in 1937 and was occupied by the Queen Mother until her death in 2002. Elizabeth, 93, then appointed her daughter, Princess Anne, to the spot in 2007.