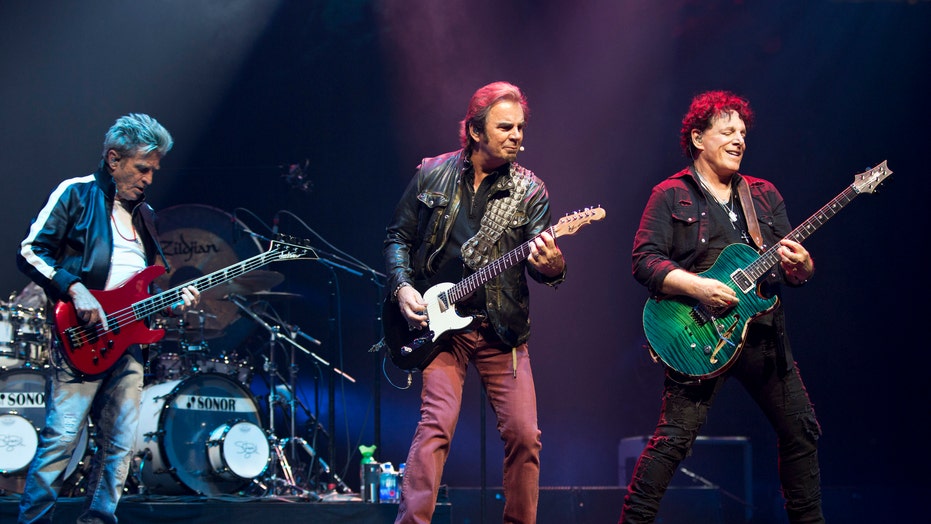 Two members of Journey have been kicked out of the band amid the filing of a lawsuit over its trademark.

The legendary band's bassist, Ross Valory, and drummer, Steven Smith, were kicked out of the group after guitarist Neal Schon and keyboardist Jon Cain filed a lawsuit against the two, accusing them of attempting a "coup" to gain control of the band's trademark, according to a complaint obtained by Fox News.

Schon and Cain accuse their former bandmates of declaratory judgment and breach of fiduciary duty and are seeking damages in excess of $10 million.

According to the complaint, Schon and Cain accuse Valory and Smith of attempting to take control of the trademark last month by "improperly" holding meetings with shareholders and the board of directors of one of the band's corporate entities named Nightmare Productions. In these meetings, Smith was voted to replace Cain as board president and Valory was voted to replace Schon as secretary, the outlet said.

Schon and Cain claim their former bandmates incorrectly assumed they had rights to the Journey name.

Founder and guitarist Neal Schon of the band Journey is seen at Prudential Center on June 15, 2018. (Brian Ach/Getty Images for Journey)

The plaintiffs cite two trademark registration numbers and cite a trademark license agreement from 1985 to prove their ownership of the band name.

The two band members further claim Valory and Smith want Nightmare Productions to "pay them a share of Journey touring revenue in perpetuity under the guise of a licensing fee while they perform absolutely no work for the band."

Schon and Cain accuse their former pals of concocting a "malicious" and "very ill-conceived" scheme in order to "set themselves up for retirement."

Bassist Ross Valory and drummer Steve Smith of the band Journey are seen at Prudential Center on June 15, 2018. (Brian Ach/Getty Images for Journey)

Journey formed in 1973 and quickly became known as one of the world's most successful rock bands, with 10 platinum albums, 18 Top 40 singles and over 75 million albums sold worldwide, a press release from the law firm representing Schon and Cain states.

Schon and Cain officially removed Smith and Valory from Journey in a letter dated March 3, the release explains.

Attorneys for Valory and Smith did not immediately respond to Fox News' request for comment.

Skip Miller, attorney for Schon and Cain, provided a statement on their behalf in a news release this week.

“This is not an action that Neal and Jon wanted to bring against two men that they once considered their brothers, but the devious and truculent behavior of Steve and Ross left them reluctantly with no choice but to act decisively. Journey will continue on with great success by ridding the band of disruptive members and replacing them with top musicians; and most importantly, by keeping its essential members—Schon, Cain and Pineda—fully intact.”