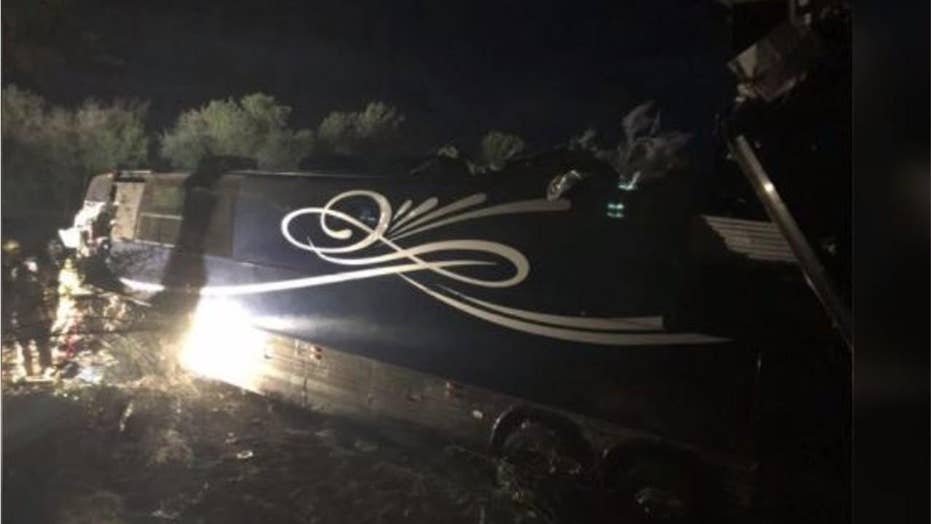 One of Josh Turner’s tour buses was involved in a fatal crash. The country star’s road crew was traveling on a bus in San Luis Obispo County, California when the driver lost control and plunged the bus into an embankment. The accident led to the death of one and injuries to seven others.

Josh Turner said it's a "struggle to put into words the devastation and grief" he and his road family are feeling after a bus crash killed one member of his crew and injured seven earlier this month.

The country singer, 41, took to Facebook on Tuesday to address the tragic accident and ask fans for their continued prayers. He also shared kind words about the man who died in the crash.

“As I try to write this I don’t know what to say. It’s a struggle to put into words the devastation and grief that our road family is trying to process. We lost a beloved member of our team, David Turner,” the singer wrote. “He was like a brother to so many in this industry and a devoted husband, father and grandfather. Please continue to keep David [Turner's] family in your prayers.”

David Turner, 64, who was not related to the singer, worked as the star's sound engineer for almost 14 years.

Josh’s post continued: “All of our crew suffered significant injuries and many have long roads to recovery. I would ask that you give them privacy during this time.”

Josh Turner performs in Nashville, Tenn., in March 2018. A tour bus carrying his crew crashed in September 2019, killing one and injuring seven. (Getty)

Turner revealed that his management company created a GoFundMe page where fans can donate for the injured crew members’ recovery.

“Your prayers have been felt. Please keep praying,” he concluded the post.

Turner and his band were not on the bus at the time of the crash.

JOSH TURNER ON FAITH-BASED ALBUM: IT'S A 'GOD-ORDAINED BLESSING'

Last week, the vehicle carrying David Turner was going eastbound on Highway 46 in San Luis Obispo County, Calif., after a show at the Vina Robles Amphitheatre in Paso Robles. According to the San Luis Obispo Fire Department, the bus went off the roadway, plunging into an embankment.

This Wednesday, Sept. 18, 2019 photo provided by the California Department of Forestry and Fire Protection (Cal Fire) shows the scene of the wreck of a tour bus that crashed while carrying the road crew for country Josh Turner, leaving one dead and seven injured, on Highway 46 near Shandon in Cailfornia's Central Coast region.

The bus left the road for unknown reasons then continued along a dirt shoulder before smashing through a fence and plunging off the cliff, the California Highway Patrol said at the time. The bus landed upright in a dry riverbed. The cause of the crash off the 50-foot cliff is under investigation, the San Luis Obispo Tribune reported.

The crew was headed to a concert in Washington. The singer postponed the rest of his September tour dates following the crash, Universal Music Group Nashville said in a statement.

Turner's reps told Fox News in a statement shortly after the crash: "Josh Turner and his road family have suffered a devastating loss.  Please keep the crew, band and Josh in your thoughts and prayers. All remaining shows in September will be rescheduled for a later date."