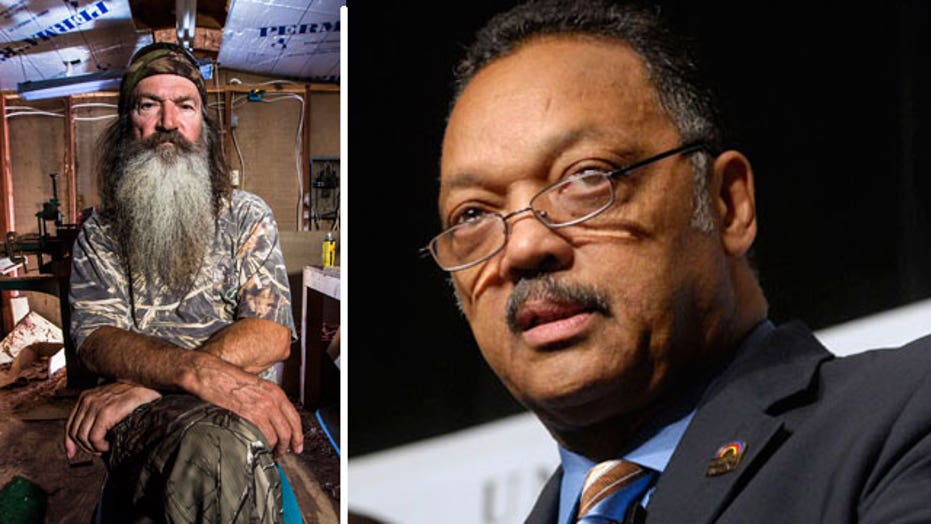 Jesse Jackson decided to share his thoughts on Phil Robertson, weighing in on the controversy that's been heavily debated by "Duck Dynasty" fans and critics alike.

In a statement to FOX411, Jackson opened up about Robertson's comments in a GQ interview, during which the A&E star made negative, graphic statements about homosexual sex and the lack of racism in pre-Civil Rights South.

Jackson charged that the Robertson family patriarch, who was suspended indefinitely from his reality show, is worse than the driver who told Rosa Parks to give up her seat.

“These statements uttered by Robertson are more offensive than the bus driver in Montgomery, Alabama, more than 59 years ago,” Jackson said in a statement. “At least the bus driver, who ordered Rosa Parks to surrender her seat to a white person, was following state law. Robertson’s statements were uttered freely and openly without cover of the law, within a context of what he seemed to believe was ‘white privilege.’”

Jackson and his Rainbow PUSH coalition are demanding to meet with A&E and Cracker Barrel, who briefly pulled "Duck Dynasty" merchandise off its shelves before quickly deciding to sell the products again.

"We are requesting a sit down meeting with the CEO of Cracker Barrel and A&E in the next 72 hours to discuss our position," a statement said.

When the "Duck" dad was speaking with the magazine, he opened up about  growing up in pre-Civil Rights era Louisiana.

“I never, with my eyes, saw the mistreatment of any black person... The blacks worked for the farmers. I hoed cotton with them," Robertson said. "I’m with the blacks, because we’re white trash. We’re going across the field.... They’re singing and happy. I never heard one of them, one black person, say, ‘I tell you what: These doggone white people’—not a word!”

Robertson also discussed homosexual sex, using graphic descriptions that outraged many, including the group GLAAD, who demanded that A&E take action to silence the star.

He was swiftly suspended from the series, and his family has since stated that they "cannot imagine the show going forward without our patriarch at the helm."

A&E has not released any further information about the fate of their No. 1 show. "Duck Dynasty's" fifth season is set to premiere on Jan. 15.