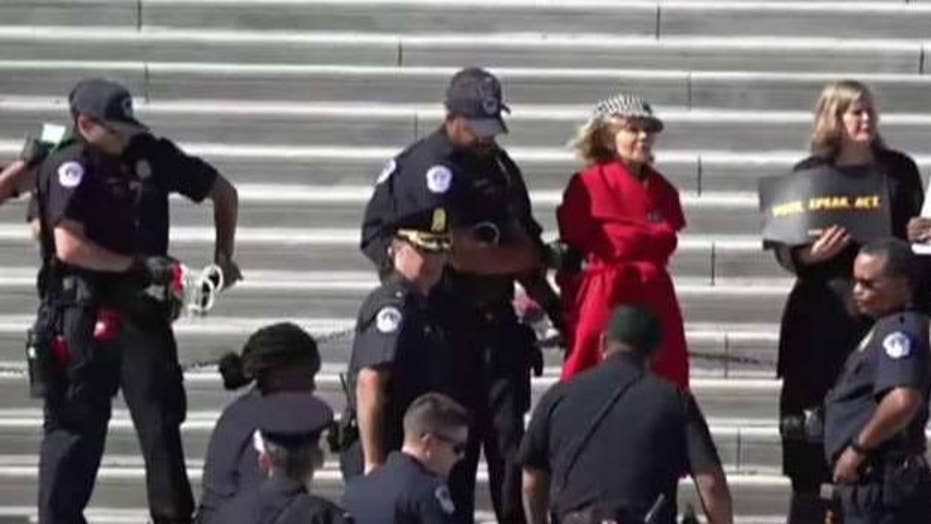 Actress Jane Fonda claimed she’s been a climate scientist for "decades" prior to being arrested at a demonstration in Washington D.C. on Friday.

Speaking on ABC News’ “The Briefing,” the 81-year-old liberal star made the bold claim that she’s personally been studying climate science for many years, which she says played a part in her decision to commit herself to engaging in regular activism.

“I’ve been a climate scientist for decades and decades, but it was Greta Thunberg, this little Sweedish girl holding her sign every Friday in front of the Sweedish Parliament,” Fonda explained. “And all the student strikers all over the world who have really risked a lot and given up a lot in order to say, ‘Wake up old people. How come you’re not standing with us? You’ve taken our future away!’”

Despite the actress' claims, she did not elaborate on the extent to which she's educated herself on climate change or what she specifically studied. The Washington Times noted that she attended Vassar College, where she studied physiology but did not graduate.

Fox News confirmed that Fonda was among 16 people arrested on the Capitol steps Friday, according to U.S. Capitol police. The actress was charged with "crowding, obstructing or incommoding." She was there to rally alongside other climate change activists.

Jane Fonda revealed she had a cancerous growth removed from her lower lip recently. (Reuters)

According to video obtained by WUSA9 reporter Mike Valerio, U.S. Capitol police in Washington D.C. appeared to take Fonda into custody with her hands zip-tied behind her back as a crowd of onlookers cheered.

"We love you Jane," the crowd shouted in the video.

Reps for the actress did not return Fox News' request for comment.

The arrest comes after Fonda, a liberal Hollywood celebrity long known for activism and outspokenness, said she soon planned to leave Tinseltown and relocate to the nation’s capital, at least temporarily.

And according to the Los Angeles Times, the actress had a goal in mind--to get arrested.

Fonda told the newspaper she planned to spend about four months in Washington for a series of sit-ins and rallies – after getting an OK from Netflix to take time off from her series “Grace and Frankie” with Lily Tomlin.