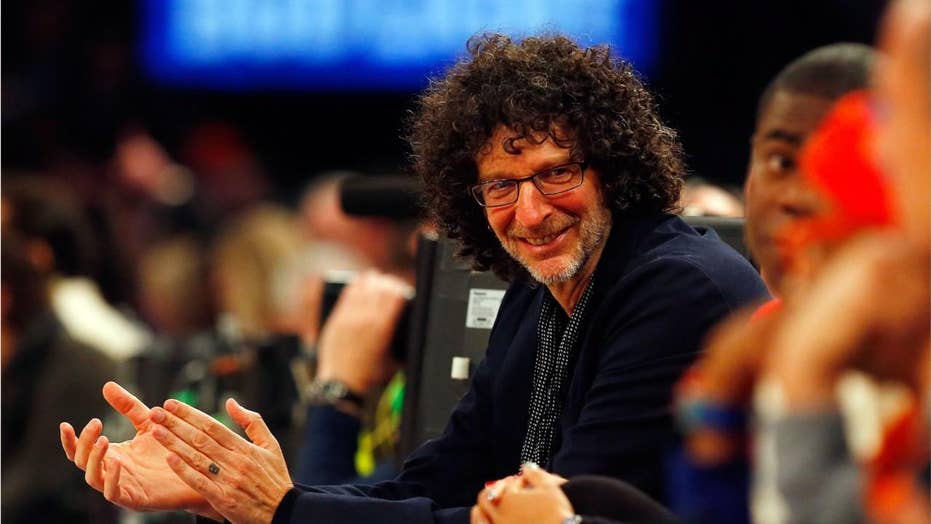 Radio host and author Howard Stern joked about President Trump's appearance on Thursday, suggesting that he wasn't in a position to rate women by their physical attractiveness.

Stern made those comments while on "The View," where he discussed Trump's multiple visits to his radio show over the years. Co-host Sunny Hostin noted how the president, according to Stern's book "Howard Stern Comes Again," rated women, causing her to express apparent disbelief.

"I'm reading the book like 'why is Trump rating women from 1 to 10? Donald Trump!" she exclaimed with her finger in the air.

In an apparent joke, Stern responded by saying: "Because he's so hot, sexually, he's so good-looking that he has earned the right."

President Donald Trump arrives at the White House in Washington from a trip to Louisiana, May 14, 2019. (AP Photo/Manuel Balce Ceneta)

Stern, who has hosted Trump on his program a number of times, also recounted on "The View" a time when the now-president was "bragging" about how he "stole" gossip columnist A.J. Benza's girlfriend.

"It was unbelievable. They start yelling at each other, and what are they fighting over? A woman," Stern said.

"A.J. had a girlfriend and Trump was having sex with her. And Trump was on the air bragging that he stole A.J.’s girl and he was better sexually than A.J."

The episode comes after the radio host earlier this week lamented his role in helping to raise Trump's public profile. "The way I helped Donald was I let him come on and be a personality. Whether you liked him or not, people related to him as a human being,” he said.

Stern said that he wished he could have boosted Trump's opponent, former Democratic presidential nominee, Hillary Clinton, instead.

"I thought that perhaps if she came on my show, we could've stripped away some of the pomp and circumstance or the tightness that comes with running for president and, like Donald, she could've been seen in a different light," he said of Clinton.

On "The View,' Stern also said that he was a "huge Hillary Clinton supporter" and thought it would have helped her candidacy if she went on his show.

"Again, I don't say this would have changed the election, but I think if she would have come on the show -- I was begging her, I didn't talk to her directly. I think she was afraid of me, and justifiably," he said.