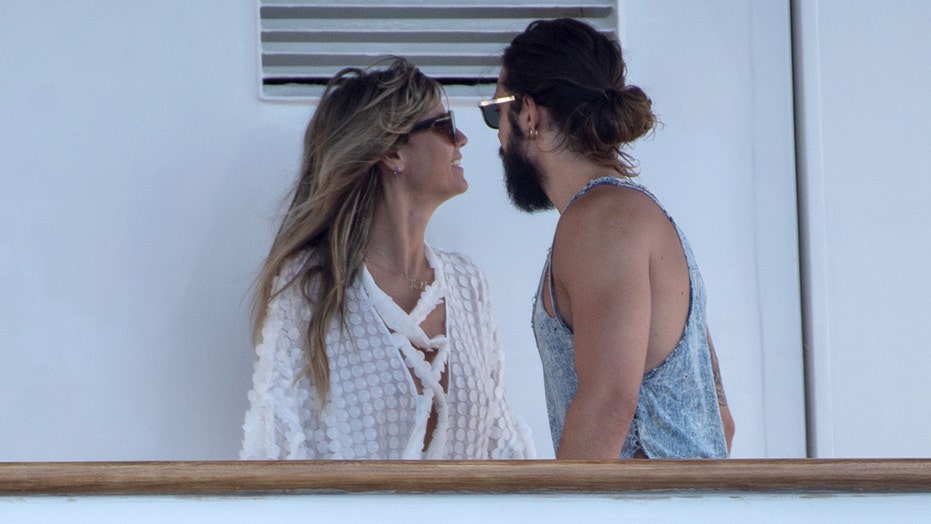 Heidi Klum looked amazing in an ornate ivory wedding dress today as she tied the knot with her husband Tom Kaulitz for a second time.

Tom, 29, couldn't take his eyes off his beautiful bride, 46, as they said their vows underneath a floral awning on the deck of the luxury Christina O yacht.

Heidi Klum and Tom Kaulitz are seen on the Christina O. yacht during their wedding day on August 03, 2019 in Capri, Italy. (Ivan Romano/Getty Images)

As the sun set, the disco lights went on and the guests partied into the night with glasses of bubbly.

Yesterday the couple were seen passionately kissing as they prepared for their nuptials in front of their nearest and dearest, six months after secretly tying the knot in LA.

The model wowed in a white lace bridal gown as she sat beside her man on the famous vessel, once owned by former First Lady Jackie Kennedy's husband Aristotle Onassis.

Tokio Hotel guitarist Tom looked dapper in a green blazer and white chinos, and the pair both enjoyed a flute of rosé fizz.

The Christina O dates back to 1943 when it began life as a Canadian warship before being converted into a luxury yacht.

Heidi secretly wed her toyboy fiancé Tom in a low-key ceremony back in February.

HEIDI KLUM MODELS IN LINGERIE WITH SNAKES AROUND HER NECK

The wedding coincided with the date they first met, February 22.

They announced their engagement in December, with Heidi showing off her enormous diamond ring on social media.

Sharing a picture of them together, Heidi told her fans: “I SAID YES!”

Her followers inundated her with their messages of congratulations.

The mom-of-four was previously married to singer Seal but they split in January 2012.

Heidi previously sparked engagement rumors back in September after she showed off a very large diamond on her ring finger at the 70th Emmy Awards.

HEIDI KLUM, 46, LIKES TO BRUSH HER TEETH WHILE TOPLESS

She insisted the sparkler was borrowed by insiders said it wouldn't be long until Tom popped the question.

The "America’s Got Talent" judge admitted dating the hunk, who is 17 years her junior, has led to a lot of questions about her age.

She told InStyle: “Lately, I'm being reminded more about my age by people other than myself.

“My boyfriend is many years younger than me, and lots of people are questioning that and asking about it.

“That's really the only time when age seems to be shoved in my face and I have to give an answer for it.

“I don't really think about it that much otherwise.

"You have to just live a happy life without worrying too much about what people think because worrying is only going to give you more wrinkles.”

Heidi and Tom got together following her split with art dealer Vito Schnabel after three years together.