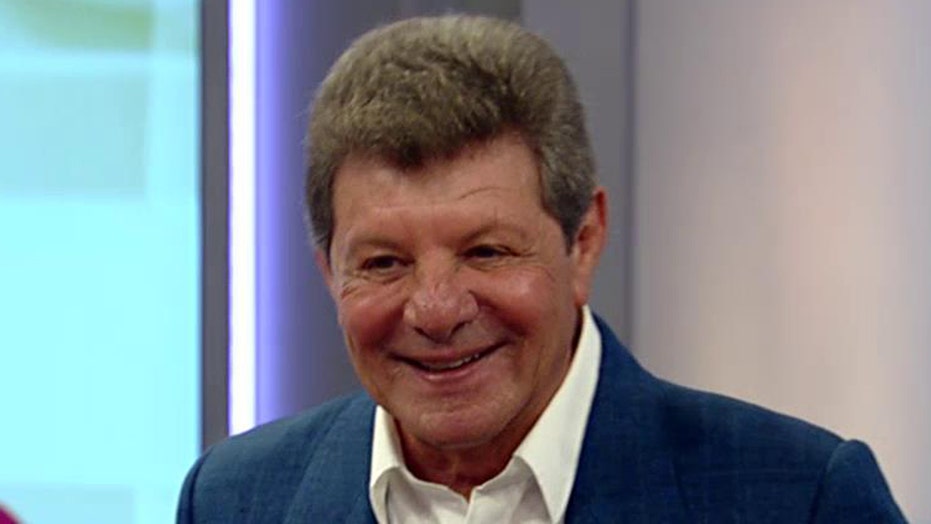 From his years as a teen heartthrob starring with Annette Funicello in "Beach Blanket Bingo" and his string of bestselling singles and albums, Frankie Avalon is an entertainment legend. He's also an accomplished amateur cook, specializing in Italian food and he just published a cookbook entitled "Frankie Avalaon's Italian Family Cookbook From Mom's Kitchen to Mine and Yours." The 75-year-old, who has been married to his wife Kay for over half a century, talked to FOX411 about the book and his long career.

FOX411: Why a cookbook?
Frankie Avalon: It’s something I’ve been thinking about for years and years and finally I got together with someone from publishing who said, ‘You know what? You ought to do a cookbook’ and I said, ‘Everyone’s been telling me about this.’ I’ve got a large family, 8 children, 10 grandkids, a lot of relatives and friends and so I said, ‘Let’s talk about it.’ And we had a couple of meetings, what the concept was, what I wanted to represent as far as a cookbook and it worked out. It was a long involvement of putting my recipes together. I’m very happy with the book.

FOX411: You’re a serious home cook.
Avalon: I’m not a chef, I’m a cook. Towards the end of my mother’s life I said, ‘Ma, you’ve got to write these recipes down’ and she did and my sister had some. So a lot of the recipes of Italian food that my mother was really great at doing are in this book. That’s why I’m so proud of it. There are recipes in there that are so unique that I remember growing up as a young Italian kid my mother making.

FOX411: You say that you don’t believe it when people say they don’t have time to cook.
Avalon: No I don’t believe it. The fun of cooking is the fun of communicating with people, even if it’s just two people. As you’re cooking, you’re talking, you’re having a glass of wine. It’s wonderful, it’s an experience. Once you get into cooking it becomes something that you really look forward to doing.

FOX411: And it bonds a family together.
Avalon: Absolutely. And I’m sure you and a lot of people, when you have guests over or your family, everyone gathers in the kitchen.

FOX411: Eight children! That’s a lot.
Avalon: And ten grandkids. I still have the tradition of Sunday dinners at my house and I make all kinds of different Italian foods and there’s a lot of fun going on. That’s been a ritual for me and that’s what I wanted to relay with this book that tradition is very important to me.

FOX411: For a lot of people they’ll always remember you with Annette Funicello and it was so sad how she died.
Avalon: Oh God you have no idea what a debilitating disease (MS) is and she fought it and suffered. The last leg of her life was really not pleasant at all. But you know she fought it and she was a wonderful gal and I miss her. She’s gone but not forgotten.

FOX411: Did you stay in contact with her till the end?
Avalon: I tried. There was a time where she couldn’t communicate at all. I would call and talk to her husband and leave messages and send flowers.

FOX411: And you’re still touring.
Avalon: Yeah I’m out there singing a few of the old songs because some old people just want to hear them and some of the young people. Every song of mine to a young person is new so that’s good.

FOX411: How did you manage to stay married for so long?
Avalon: You know there’s this one word that really sums it up, it’s called love and if you have that basic love then things that happen in a marriage, good, bad or indifferent, as long as you have that love... Respect is another word. It’ll be 53 years coming up in January so we’ve got a wonderful relationship.