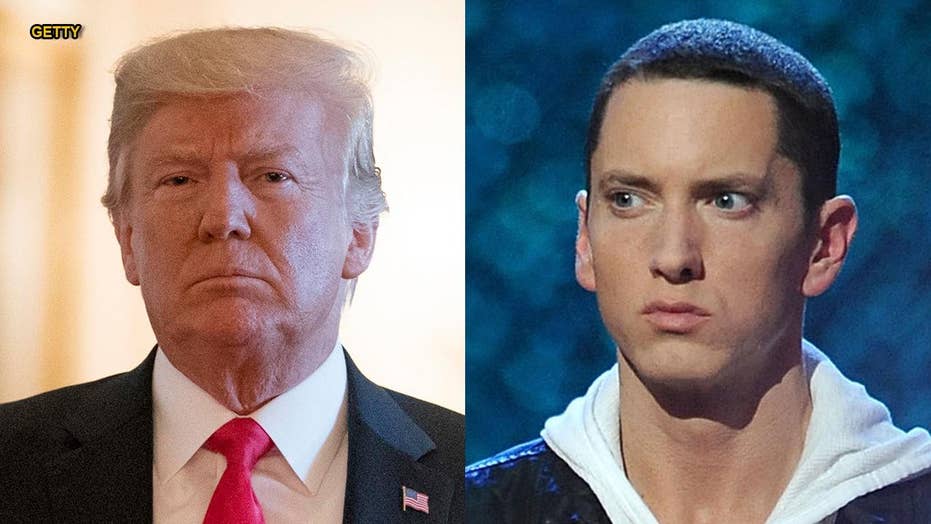 After releasing a new surprise album, titled 'Kamikaze,' Eminem appeared to reignite his feud with President Trump, with some of his new songs taking jabs at the commander in chief.

Eminem released a surprise album Thursday night and appeared to reignite his feud with President Trump, with some of his new songs taking jabs at the commander in chief.

On the song “The Ringer,” the first track off the Detroit rapper's new album “Kamikaze,” Eminem claims Trump sent the U.S. Secret Service to meet him face to face.

Trump “sent the Secret Service to meet in person, To see if I really think of hurtin’ him him, or ask if I’m linked to terrorists,” Eminem raps.

“I empathize with the people this evil serpent sold the dream to that he’s deserted,” he says of Trump.

In the same song, Eminem makes a reference to Vice President Mike Pence’s private parts, and takes parting shots at up-and-coming rappers Lil Pump, Lil Xan and Lil Yachty as well as the media for the poor reviews of his previous album “Revival,” according to The Guardian.

Eminem, whose real name is Marshall Mathers, also makes a reference to the Harvey Weinstein scandal on the song “Not Alike.”

Eminem has taken shots at Trump plenty of times since the business mogul took office. In December, he told Vulture he hoped the president “gets impeached.” He added that Trump “makes his blood boil.”