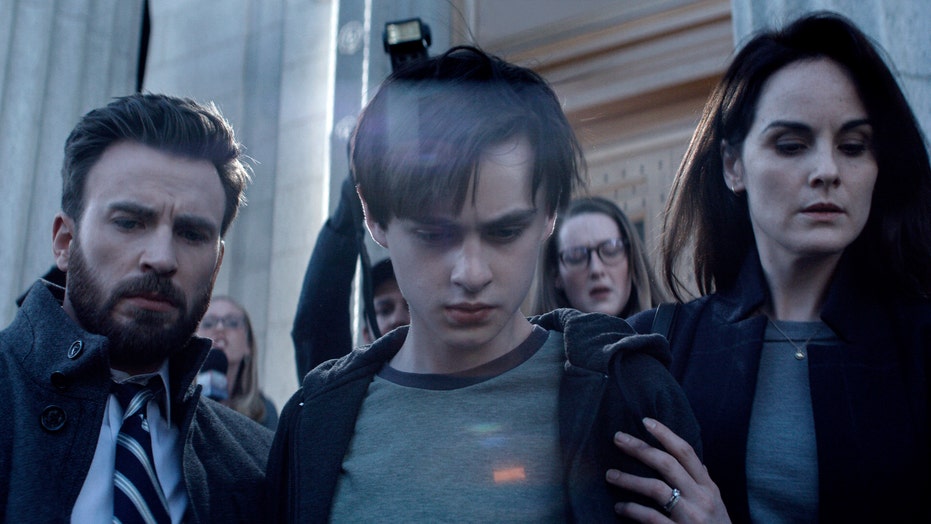 It was all fun and games on the "Defending Jacob" set outside Boston, according to writer-showrunner Mark Bomback and director Morten Tyldum.

Ping pong tournaments and listening to podcasts created a lighthearted dynamic despite the grim plot of the Apple TV+ limited series adapted from the bestselling book by William Landay.

Chris Evans stars as Andy Barber, an ADA whose son Jacob (Jaeden Martell) is charged with murdering his classmate.

Jacob maintains his innocence but mom Laurie's (Michelle Dockery) faith waivers, which only intensifies Andy's determination to prove his only child isn't capable of such a violent act.

Fox News: What was the most challenging aspect of developing the TV series from a well-known book?

Mark Bomback: The exciting part of adapting it was to retell [the story] with more opportunities to go into detours with all the other characters and really learn who Laurie [and others] are as people. We changed a few of the characters [so we could] broaden them out.

Morten Tyldum: We want to follow the story enough [for fans] to be satisfied, but at the same time feel like we can surprise people. We do enough small changes that people feel like, wait a minute, what's actually going happen?

ALL THE CELEBRITIES STARTING ENTERTAINMENT PROJECTS DURING CORONAVIRUS

Fox News: What was your strategy in balancing a family drama with a tragic crime-thriller story?

Chris Evans (L) and Michelle Dockery (R) in a scene from 'Defending Jacob.' (Apple TV Plus via AP)

Fox News: What kind of discussions did you have with Chris, Jaeden, and Michelle about creating a believable family dynamic on screen?

Tyldum: You have to really believe this family and care for this family for this series to work and neither Chris nor Michelle are parents in real life, so those were the first discussions -- figuring out the physicality of this family.

We're lucky, especially between Chris and Michelle because you get that clarity. This is your partner and somebody you've been with for, you know, 18 years. It's second nature to touch them in a certain way. [That connection] was something that was I was very conscious of and that I'm very happy with.

If you look through the scenes, you can see how natural they are together, how they move around each other. And that's really something that was very important to us.

And with Jaeden, it was more like he's a teenager. He's someone who isn't very open. He's like, 'I can't tell you everything, Dad.' It's like there will be things that I need to lie to you about. We wanted Jacob to be like a mystery, an enigma. That's something that's that we talked about.

Fox News: It's fair to say in the series that what's not said is just as important as what is said. Mark, how did you go about writing that?

Bomback: As a screenwriter, you have two tools, right? You have action and dialog and that's the entire extent of how you're going to communicate. And to me, as in real life, usually people don't say exactly what they mean. And especially teenagers -- they are rarely telling you exactly what they mean. So I know as an audience member, I love a scene where I'm processing it and I'm starting to understand it as it's unfolding. What they're really saying to each other is this and yet no one has said any of this out loud so far. I think it's doubly interesting when it's family because families have shorthands anyway.

Fox News: How was it working with Chris in an acting and executive producer role?

Tyldum: He is someone who can very easily change hats on set. When he was on set, he was Andy Barber. He was seeing the scenes like how Andy Barber would see them.

And then when we were not shooting in between all that, we watched cuts together [of scenes] and discussed things. He was very supportive and professional.