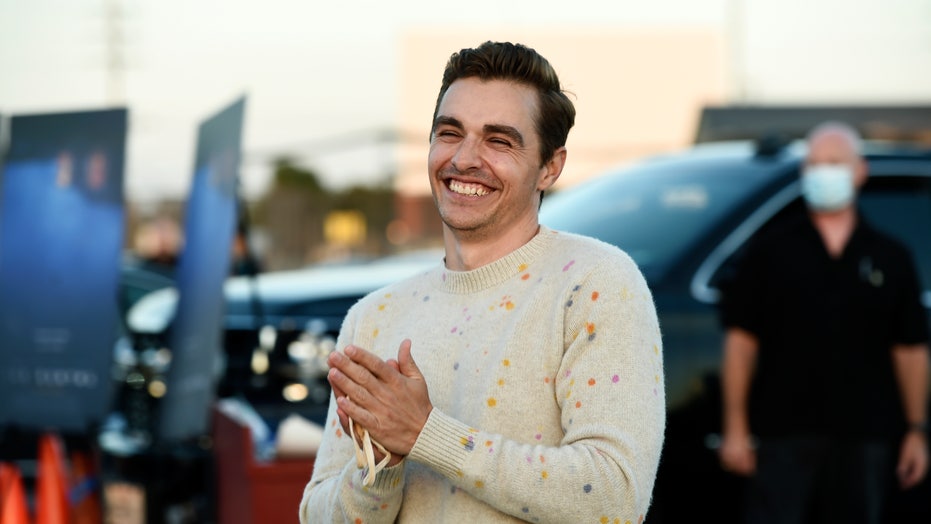 Dave Franco -- along with the rest of Hollywood -- is quickly transitioning from traditional ways of doing things into more socially distanced methods of performing formal tasks, and the actor and first-time director said the drive-in premiere for his debut film was “perfect” albeit “a little weird.”

Amid the ongoing coronavirus pandemic, Franco, 35, elected to press forward with his film premiere for "The Rental" on Thursday and held the advance screening at the Vineland drive-in theatre in Southern California with more than 1,300 people on hand.

Along with wife and superstar actress Alison Brie, Franco was also joined by Dan Stevens and Sheila Vand. He took off his mask to pose for photographers in the center of a massive parking lot, then answered questions via Zoom from his car after the film ended.

Workers prepare to hand out concessions to drivers before an advance screening of the film "The Rental" at Vineland Drive-In, Thursday, June 18, 2020, in City of Industry, Calif. (AP Photo/Chris Pizzello)

“It didn’t feel like there was a spotlight on me or the cast. It felt more like this communal experience where everyone was just excited to get out of their homes and, you know, let loose with a group of fellow movie lovers. It was perfect,” he said in an interview Friday.

Franco said Brie calmed him down about the shortcomings of an outdoor screening: patchy audio over the FM radio and ambient light drowning out darker sections of his horror-thriller “The Rental.”

“Trust me, it is not what I do. I am a crazy perfectionist. I annoy everyone around me because I won’t stop until it’s perfect. And so it was hard for me to let go, but it was nice having Alison next to me — she forced me to let go,” he said.

Dave Franco, left, director/co-writer of "The Rental," and his wife, cast member Alison Brie, are seen on a movie screen as they take part in a Zoom Q&amp;A session from their car following an advance screening of the film at the Vineland Drive-In, Thursday, June 18, 2020, in City of Industry, Calif. (AP Photo/Chris Pizzello)

His movie is set to be released via video-on-demand and at drive-ins and traditional theaters on July 24. But the nation's largest theater chains have been adjusting their reopening plans regularly in response to health officials. Franco said that like many in Hollywood, he's tracking Christopher Nolan’s “Tenet,” scheduled for release July 31.

CORONAVIRUS NOT STOPPING DRIVE-IN MOVIES FROM CLOSING AS MANY POST BEST TICKET SALES AMID OUTBREAK: REPORT

“Obviously that’s the giant movie that everyone’s focused on and that all the theaters are really trying to open in time for that film. So we’ve just been kind of stepping back and monitoring ... If they’re not opening for ‘Tenet,’ they ain’t opening for us. ... I’m happy to creep behind Christopher Nolan all day.”

Franco is hoping to hold another premiere event closer to the film’s release — maybe even in a traditional theater. There’s something about the big screen.

Dave Franco, director/co-writer of "The Rental," poses at an advance screening of the film at Vineland Drive-In, Thursday, June 18, 2020, in City of Industry, Calif. (AP Photo/Chris Pizzello)

“Just seeing how many people are flocking to drive-ins around the country, it just proves that the movie-going experience is so special," Franco said. "There’s a lot of talk about the future of film being mainly digital. But I think right now we’re really seeing how much people love going to the movies.”