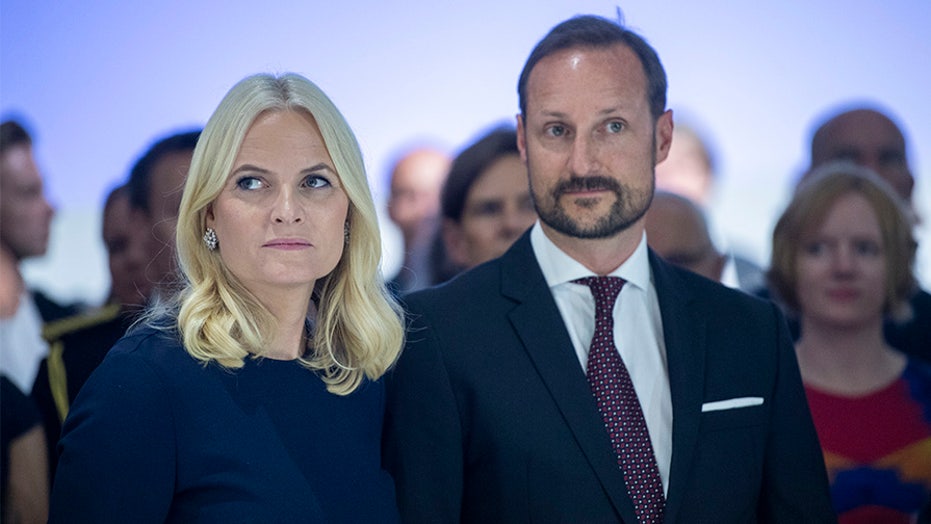 “I never would have associated with Mr. Epstein if I had been aware of the seriousness of the crimes he committed,” the 46-year-old told Norwegian daily publication Dagens Næringsliv on Monday.

“Through years of work with questions regarding international health issues, I have witnessed firsthand the kind of damage sexual assault does to women and children," she continued. “We all have a responsibility to fight sexual assault and to support the victims. I wish to express my deepest sympathy and solidarity to the victims of Jeffrey Epstein.”

A rep for the royal house of Norway confirmed to Fox News Mette-Marit stood by her statement to the outlet.

Crown Princess Mette-Marit of Norway addresses the opening of the Frankfurt Book Fair this past October. ((Photo by Frank Rumpenhorst / dpa / AFP))

The royal palace also confirmed to the outlet that Mette-Marit and Epstein met “socially, mostly in the United States.” One meeting did occur in Norway’s capital Oslo.

Varpe also shared the royal couple was not aware of Epstein’s past.

“In 2013, Mette-Marit chose to conclude her association with Mr. Epstein,” Varpe continued. “Partly, this was because she felt that Mr. Epstein attempted to trade on the relationship he had to the crown princess, and use it for his own gain in other relations.”

The outlet shared they had investigated any Norwegian connections Epstein may have had. According to their investigation, Epstein and Mette-Marit have met several times between 2011 and 2013 after being introduced through mutual acquaintances.

The outlet alleged Epstein attempted to bring one “Eastern European woman to Norway” eight or nine years ago. While Epstein visited Norway at least once during the 2010s, none of the private jets connected to the disgraced financier are registered as visiting Norway at that time.

Britain’s Prince Andrew is facing intense media scrutiny after Virginia Roberts claimed she was trafficked by Epstein and forced to have sex with the Duke of York on three occasions nearly 20 years ago.

Roberts, now known as Virginia Giuffre, spoke out on a BBC interviewing airing Monday evening in the UK where she addressed the 59-year-old’s denial of her allegations against him.

The BBC aired an interview with Prince Andrew Nov. 14, in which the second son of Elizabeth II discussed his friendship with Epstein and the sexual assault allegations against him. The royal claimed he had "no recollection of ever meeting" Roberts, "none whatsoever." The Duke of York also implied that a now-famous photograph showing him with his hand around Roberts' waist was doctored.

Photo from 2001 shows Prince Andrew with his arm around the waist of 17-year-old Virginia Roberts. In the background is Epstein's girlfriend Ghislaine Maxwell. (U.S. Second Circuit Court of Appeals)