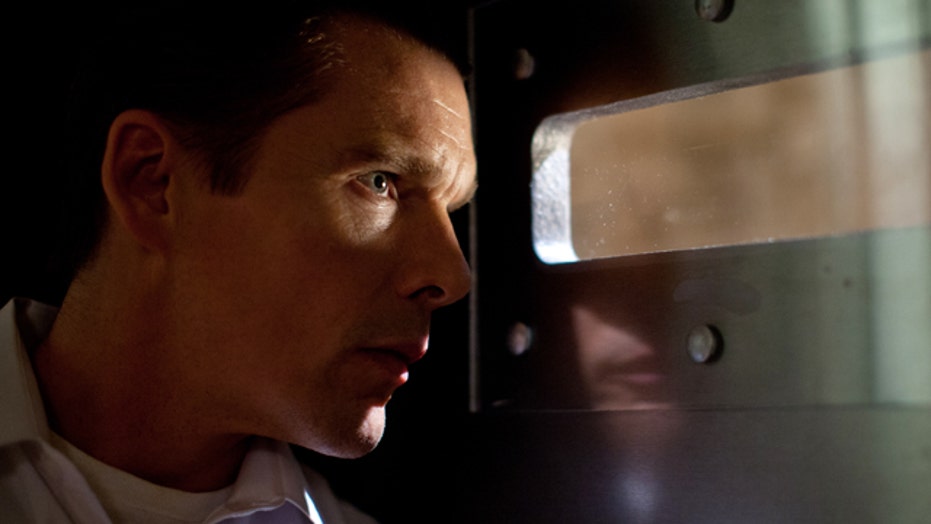 Ethan Hawke bunkers down in 'The Purge'

LOS ANGELES – In the new Ethan Hawke thriller “The Purge," the year is 2022, and the United States is run by a bunch of multinational corporations called the “New Founding Fathers of America.” The nation is ravaged by crime and overcrowded prisons, so in a quest to curb overpopulation and get rid of unsavories, the government has sanctioned an annual 12-hour period where anything goes in the streets.

Known as “The Purge,” all criminal activity – including murder, brutal violence and in this movie, a sinister home invasion – is legal, all emergency services and calls are suspended, and the only rules are that harming high-ranking government officials and using “Class 4” weaponry (bombs and grenades) are strictly prohibited.

But while the plot may seem on its surface like any of hundreds of other futuristic hellscape directorial visions from "Clockwork Orange" to "Oblivion," "The Purge" has been dubbed by some a thinly veiled attack on the Tea Party and National Rifle Association, and has some critics rolling their eyes.

“Director James DeMonaco makes it clear the movie is a direct attack on the NRA, an organization filled with millions of law-abiding gun owners. The loony left’s reflexive hatred of the 2nd Amendment is founded in the concept that people who don’t break the law are somehow evil for exercising the Constitutional rights,” Dan Gainor, VP of Business and Culture at the Media Research Institute told FOX411’s Pop Tarts column. “’The Purge’ is also an obvious attack on the Tea Party and Christians.”

In an interview with Bloody Disgusting, DeMonaco said the leadership of his 2022 United States was indeed based on the NRA, although he tried to use a light touch.

"I layered in these New Founding Fathers, this regime that we voted into power at some point, some kind of NRA-thing that took over the country," he said. "But I kind of left that to the audience. I think sometimes in my writing I try to spoon feed too much, it’s better to let the audience make their own decisions on things."

He also said the film's ultraviolent "purge" was based on what he saw happening in the country now.

"When I was on my last movie, I was living in France for six months. I started noticing that the news was so very different than watching the news in America, it was just strange. And I lived in Canada right before that and it was completely different as well. Their news was just about us, because they had nothing to report," he told the website. "So when we watch the news here, I joke to my wife ‘It’s like The Purge every night.’ I don’t know what the f**k is going on out there, but it’s like the godd**n Purge!

We caught up with the movie's star at an interview junket promoting "The Purge," and Hawke said the plot is indeed social commentary.

“It’s not such a far-fetched idea that rich people are totally cut off from the adversity and murder. We sit there on a treadmill and watch and flip and see what’s happening all over the world and other countries, and a lot of that damage is created by our affluence and what is our level of participation in that,” he told us. “And how do we feel about that, and what are we going to do about it? And the rest of us just change the channel.”

“It’s the fun of science fiction in a way that it forces you to think about political ideas without ‘who are you going to vote for?’" he said. "You get to think without anyone having an agenda for gun control or not.”

"Worse than being an apparent attack on limited government and the Tea Party movement, the plot just seems really stupid, even for Hollywood,” Ziegler said. "If they are going to be so biased they should at least be good."

The L.A. Times called it an “emptying experiences” of “cheap scares and violent showdowns,” Seattle Times noted that “no real answers” were provided by the filmmaker, and that it was simply a presentation of a “bizarre dystopian future,” while Time Out New York suggested that the film “morphs into a dull version of ‘Straw Dog.’”

However, plenty of other critics have “The Purge” the thumbs up.

Film.com applauded it as a “blunt takedown of 1%-er politics masquerading as a home invasion picture,” the Birmingham Mail called it a “very clever thriller and a thought-provoking social commentary rolled into one,” and the Village Voice observed that the “set-up is arresting, the domestic scenes well observed and acted," and that the “late-film twist isn't a surprise, exactly, but it is delicious.”

Gainor, however, said the movie is just Hollywood's latest attempt at demonizing America.

“Once again Hollywood tries to make money from Americans by bashing America. The entertainment industry loves trying to depict the U.S. as the bad guy. Movies used to show the good things about our nation, now Hollywood execs clearly avoid that whenever possible,” he said. “It’s almost funny that a schlock movie filled with violence is used to criticize Americans for being violent.”