Comedian Bill Engvall opens up about his greatest personal achievement and issues a stern, yet comedic warning for middle-age men to get their prostate checked.

LOS ANGELES – Bill Engvall is returning to network television and says he wouldn't want to be anywhere other than in the same scene as his longtime pal Tim Allen.

The blue-collar comedian recently spoke with Fox News on the set of “Last Man Standing,” where he’ll make his long-awaited return as Reverend Paul, and opened up about his greatest personal achievement – his family.

"Wow, that's a great question," said Engvall before taking a moment to ponder his response. "You know what; I think it's the fact that for as many mistakes as I made as a parent, my kids grew up – I hear stories from other parents and I think, 'Wow, we dodged a bullet.'"

"You know, my kids were normal kids – they did stupid stuff like I did when I was young," he continued. "I think I'm most proud of the fact that they grew up and they're good people, you know? They take care of other people, they know what's right in the world. And I think that – that to me means you're a success. Success is not money or how many TV shows have I done. It's like, 'Can I look at my family and go "You know what, I did OK?"'' 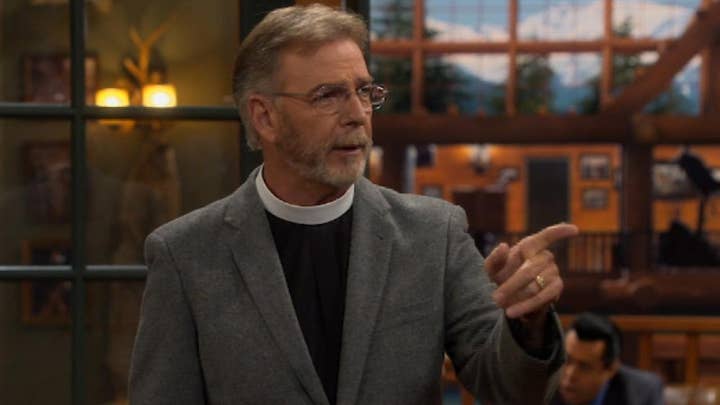 The 62-year-old also discussed his desire to be around for his grandkids and his own experience getting a colonoscopy. He also issued a stern, yet comedic plea to middle-age men to take care of themselves or else.

“It's funny how life works that as you get older – and it became more material for me, you know, getting a kidney stone which is something I wouldn't wish on the devil himself, going in for a colonoscopy – when you're young and on the road you don't think about those things,” said Engvall.

“But you gotta do it because, man you don't want to mess with that other stuff. It's two minutes and you're out, you know?"

Comedian Bill Engvall in "Last Man Standing." The funnyman will make his return as Reverend Paul in Season 8. (Photo by FOX Image Collection via Getty Images)

The funnyman explained that more than 50 percent of men in America wake up multiple times throughout the night to use the restroom, “or as I call it, 'FU,' frequent urination,” said Engvall. “And not only does it interrupt your life, but it interrupts those around you too,” he added before breaking into an impromptu comedy bit which seemed to come as second-nature.

“I have to really watch because I can't be on the middle of the stage and go, 'Hey everybody, hang on a second – I gotta go pee, you know.' And then five minutes later, I go, 'I'll be right back. Just hang tight,’” he quipped.

To help combat the effects of “FU,” Engvall is working with Urinozinc, an over-the-counter vitamin supplement that supports healthy prostate function and better urinary flow and function.

The father of two opened up about his own experience the first time he went in for a prostate check and explained the awkward moment the best way he could – in comedic form.

Chrissy Metz, left, and comedian Bill Engvall hug it out on the set of "Hollywood Game Night." (Photo by: Ron Batzdorff/NBCU Photo Bank/NBCUniversal via Getty Images)

“I remember I went in for my colonoscopy and they gave me the go-juice,” Engvall said pointing to a vein on his hand. “And man I was flying,” he joked. “They wheeled me into another room that the lights were dim and he had the Allman Brothers [song, "One Way Out"] playing and I looked at him and I said you can do whatever you want,” he said with a laugh.

The Grammy-nominated comic said he appreciated the care his doctor took in making sure he was comfortable with the procedure and noted that when “One Way Out” set the mood, he knew there was no turning back.

“But you know what, there's just something about a great relief that when you come out they go, 'Hey man everything's good. We'll see you in four years,' you know. So it's like, for two days out of your life – compared to adding 20, 30 years of your life. Get it checked.”

Engvall also talked about becoming a grandfather and said a large part of taking care of himself was so that he could be healthy enough to do things with his granddaughter.

“Think about your family, they're going to want you around,” Engvall pressed. “With me personally, with this grandbaby coming – I want to be able to take her and go running and hiking and fishing and swimming and stuff and not have to worry like, 'Oh sorry, granddaddy can't do that because I didn't take care of myself when I was young.’”

The former sitcom star continued: “It's like, if it extends my life to the point that I can watch my daughter have this baby and the grandbaby grow up and get married, you know – what's the downside there?