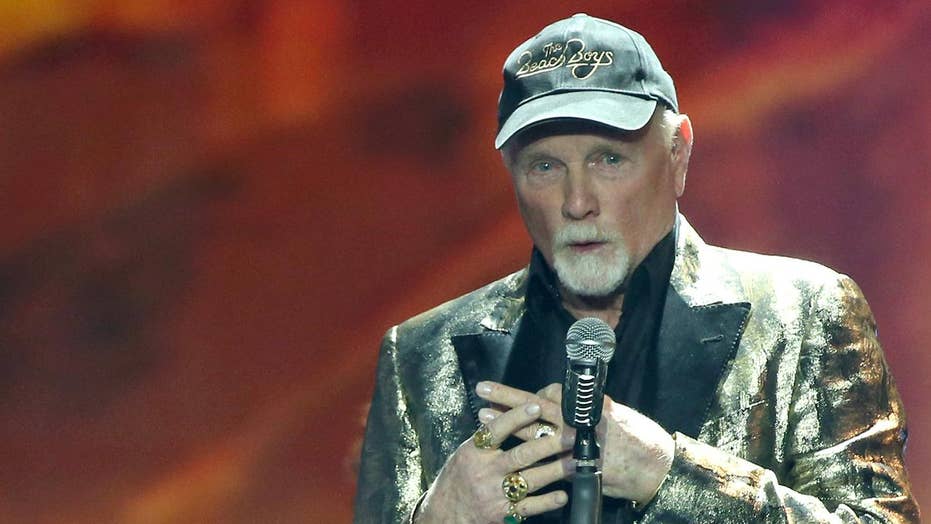 Though he’s been performing many of the same songs since the ‘60s, Love hasn’t tired of the upbeat music that made him a superstar with his cousins Brian, Carl and Dennis Wilson and pal Al Jardine. Now, Love tours with Bruce Johnston, who joined the group in 1965, and occasionally John Stamos pops up to join the band on stage “when he’s not busy.”

“It’s a never-ending tour,” Love told Fox News of his performance schedule. “If there’s a demand, you try to come up with a supply. It’s a family tradition that turned into a profession. It’s a joy to have people still love [the Beach Boys].”

Love began singing with his cousins as a hobby and the band took shape.

“At the core of it all is harmonies,” Love explained. “My cousin Brian and I got together and wrote songs about [where we were living, California].”

Those songs started to gather a following, and Love watched the group soar to superstardom.

“Early on, we were in Minnesota and we were doing a ballroom in a place in Lake Minnetonka, and we stepped out after doing a set, and we looked down the road, and there were still cars coming down the road. We could see headlights going down half a mile. It was sold out… and I said to one of my cousins ‘Wow, this must have been what it was like when Elvis Presley first started out.’”

The band’s star shined so bright in 1966 that they eclipsed the Beatles on the British charts. That’s when Love knew the band had made it big.

The band went through some rough patches, but Love chooses not to focus on those times. He detailed his experiences in his book, "Good Vibrations: My Life as a Beach Boy," which was released last year.

“It seems with every group there are some writers that focus on individuals and their issues or disagreements or drugs and alcohol – that’s impacted a lot of the groups over the years – but I think that loses sight of… the music. That’s not the main thing about any group. It’s their music.”

He reunited with Brian Wilson and Al Jardine in 2012 (both Carl and Dennis Wilson are no longer alive), but these days the only Beach Boy from back in the day Love still tours with is Johnston.

Love said of Johnston, “He took Glen Campbell’s place [in the band]. Glen was with us for several months when my cousin Brian Wilson decided he didn’t want to tour anymore. So he quit the group, and we asked Glen Campbell to fill in.”

Love said he last saw Campbell, who died Aug. 8, at the 2012 Grammys and the two got to speak briefly and reconnect.

Johnston stepped in for Campbell as the Beach Boys reached the height of their fame.

“He joined our group in 1965 and the first song that he sang was ‘California Girls’ and then we did the ‘Pet Sounds’ album and ‘Good Vibrations,’ so that was quite a year,” he said with a chuckle.

On Thursday, Love and Johnston will be performing at New York City’s Beacon Theater and Mark McGrath, of Sugar Ray, will join them on stage to perform a re-worked version of the 1968 tune “Do It Again.”

The band is known for the feel-good tunes. Love is inspired to see how fans are uplifted by the music he plays.

“I think it’s always been a ‘sonic oasis,’ a place where the music can take you away from your problems whether it’s for an hour or whatever,” he said. “I went to get my haircut… and the girl brought a ‘Pet Sounds’ album and told me it’s gotten her through all kinds of down times…

“To me, that’s the blessing of being in this group: The impact the Beach Boys have had on millions and millions people over the years.”

Love said that he is in a “great place” today. He meditates twice a day and is sure to do so before every show – and there are a lot of shows. There are Beach Boys performances scheduled through March listed on the band’s official website.

Love sees no reason to slow things down.

“I am able to go out and do songs that I was a co-author of, or else I sang a lead on, and people still enjoy it and we still enjoy doing it,” he said. “I think we just try to create a feeling with our music and our concerts that leaves people feeling better than when they came in.”