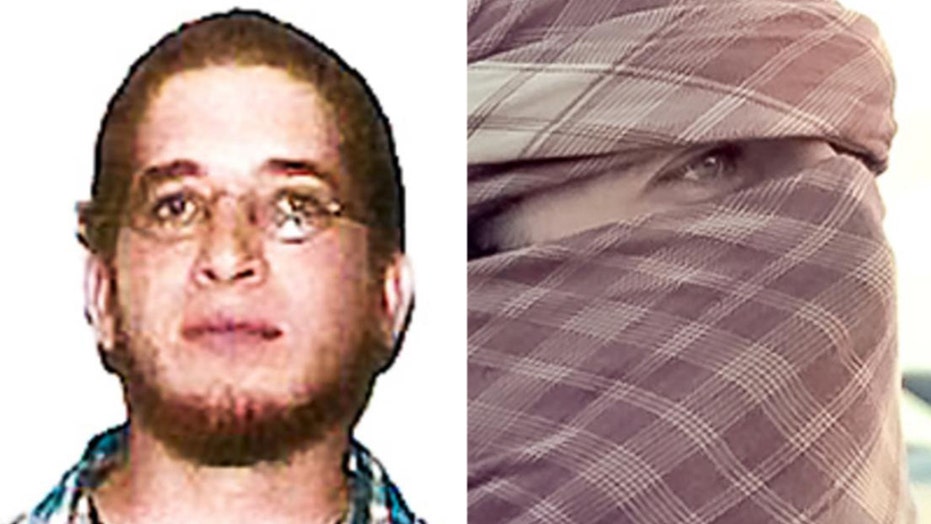 Late last year, the U.S. government upped the ante on Jehad Serwan Mostafa – a 38-year-old American citizen and former San Diego resident – branding him the most wanted American terrorist in the world.

According to a recently unsealed federal indictment, the U.S. citizen – who has for years been on the FBI’s Most Wanted Terror list – has been charged with additional crimes related to his alleged involvement with Al Qaeda affiliate Al-Shabab in East Africa.

Jehad Serwan Mostafa, 38, is considered the FBI's Most Wanted American Terrorist for his ties with the Al Qaeda-linked Al-Shabab terrorist group in East Africa. (FBI)

Mostafa was first indicted in 2010, having fled the U.S. in December 2005. The superseding indictment expands the scope of the previous charges. It claims that Mostafa, at some point between March 2008 to at least February 2017, “conspired to provide material support, including himself as personnel to terrorists.”

Now operating under “Ahmed Gurey,” “Ahmed,” “Abu Anwar al-Muhajir” and “Abu Abdullah al-Muhajir,” the FBI stated that Mostafa is a leader in Al-Shabab’ s “explosives department,” and has taken on critical roles across the media and soldier training wings. He has been implicated in improving the effectiveness of improvised explosive devices for purposes of attacking U.S. interests and soldier bases in the area, government officials have stated.

“Currently, Jehad is in Somalia, and he is very close to the decision-making circles of Al-Shabab, especially their intelligence wing called ‘AMNIYAT’ and also an explosive brigade which is controlled by the powerful Al-Shabab leader, Mahad Warsame Qaley,” an African intelligence official, who spoke strictly on the condition of anonymity, told Fox News. “Jehad is protected by Al-Shabab hardliners who are mainly connected to Al Qaeda. He directly gives advice to Al-Shabab’s leadership on issues related to strategies, international relations, smuggling explosive material and importation, media production, and its audience targeting.”

U.S Attorney Robert Brewer speaks in front of an FBI poster depicting Jehad Serwan Mostafa during a news conference Monday, Dec. 2, 2019, in San Diego. The U.S. attorney's office in San Diego says the 37-year-old U.S. citizen who is on the FBI's Most Wanted Terrorist List is facing a new indictment. (AP Photo/Gregory Bull)

Mostafa is believed to have three wives and 16 children, and his family is under the protection of Al-Shabab’s General Security, which is "in charge of overseas Counter-Intelligence and the presence of foreign fighters” in the group.

“The Middle Jubba region, which is under full control of Al-Shabab, is where intelligence agencies believe is his hideout,” the source continued. “He is one of the most trusted foreign fighters within Al-Shabab, and gets more protection (than others) from the group.”

Another security source operating in the country told Fox News that one of Mostafa’s wives married him soon after her husband, his comrade, was killed in battle. He is said to have come close to being captured around two years ago in a ground operation, but he ultimately got away unscathed. A spokesperson for the FBI handling the case declined to comment.

Nonetheless, his alleged trek into terrorism is a far cry from the baby-faced Southern California boy many viewed as sweet and subdued.

Born in Waukesha, Wisconsin, and raised in the Serra Mesa area of San Diego, Calif., Mostafa attended Mesa Community College before graduating from the University of California, San Diego in 2005 with an economics degree. Just months later, he is alleged to have absconded into the murky world of jihad at the age of 23.

Mostafa’s first stop was Yemen in 2005. In the conflict-plagued Middle Eastern country, he is believed to have struck up a relationship with several Muslims from Western countries. At some point in 2006, Mostafa ventured through several African countries, before accepting an Al-Shabab invite to Somalia.

He allegedly became affiliated with the group at a time when the terrorist group was establishing a territorial foothold in the embattled country. Soon after Mostafa disappeared into the group’s void, the leadership started issuing warnings to other foreign fighters not to come, given that sweeping arrests had started of those aspiring to overthrow the Somalian government.

A Somali woman carries wood to make a shelter in an internally displaced people camp on Dec. 18, 2018. (MOHAMED ABDIWAHAB/AFP/Getty Images)

Yet Mostafa’s path to radicalization seemingly caught many by surprise, including those who prayed alongside. He attended the local Islamic Center of San Diego in Kearny Mesa, and in 2016 the center’s director, Imam Taha Hassane, told Fox News that they had no suspicion Mostafa had become in any way extremist in his views.

“Jehad was often hanging around with the other young people. He used to play a lot of basketball outside,” Hassane recalled. “I was absolutely shocked to see his picture on the news connected to terrorism.”

His father, a Kurdish-Syrian living in San Diego – Halim Mostafa Gabori – died in 2018, apparently from a heart issue, a friend told Fox News. Halim served as one of the co-founders of The Association for Youth and Community Advancement (AYCA) and was eulogized by the organization as a “people’s person” who had a “passion for life” and a “contributing force” to the San Diego community as a whole.

In 1998, Halim founded Aveen, Inc. and, under that canopy, managed the film production company Scimitar Productions. He and his company produced the film “Mozlym” in 2008, which sought to show that “the true meaning of Islam is often lost amid misconceptions of non-Muslims in America” and centered on a young African-American who fights his way out of a ghetto and into college, “deciding to make his thesis film on Muslims and violence.”

The film went on to win some international awards. Halim also had an uncredited role as an “Iraqi Civilian Man” in the 1999 George Clooney, Mark Wahlberg and Ice Cube-starring war film “Three Kings.”

Moreover, Halim also ran Scimitar Security, a company that offers an array of services including armed and unarmed security as well mobile patrol for residential properties and location, where Jehad is also said to have worked at before joining the terrorist outfit abroad. A search of professional licenses shows Mostafa registered with the California Bureau of Security and Investigative Services as a guard in the year 2000, with validity through to August 2006.

Prior to fleeing, Mostafa was licensed as a security guard from the year 2000, with validity through to August 2006. He additionally worked behind the counter at the Winston Auto Center on El Cajon Boulevard in San Diego

His mother, Sumaiyah, is a school teacher who has worked in various states and countries, according to AYCA.

Family members, including one older brother, a 40-year-old software engineer in Southern California, did not respond to requests for comment. A family friend, who requested anonymity, told Fox News that Halim was deeply disappointed and upset over Jehad’s departure to Africa and that over time his name fell almost entirely from the conversation.

Meaning “The Youth” in Arabic, Al Shabab remains one of the most potent and deadly organizations in the world, racking up a jarring number of fatalities in recent years. It started as an insurgent faction built on a hardline Islamic interpretation in the late ’90s, and in 2012 aligned itself with Al Qaeda.

Somalia’s government blamed the group on the deaths of more than 500 people in a massive truck bombing in the capital of Mogadishu in October 2017. In 2015, the terror group masterminded a massacre at neighboring Kenya’s Garissa University, killing 148 people, and in 2013, its operatives assaulted Nairobi’s Westgate shopping mall in which 67 people died. Kenya’s foreign minister declared that some of the militants orchestrating the mall carnage were Americans, but it is unclear if Mostafa was one of them. 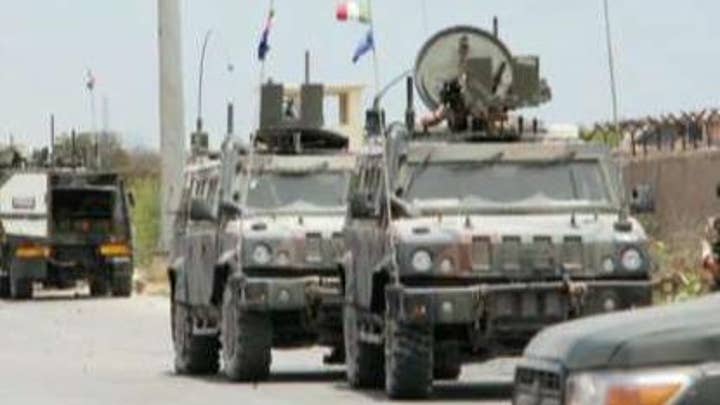 At its peak between 2009 and 2011, Al-Shabab controlled the majority of central and southern Somalia. Although it was ousted from the capital in 2011, the group has “transitioned to a more covert form of guerilla warfare,” observed London-based terrorism and security consultant Will Hartley.

“Concern that Al-Shabab was reestablishing itself prompted a renewed U.S. focus on the group in the latter years of the Obama administration, and that has continued under Trump,” he said.

During his first months in office, President Trump greenlit a Pentagon plan to ramp up operations and drone strikes against the insurgency faction, estimated to have around 9,000 members. Yet, the bloodletting on the U.S. lives still stings.

On Sunday, a U.S. soldier and two Department of Defense contractors were killed in an Al-Shabab attack at a compound used to train African service members in Kenya.

According to Fox News tabulations based on available data, Al-Shabab is responsible for the deaths of more than 1,892 people across Africa since 2008, the year it was first designated a foreign terrorist organization (FTO), and it has seriously wounded countless more.

“Al-Shabab is as brutal as they come. The group divides the areas under its control to geographical units it dubs ‘Islamic States’ and administers them according to its understanding of Islamic law,” noted researchers for the Middle East Media Research Institute’s (MEMRI) Jihad and Threat Monitor. “It regularly calls for attacks on American and Western targets worldwide, but so far has not directly carried out any such attacks.”

In addition to its dizzying array of attacks, Al-Shabab is accused of carrying out stonings, amputations and beheadings as “regular punishment for criminal and apostates,” according to the Counter Extremism Project (CEP). The U.N. has also charged that the group uses children in combat and reconnaissance roles.

The Department of State’s Rewards for Justice Program is offering a $5 million reward leading to the arrest and conviction of Jehad Serwan Mostafa. Despite the lucrative financial offering, which has been on the table since 2013, Mostafa has remained at-large. He is known to speak English, Arabic and Somali.

The last unclassified proof-of-life was in October 2011, when he appeared at a press conference with an Al-Shabab top brass, “purporting to be an al-Qaeda emissary,” the FBI documented. Throughout the event captured on camera, he praised Osama bin Laden.

“His track record amounts for a rap sheet of some big misdemeanors including serving as Al-Qaeda leader Ayman al-Zawahiri’s point man,” added Raphael Gluck, founder of the terrorist monitoring site Jihadoscope. “Essentially, he remains hidden. Unless one is a spiritual leader or figurehead, he won’t be releasing videos, and there won’t be videos focused on him. But someone like Jehad is worth a lot more than a propaganda video.”