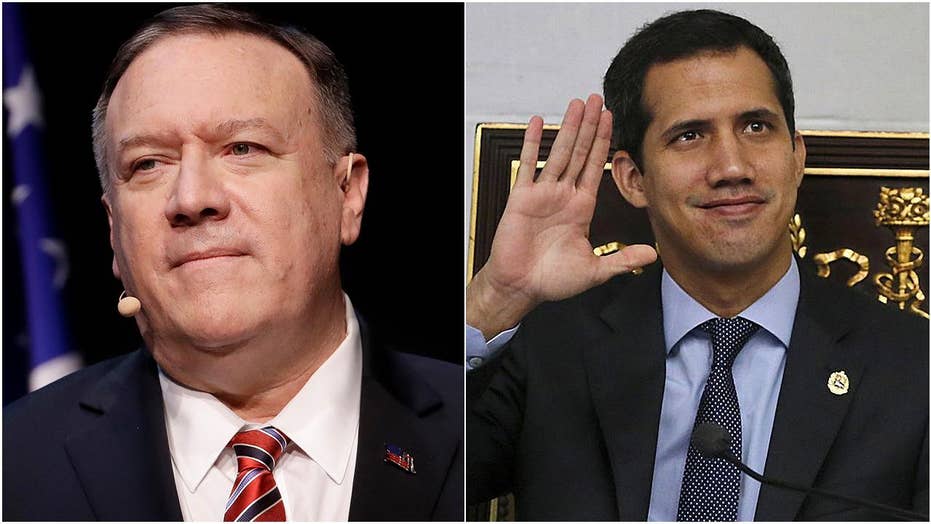 Venezuelan opposition leader Juan Guaidó is hoping to meet President Trump for the first time this weekend after he wraps up an international tour with what is anticipated to be a massive rally in Miami.

With his support down at home, Guaidó – who is recognized by the U.S. as Venezuela’s rightful president -- has launched the second year of his so-far unsuccessful campaign to remove the current sitting president, Nicolás Maduro. He has defied a travel ban by slipping out of Venezuela, seeking to shore up backing from leaders in Colombia, across Europe and Canada – and a meeting with Trump would solidify the young political leader’s standing with his most important international ally.

“If Trump does not meet with Guaidó, that would raise serious questions about the administration’s continuing commitment to Venezuela’s interim president,” Michael Shifter, president of the Washington-based Inter-American Dialogue think tank, told the Associated Press.

Guaidó's planned rally Saturday in Miami is expected to draw a large number of Venezuelans in the biggest diaspora of expatriates living in the U.S.

At various stops on his international trip, Guaidó has met with U.S. Secretary of State Mike Pompeo, U.S. Secretary of Commerce Wilbur Ross and White House adviser Ivanka Trump, but he hasn’t yet gotten to the U.S. president.

He missed Trump at the World Economic Forum in Davos, Switzerland, arriving a day after the U.S. president left. The two will both be in Florida this weekend, but it is unclear whether Guaidó is on the guest list for Trump's Super Bowl party at his Mar-a-Lago club — or invited to any other meetings.

A Trump-Guaidó meeting is under consideration and would likely take place this weekend in South Florida, two people -- including a senior U.S. official – told the Associated Press. The official and another person familiar with the discussions spoke on condition of anonymity because they weren’t authorized to discuss Trump’s plans.

Venezuela has been a top priority in Latin America for the Trump administration, which was a year ago the first among nearly 60 governments to throw their weight behind Guaidó. U.S. officials called Maduro a “dictator," and hit the state-run Venezuelan oil firm PDVSA with sanctions among other financial measures designed to push out the socialist leader.

However, Maduro remains in control, having faced down a coup attempt, a brief renewal of mass anti-government protests and U.S. sanctions.

Guaidó emerged from the opposition in January 2019 to become the first viable challenger in years to Maduro, the hand-chosen successor of the late charismatic leader Hugo Chávez. Venezuela’s economy continues to shrink after two decades of socialist rule, despite it holding the world's largest oil reserves.

But Maduro today appears emboldened. Armed civilian groups loyal to the president patrol the streets on motorcycles, blocking Guaidó and allied lawmakers from entering their legislative hall. Intelligence police occupied Guaidó’s office space after he left on his foreign tour.

“The biggest clown ever in Venezuelan or world politics declared himself as president,” Maduro said in a celebratory address on the anniversary of Guaidó claim to power. “Who the hell elected you?”

A woman holds a Venezuelan flag as others pack the Puerta del Sol square waiting for Juan Guaido during his visit to Madrid, Spain, Saturday, Jan. 25, 2020. Juan Guaido, the man who one year ago launched a bid to oust Venezuelan President Nicolas Maduro, arrived Saturday in Spain, where a thriving community of Venezuelans and a storm among Spanish political parties awaited him. Banners read 'Peace and6Freedom' (AP Photo/Paul White)

Guaidó wrote an op-ed published Thursday in the Miami Herald saying he was in the U.S. He thanked Trump, U.S. lawmakers and their counterparts in Europe and throughout the Americas for all they have done for Venezuela.

“They have helped Venezuela in our time of greatest need, and no Venezuelan will ever forget that,” he wrote. “Their commitment has been extraordinary, but on behalf of our people, I must ask for more.”