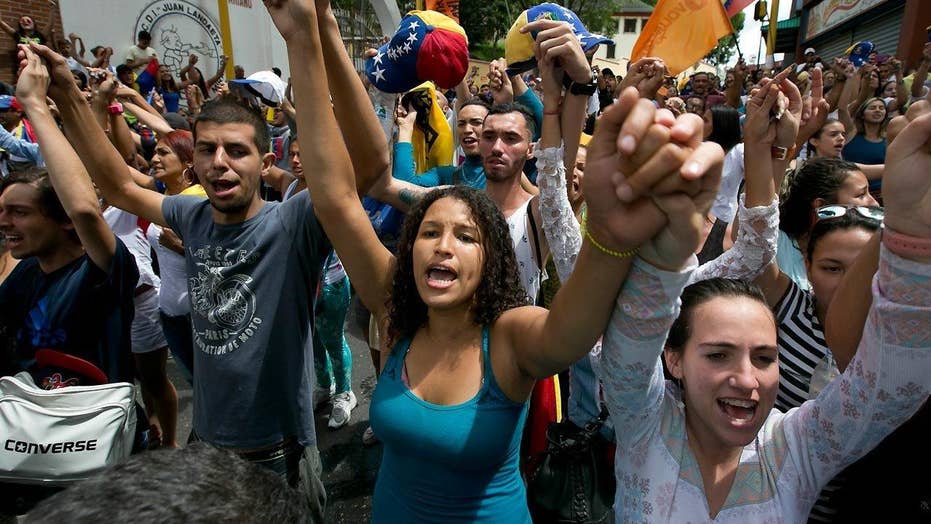 Venezuelan authorities are increasingly rounding up and even torturing innocent people in a brutal crackdown on complaints about the government and deteriorating living conditions in the beleaguered nation, according to a new report by Amnesty International released Wednesday.

The report, titled “Silenced By Force: Politically-Motivated Arbitrary Detentions in Venezuela,” said it found “serious human rights violations that Amnesty International has observed in Venezuela, some of which constitute crimes under international law.”

Warrantless arrests, a biased judicial system that acts on unproven accusations and information from anonymous sources and frequent use of solitary confinement were all listed as evidence of Venezuela’s growing disregard for due process and freedom.

“[The situation] has given rise to an abusive and arbitrary use of criminal law as a mechanism by which to detain and prosecute people who hold opinions critical of the Venezuelan government’s policies,” the report stated.

The organization released its report as tens of thousands of Venezuelans have taken to the streets in the last few weeks to protest President Nicolas Maduro, who they blame for triple-digit inflation, food shortages and rising crime.

By Tuesday, 26 people had been killed, more than 400 injured and nearly 1,300 detained in a wave of unrest generated after the Supreme Court stripped Congress of its last powers.

The decision was later reversed amid a storm of international criticism.

“In Venezuela dissent is not allowed,” said Erika Guevara Rosas, Americas Director at Amnesty International. “It appears that there is no limit to the authorities’ willingness to apply a myriad of legal tactics to punish those who express an opinion which differs from the official government position.”

Amnesty described charges brought against peaceful activists for such things as crimes “against the homeland” as well as the use of detention before a trial and attempts to besmirch the reputation of political opponents.

As one of many examples cited in the 24-page report, the group described the case of Jose Vicente Garcia, a local councilman for opposition party Voluntad Popular who was arrested last October as he left his home to attend a municipal council meeting.

His wife, Maria Alejandra Rivera de Garcia, announced on the councilman’s Twitter account that Venezuelan intelligence agents had followed him for a few days before his detention.

She accused authorities of planting grenades and military clothing in his car during his arrest.

Amnesty said that immediately after the tweet, the governor of Tachira state, where the councilman lives, posted a photo on Twitter showing Jose Vicente Garcia – apparently where he was being held -- behind a table that had uniforms and grenades.

The councilman remains in jail, though no charges have been brought against him, the Amnesty report said. Other elected officials who express disapproval of the Maduro government have been arrested and even subjected to criminal proceedings that lead to their dismissal from public office, the group said.

Marselha Goncalves Margerin, advocacy director for the Americas at Amnesty International, told Fox News arbitrary detentions have risen since President Hugo Chavez, who was elected in 1999 and established a socialist system in Venezuela, died and his hand-picked successor, Maduro, took the helm.

“Many people are protesting because they don’t have access to food and medicine, or because the oppression has increased,” Eric Farnsworth, vice president of the Council of the Americas in Washington and a former Latin America specialist in the Clinton administration, said. “They’re arrested on trumped up charges and held incommunicado. The government throws them in jail and hopes everyone else gets the message.”

It’s a long drop to a crisis level for Venezuela, which for decades was Latin America’s most stable democracy and enjoyed a robust economy, in no small part because of its oil resources.

“When Chavez was alive Venezuela benefitted from higher oil prices,” Farnsworth said. “Chavez squandered that wealth, he gave it away, spent on revolution things, meanwhile Venezuela didn’t sufficiently invest in the energy sector.”

Chavez curtailed liberties, going after journalists who did critical reports on him or his policies, shutting down news outlets, seizing control of the Supreme Court and going after human rights activists.

Maduro is ratcheting up the Chavez policies, but without the charisma or economic might of his predecessor.

“Maduro does not have the flexibility that Chavez, as the author of the revolution, had to change when things get too complicated,” Farnsworth said. “His level of support is not the same that Chavez had."