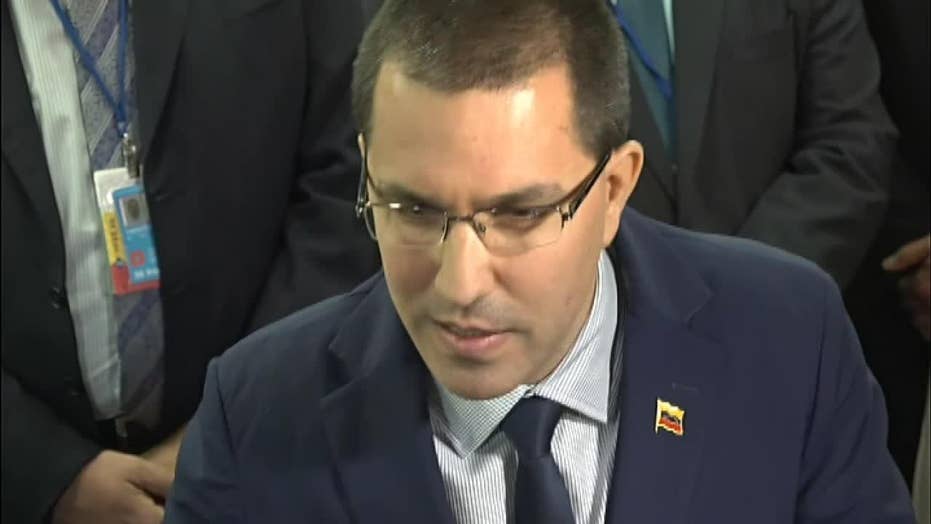 Arreaza blasted Trump Wednesday for meeting with the Venezuelan opposition’s delegation to the UN's General Assembly instead of the official government delegation, calling the meeting “shameful.”

UNITED NATIONS – Venezuelan Foreign Minister Jorge Arreaza blasted President Trump on Wednesday for meeting with the Venezuelan opposition’s delegation to the United Nations General Assembly instead of the official government delegation, calling the meeting “shameful,” saying the president “doesn’t like Latin Americans” and accusing him of “trying to distract the public opinion of his own scandals.”

Trump had called for an end to the “horrible and brutal oppression” of disputed President Nicolas Maduro during the meeting and discussed the need for a democratic transition in Venezuela by increasing pressure on Maduro and his regime.

“We will stand with the Venezuelan people every single day until they are finally freed from this horrible and brutal oppression,” Trump said. “They will be freed. It will happen.”

Representatives of The Lima Group, which includes Argentina, Brazil, Colombia, Chile and Peru, some of the more than 50 countries recognizing opposition leader Juan Guaidó as the interim president of Venezuela, also attended the meeting. 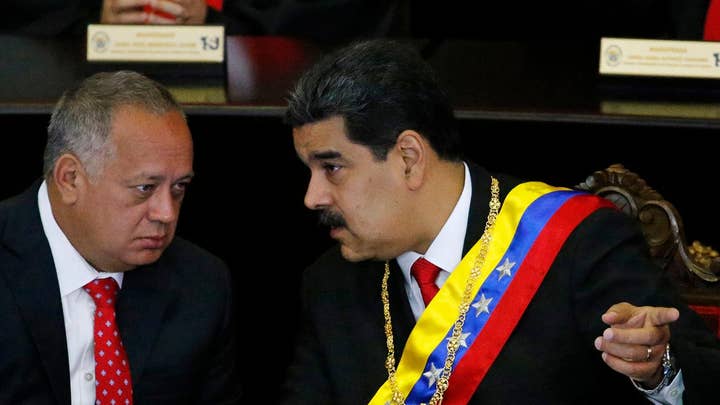 “It’s the puppeteer with the puppets telling them what to do,” Arreaza said. “And, of course, they are all really frustrated because they have tried all year long to overthrow our government... they have sanctioned, and they have imposed all these blockades against the Venezuelan people, and they haven’t reached their goals... and they won’t.”

On Monday, the Trump administration stepped up pressure on Maduro’s regime, renewing demands for tougher sanctions and more aid for refugees. 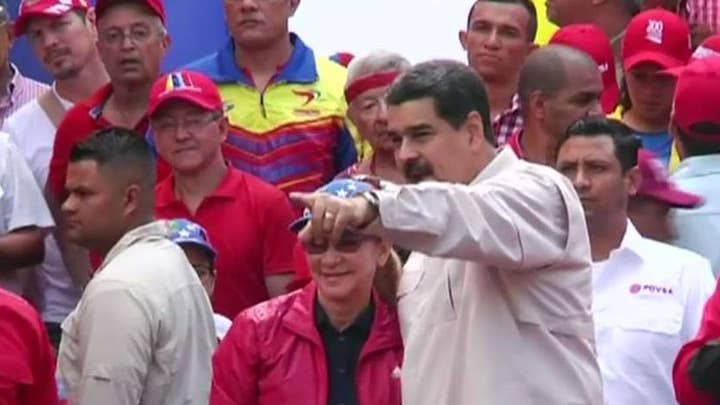 The U.S. and more than a dozen Latin American countries have agreed to investigate and arrest associates and senior officials of Maduro’s administration suspected of crimes like drug trafficking and financing terrorism, but have not appeared to support using force or military intervention to depose the controversial leader.

“President Trump is leading our allies to act against a tyrant regime that is a clear threat to the maintenance of peace and security of the region and the world,” said former senior diplomat Isaias Medina, who represented Venezuela at the U.N. in New York until 2017 when he left his post over killings of anti-government protesters. “Latin America is waking up... the Venezuelan people need an international coalition action urgently.”

Trump previously refused to rule out U.S. military intervention in Venezuela but said his goal has been to secure a peaceful transition of power to Guaidó. “We have it under control, we’re watching it very carefully,” he said earlier this week.

The White House announced this week it would more than triple support for pro-democracy work in Venezuela, a nation suffering from a humanitarian crisis after 20 years of socialist rule.

During the meeting with the opposition’s delegation, Trump cited U.N. statistics showing that since 2018, Maduro’s Cuban-trained “death squads” have killed up to 10,000 Venezuelans, “and they think that number is extremely low.”

Arreaza said his country would continue working with Cuban security and military forces despite Trump calling Maduro a “Cuban puppet” in his speech to the U.N. General Assembly on Tuesday morning.

Almost 200 leaders from around the world descended on New York for the UNGA—but Maduro and Russian President Vladimir Putin, a key ally in his country’s political crisis, were not among them, instead holding their own talks in Moscow on Wednesday—a reflection of the growing relationship between the two countries that Medina called “a direct challenge to NATO’s partners and allies.”

Arreaza seemed to extend an offer of peace talks to the U.S. — but under strict conditions.

Despite the U.N. and other nations still recognizing the Maduro government and its delegation, Arreaza called on U.N. member states to reconsider New York City as the headquarters of the international organization, saying the host country has disrespected his country.

“The representation of a delegation at the United Nations is predicated upon the fact that the delegation truly represents the people, or at least does not oppress them,” Medina said. “The General Assembly should declare that the current Venezuelan regime in power has no right to represent the people that they oppress in Venezuela.”