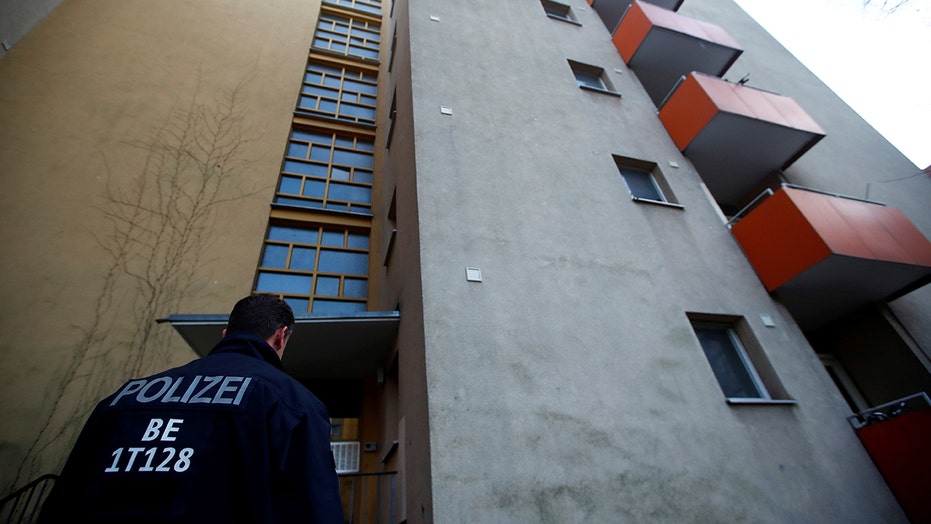 Police in Germany arrested a “radical Islamist” from Syria on Tuesday after receiving a tip from U.S. intelligence officials that the man was planning an attack.

Prosecutors said the 26-year-old man was planning an attack designed to “kill and injure a maximum number of people,” according to reports.

U.S. law enforcement had passed on a tip that the suspect had obtained information online on how to build bombs and talked in Internet chats about planning an attack, The Associated Press reported.

Germany's ARD reported the man was at the top of the federal police’s list of dangerous Islamist extremists, Reuters reported. His name was not released.

A German police officer stood outside the house of a Syrian man suspected of exchanging bomb-building material after the man's arrest Tuesday in Berlin. (REUTERS/Hannibal Hanschke)

U.S. Embassy spokesman Joseph Giordono-Scholz said he could not elaborate.

“We can’t comment on the specifics of this investigation, but we are proud of the longstanding, strong cooperation between United States and German law enforcement agencies,” he said.

According to reports, the suspect was an asylum-seeker who had been living in Germany since 2014.

Prosecutors said the suspect had begun to procure the "requisite components and chemicals for the construction of an explosive device" with the intention of killing as many people as possible, Deutsche Welle reported.

"This was intended for detonation at an unknown point in time and at an unknown location in Germany," the prosecutors added, according to the broadcaster.

According to the outlet, the suspect, who worked as a janitor at a Berlin elementary school, was being observed by prosecutors in an electronic message group affiliated with the Islamic State.