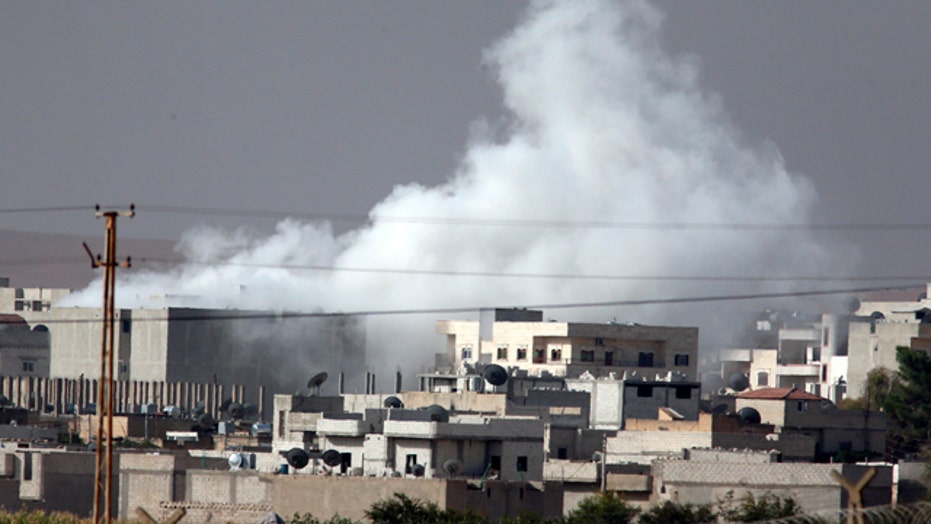 MURSITPINAR, Turkey – The new U.N. envoy to Syria said Friday that at least 500 civilians remain trapped in the Syrian Kurdish border town of Kobani besieged by the Islamic State group, warning that they were likely to be "massacred" if it falls to the extremists.

Staffan de Mistura raised the specter of some of the worst genocides of the 20th century during a news conference in Geneva, where he held up a map of the town along the Syria-Turkish border and said a U.N. analysis shows only a small portion remains open for people to enter or flee Kobani.

The dramatic warning came as the Islamic State group pushed into Kobani from the south and east, taking almost full control of the so-called "Kurdish security quarters" -- an area where Kurdish militiamen maintain security buildings and where the police station, the municipality and other local government offices are located.

The onslaught by the Islamic State group on Kobani, which began in mid-September, has forced more than 200,000 to flee across the border into Turkey. Activists say the fighting has already killed more than 500 people.

"The city is in danger," said Farhad Shami, a Kurdish activist in Kobani reached by phone from Beirut. He said the Islamic State group was bringing in more reinforcements.

U.S.-led airstrikes against the extremists appear to have failed to blunt their push on Kobani. The Britain-based Syrian Observatory for Human Rights said with the new advances toward the Kurdish security quarters in the eastern part of the town, the Islamic State group was now in control of 40 percent of Kobani.

The Observatory, which collects its information from a network of activists on the ground in Syria, said the U.S.-led coalition launched airstrikes east and south of Kobani overnight. It was not clear what they targeted.

The U.S. Central Command said in a statement on Thursday that it conducted nine airstrikes in Syria, six of them hitting south of Kobani and destroying two buildings held by the Islamic State group, a tank and a heavy machine gun, and one fighting position. Three airstrikes north of Kobani struck two small militant units and also destroyed two buildings occupied by the Islamic State group, the statement said.

On Friday, the militants shelled the town's single border crossing with Turkey in efforts to capture it and cut off Kobani, a local Kurdish official and Syrian activists said.

The official, Idriss Nassan, said Islamic State fighters aim to seize the crossing in order to close the noose around the town's Kurdish defenders and prevent anyone from entering or leaving Kobani.

By mid-morning Friday, occasional gunfire and explosions that appeared to be rocket-propelled grenades and mortar shells could be heard from across the border in Turkey, and plumes of smoke were seen rising in the distance. The Observatory said the militants shelled several areas in Kobani, including the border crossing, which is the town's only gateway to Turkey.

"Daesh is doing all it can to take the border crossing point through the farmlands east of the city," Nassan said, using an Arabic acronym to refer to the Islamic State group. "They think there might be help (for the Kurdish militia) coming through the crossing so they want to control the border."

In Geneva, de Mistura said that a U.N. analysis of the situation on the ground shows that only a small portion of the town remains open for people to enter or flee Kobani. He said there were about 500 to 700 elderly people and other civilians still trapped there while 10,000 to 13,000 remain stuck in an area nearby, close to the border.

De Mistura invoked the genocides in Rwanda in 1994 and in the Bosnian town of Srebrenica in July 1995 as he appealed to the world to prevent another catastrophe.

If the town falls to the Islamic State fighters, "we know what they are capable of doing," said the Italian-Swedish diplomat, who was appointed to the U.N. post in July.

The civilians of Kobani "will be most likely massacred," de Mistura said. "When there is an imminent threat to civilians, we cannot, we should not be silent."

"You remember Srebrenica? We do. We never forgot. And probably we never forgave ourselves for that," he said. In both Rwanda and Srebrenica, the U.N. had troops on the ground but they failed to save the lives of the civilians they were mandated to protect.

In Syria, there are no U.N. troops. Turkey has deployed troops and tanks across the border but despite U.S. pressure on Turkey to get more involved in the battle against the extremists, Turkish officials have said they will not join the fight unless the U.S.-led coalition also goes after the government of Syrian President Bashar Assad.

De Mistura appealed to Turkish authorities to allow volunteers and equipment to flow into Kobani and help its Syrian Kurdish defenders.

Without more such help, he added, Kobani is "likely to fall."