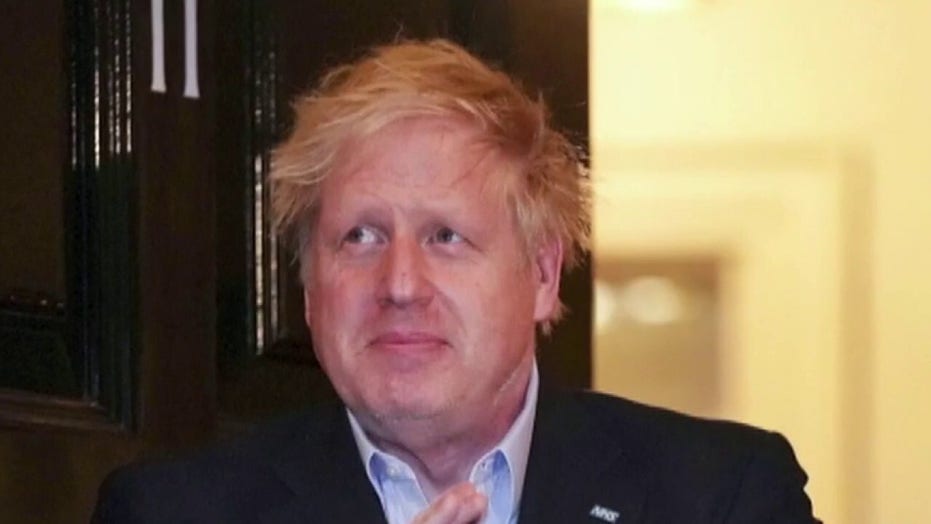 U.K. Prime Minister Boris Johnson will continue to recover from coronavirus at his home and is not returning to work yet.

U.K. Prime Minister Boris Johnson was released Sunday from a London hospital where he has battled coronavirus for nearly a week, according to officials.

Downing Street said the British prime minister will not immediately return to work and will instead recuperate at Chequers, his official country retreat in Buckinghamshire.

Johnson, 55, was admitted to St. Thomas’ Hospital in London last Sunday because of worsening COVID-19 symptoms and on Monday moved into intensive care. Downing Street said throughout his time in the hospital that Johnson was “in good spirits,” and assured the public that he was conscious and not on a ventilator -- although he was receiving oxygen assistance.

BORIS JOHNSON OUT OF ICU AMID CORONAVIRUS BATTLE, IN 'GOOD SPIRITS,' SPOKESMAN SAYS

On Sunday, Johnson said in his first public statement since he was moved out of intensive care Thursday that he owes his life to the National Health Service staff who treated him for COVID-19.

“I can’t thank them enough," Johnson said. "I owe them my life.”

In a video message released after he left the hospital, Johnson said it was "hard to find words to express my debt" while thanking everyone in the U.K. for the "effort and sacrifice" being made.

"I thank you because so many millions and millions of people across this country have been doing the right thing, millions going through the hardship of self-isolation faithfully, patiently, and with thought and care for others as well as themselves," the British prime minister said.

Johnson's pregnant fiancee, Carrie Symonds, also expressed thanks for the "magnificent" NHS and staff at the hospital. She was also sickened with the virus.

"There were times last week that were very dark indeed. My heart goes out to all those in similar situations, worried sick about their loved ones," she said on Twitter.

"Thank you also to everyone who sent such kind messages of support. Today I’m feeling incredibly lucky," Symonds added.

The British prime minister was diagnosed over two weeks ago, becoming the first world leader confirmed to have the illness. His coronavirus symptoms at first were said to have been mild, including a cough and a fever, and he was working from home during the first few days before he was hospitalized.

A drawing of a rainbow with the words "we are in this together" is displayed in one of the windows of 10 Downing Street in London, Thursday, April 9, 2020. (AP Photo/Kirsty Wigglesworth)

Johnson's move had raised questions and concerns about how the British government would run, especially considering that the line of succession is not explicitly set out in the unwritten British Constitution.

Foreign Secretary Dominic Raab had been deputized "where necessary" in Johnson’s absence and was conducting daily cabinet meetings as well as daily government briefings to the public in Johnson's place.

Britain has been in an effective lockdown since March 23 and the government is set to extend the restrictions sometime next week.

Three police officers at left and a security guard at right guard an entrance outside St Thomas' Hospital in London, where British Prime Minister Boris Johnson was being treated for coronavirus. (AP Photo/Matt Dunham)

Figures later Sunday are expected to show that over 10,000 people in the U.K. have died after testing positive for coronavirus. On Saturday, Britain reported 917 new coronavirus-related deaths.

That would make Britain the fourth European country after Italy, Spain and France to reach that grim milestone, even with its limited testing.

With Britain's death toll increasing at such a rapid daily pace, and the virus death tolls in Italy and Spain on a downward slope, there are growing fears that the U.K. will end up being the country with the most virus deaths in Europe.

The continent has had almost 74,000 reported coronavirus deaths, according to Johns Hopkins University.

Britain's business secretary, Alok Sharma, refused to be drawn in on whether the U.K. will end up with the highest death toll in Europe.

“We are at different trajectories,” he told the BBC. “We are starting to see these measures work.”