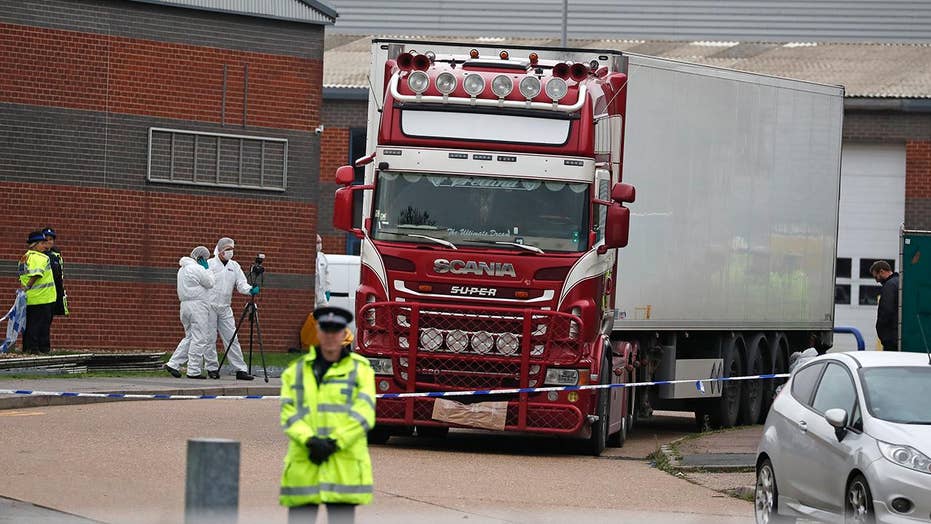 New details about the gruesome discovery of 39 bodies inside the back of a semi-truck in England have begun to emerge as police try to piece together what led up to the tragedy.

The 25-year-old driver from Northern Ireland has been arrested on suspicion of murder. While Essex police have not identified him, several U.K. media outlets have named him as Mo Robinson, from Portadown, County Armagh.

A Facebook profile with a similar name identifies him as a lorry driver and includes pictures of him in a truck’s cab or next to hauling vehicles.

Police forensic officers attend the scene after a truck was found to contain a large number of dead bodies, in Thurrock, South England, Wednesday Oct. 23, 2019. Police in southeastern England said that 39 people were found dead Wednesday inside a truck container believed to have come from Bulgaria. (AP Photo/Alastair Grant)

Essex police corrected their earlier theories about how the truck entered the U.K., saying it traveled from Bulgaria to England, not from Ireland as they thought earlier.

The rear white truck container – which was registered in Bulgaria – went from Zeebrugge in Belgium to Purfleet in England via ferry around 12:30 a.m. Wednesday morning, police said. It docked in the Thurrock area shortly after and left the port shortly after 1:05 a.m.

Police said the red tractor unit of the lorry – the smaller section at the front of the vehicle – is believed to have originated in Northern Ireland.

Earlier authorities had said the truck went from Ireland to Wales.

Police said 38 of the victims were adults, while one appeared to be a teenager. No further details were given.

"This is a tragic incident where a large number of people have lost their lives. Our inquiries are ongoing to establish what has happened," Essex Police Chief Superintendent Andrew Mariner told reporters at a press conference. "We are in the process of identifying the victims; however, I anticipate that this could be a lengthy process."

The Bulgarian Foreign Ministry confirmed the Swedish-made Scania truck is registered in Bulgaria’s Black Sea port city of Varna to a company owned by a woman from Ireland.

Police forensic officers attend the scene after a truck was found to contain a large number of dead bodies, in Thurrock, South England, Wednesday Oct. 23, 2019. Police in southeastern England said that 39 people were found dead Wednesday inside a truck container believed to have come from Bulgaria. (AP Photo/Alastair Grant)

CCTV footage acquired by Sky News shows the vehicle being driven toward the industrial park just minutes before the bodies were found inside.

“We thank everyone in the area, especially residents and local businesses, for their patience and compassion throughout the day,” police said in a statement. “This will be a lengthy and complex investigation and we continue to work with local partners and international authorities to gather vital intelligence and identify those who have sadly died.”

Police have not formally tied the deaths to human trafficking, but a link was assumed because of the way the victims were crammed into the truck’s container.

Police said the truck’s cab and container are still at the scene and will be moved to a secure location at Tilbury Docks in Essex, so the bodies “can be recovered while preserving the dignity of the victims,” Sky News reported.

Richard Burnett, chief executive of the Road Haulage Association, told the BBC the truck's container appeared to be a refrigerated unit, where temperatures could be as low as -13 degrees Fahrenheit.

British Prime Minister Boris Johnson pledged in a tweet to work closely with Essex Police to establish exactly what happened and later told Parliament that people smugglers would be pursued and prosecuted to the fullest extent of the law.

"All such traders in human beings should be hunted down and brought to justice," he said.

Separately, nine migrants were found alive in a truck in Kent hours later, according to Sky News.

The tragedy recalls the death of 58 migrants in 2000 in a truck in Dover, England, and the deaths in 2015 of 71 migrants from Syria, Iraq, and Afghanistan who were found suffocated in the back of a refrigerated truck that was abandoned on an Austrian highway close to the Hungarian border.