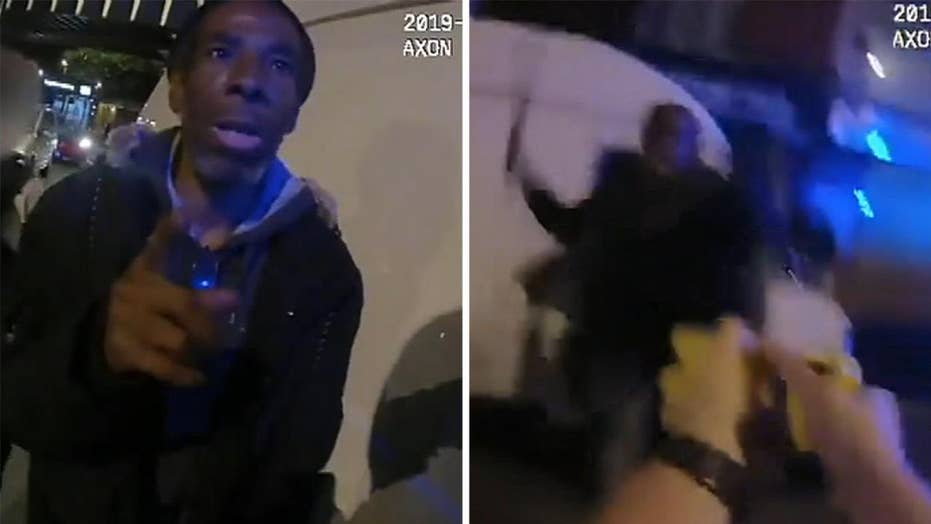 Raw video: Met police incapacitates 56-year-old suspect with a Taser after the man attacked the officer with a machete following a routine traffic stop in London.

Police in England released the graphic bodycam footage of a van driver’s machete attack on an officer during a routine traffic stop last year.

Muhammad Rodwan, 56, claimed he was acting in self-defense when he repeatedly slashed 29-year-old PC Stuart Outten with the 19-inch blade just after midnight on Aug. 8, the Metropolitan Police said in a news release. Police described the attack as "savage."

The video was released Thursday after Rodwan was convicted.

Outten, who had been on the police force for just over a decade, suffered multiple injuries, including lacerations and fractures to his head and hands, and was rushed to a hospital. He discharged his Taser in time to prevent fatal injuries, police said.

Outten is pictured left after discharging his Taser and stopping Rodwan's assault. He is pictured right following surgery for his multiple injuries. (Metropolitan Police)

“What happened that day will always stay with me, I’ll always have that memory of how a plain and simple job can escalate into you having to fight for your life,” Outten said.

Outten had pulled over the white van after a license plate check showed the vehicle did not have insurance. Rodwan was uncooperative, shouting at Outten and his partner, PC Helen Brooks, before driving off. The officers pulled Rodwan over a second time and he exited the vehicle.

But Rodwan grew more agitated, police said, and punched Outten twice in the face when the officer grabbed his arm to stop him from getting in the van a second time.

During the struggle, Rodwan grabbed a machete from the van and began to hack at Outten. He struck the officer multiple times, leaving six deep gashes in his head, wounding his right arm and breaking several fingers before the officer deployed his Taser.

Outten said he has been frustrated that the injuries have kept him out of work for five months and he’s “itching” to return.

Rodwan was found guilty of grievous bodily harm with intent.

The jury cleared Rodwan, who has previous convictions for rape and two other machete attacks, of attempted murder and possession of an offensive weapon, the BBC reported.

He will be sentenced on Friday.