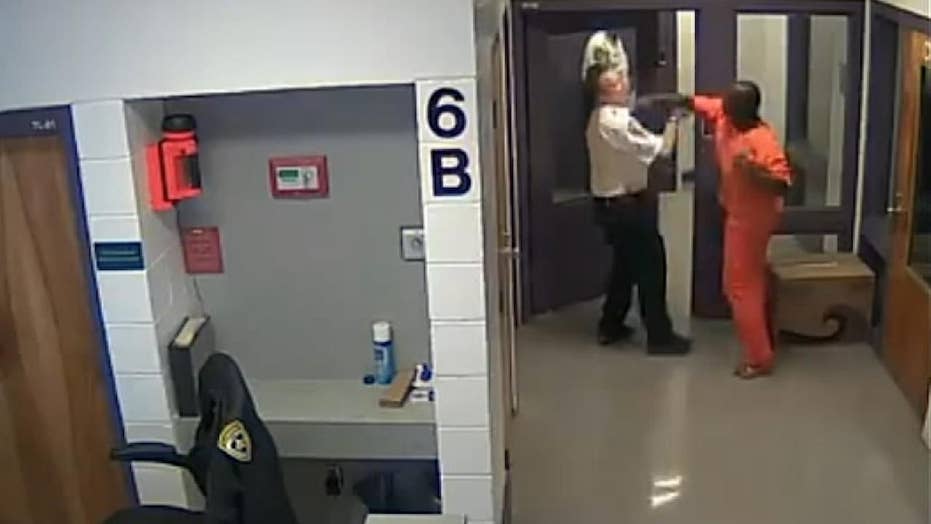 A Florida inmate whose brutal assault on a deputy inside a jail on Tuesday was caught on camera will face further charges, and a sheriff vowed the "violent" man would be "prosecuted to the fullest extent."

Michler Gabriel, 38, was being escorted by a detention deputy at the Orient Road Jail in Tampa at around 11:15 a.m. when he refused to back away from a jail pod door as it was being opened, the Hillsborough County Sheriff’s Office said.

FLORIDA MAN ATTEMPTS TO HIDE UNDERWATER FROM COPS, GETS ARRESTED AFTER COMING UP FOR AIR, POLICE SAY

The video, released by the sheriff’s office on Wednesday, shows the deputy trying to get Gabriel to step back from the door. As he points to where Gabriel should stand, the inmate punches the deputy in the face multiple times, knocking the deputy against a wall.

A second deputy is seen bolting through the door and helping the first deputy restrain Gabriel. Several other deputies arrived at the scene as Gabriel was restrained and taken away.

Sheriff Chad Chronister highlighted the incident as one of the many everyday dangers deputies face to protect the public.

"This is a prime example of the dangerous environment deputies willingly go into every day in order to keep violent people like Michler Gabriel off of our streets," he said in a statement.

"I will not tolerate anyone who would have such a lack of respect for another human being, especially for someone who selflessly serves the citizens of Hillsborough County,” Chronister continued. “While I am thankful that the deputy involved was not seriously hurt, we will make sure that Gabriel is prosecuted to the fullest extent for his actions."

Gabriel was already being held in jail on charges of driving with a suspended license, possession of a controlled substance, armed trafficking and felon in possession of a firearm.

He now faces additional felony charges of battery on a law enforcement officer and battery by a detained person.