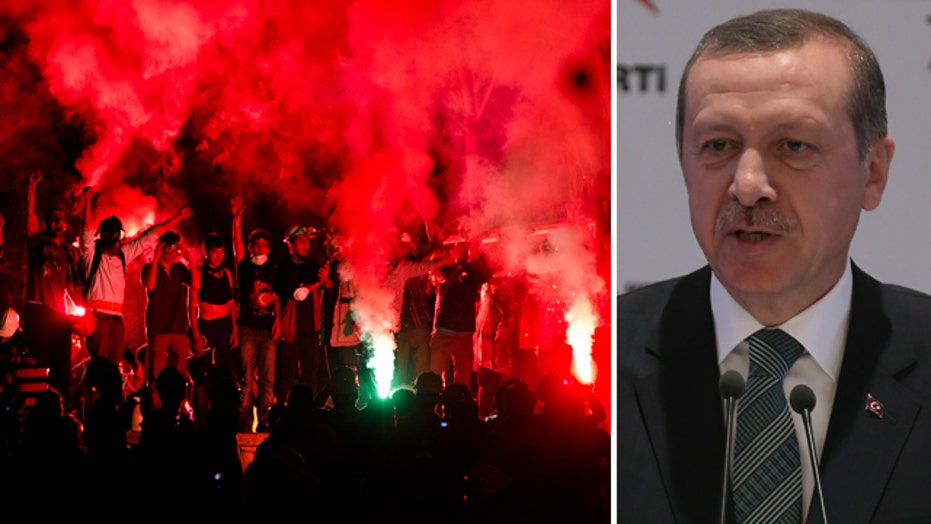 Turkey's state-run news agency says its prime minister will meet with a group that has spearheaded protests in Istanbul's Gezi Park, hours after he gave demonstrators a "final warning" to clear the area.

Prime Minister Recep Tayyip Erdogan will meet with eight artists and two representatives from Taksim Solidarity, a group that has coordinating much of the Gezi sit-in, the Anadolu news agency said.

The meeting later Thursday will be the first time that Erdogan has met with a group directly involved in the occupation.

Despite Erdogan's ultimatum, thousands of activists camping out in Gezi Park dug in for a potential culmination of their two-week standoff with authorities. Gezi Park's sit-in started small, with mainly environmental activists trying to prevent a development project that would cut down its trees to put up replica of an Ottoman barracks.

Then police cracked down on the protesters May 31, spawning wide outrage. Each day saw more tents pitched on the park's grassy verges, more banners erected, more donations of food and blankets for the protesters.

By mid-week last week, Gezi Park was a burgeoning tent city, complete with morning yoga lessons, a library, a food distribution center, an infirmary, a children's activity center and a plant nursery.

German pianist Davide Martello also has set up his custom-built piano in neighboring Taksim Square, leading the protesters in marching songs, rock anthems and other Turkish music, according to the Wall Street Journal.

The demonstrations then spread to dozens of cities, rallying tens of thousands of people each night, and shifted into a broader protest against Erdogan's rule.

Police have repeatedly fired water cannons, tear gas and rubber bullets to disperse the protesters. Five people, including a police officer, have died in the clashes and over 5,000 protesters and 600 police have been reported injured.

Protesters have objected to what they say is the prime minister's increasingly authoritarian style and his perceived attempts to impose his religious and conservative views on a country with secular laws -- charges that he rejects.

On Thursday, sticking to his trademark defiant tone, Erdogan dismissed the European Parliament's condemnation over the excessive use of force by Turkish riot police against demonstrators.

The comments showed that Erdogan appears determined to end the widespread protests that have trained an unflattering spotlight on his Islamic-rooted government.

"We have arrived at the end of our patience," Erdogan told local party leaders in Ankara, the capital.

"I am giving you my final warning," he said, directing his comments toward the protesters. He even urged parents with children at the park to convince them to pack up and go home.

Just when a possible final police raid on the park would take place was a topic of wide speculation Thursday.

Erdogan offered no timetable for it and the Interior Ministry declined immediate comment on the subject. The governor of Istanbul insisted no police raid was yet planned, although he didn't rule one out and said the public would be informed ahead of time if one was imminent.

But Hulya Avsar, a prominent actress who met Thursday with Erdogan, said he wanted to end the standoff soon.

"'In case they don't withdraw in 24 hours, there will be some sort of intervention,"' she quoted the prime minister as saying. "At that point, I said, `I will leave' -- because there was nothing to talk about."

Inside the park, many scoffed at the prime minister's tactics and language, insisting that Erdogan was turning a deaf ear to the roughly half of Turks who didn't vote for him when he was re-elected in 2011.

"Each of us is already an independent individual, may be also a father or a mother. My Mom and Dad do not think that there is an objection for being here," said demonstrator Hasan Husein Karabulut.

In some ways, it's surprising that Gezi Park became the symbol of Turkey's anti-government protests. Although it is in Istanbul's touristy Taksim Square area, it had become a rather seedy place, frequented mostly by homeless men looking for a bench to sleep on.

But it was one of the city's few green spaces, its towering trees providing rare greenery in an increasingly sprawling metropolis.

Erdogan has also lashed out at the European Parliament over its non-binding resolution Thursday. In a show-of-hands vote suggestive of a broad majority, the EU Parliament expressed its concern over "the disproportionate and excessive use of force" by Turkish police.

The EU assembly said it "deplores the reactions of the Turkish Government and of Prime Minister Erdogan" -- and accused him of driving both sides further apart.

"I won't recognize the decision that the European Union Parliament is going to take about us!" he declared. "Who do you think you are by taking such a decision?"

There have been some attempts to pacify the protesters.  Istanbul Governor Huseyin Avni Mutlu went on a nationally televised talk show Thursday and offered to meet with the demonstrators.  A day earlier, Erdogan's Justice and Development party proposed holding a referendum on the Gezi Park development plan.

But more often than not, the most visible government reaction has been from riot police. On Tuesday, they drove back protesters from Taksim Square by firing tear gas and water cannon, ripping down their banners and barricades, and clearing the way for automobile traffic to return.