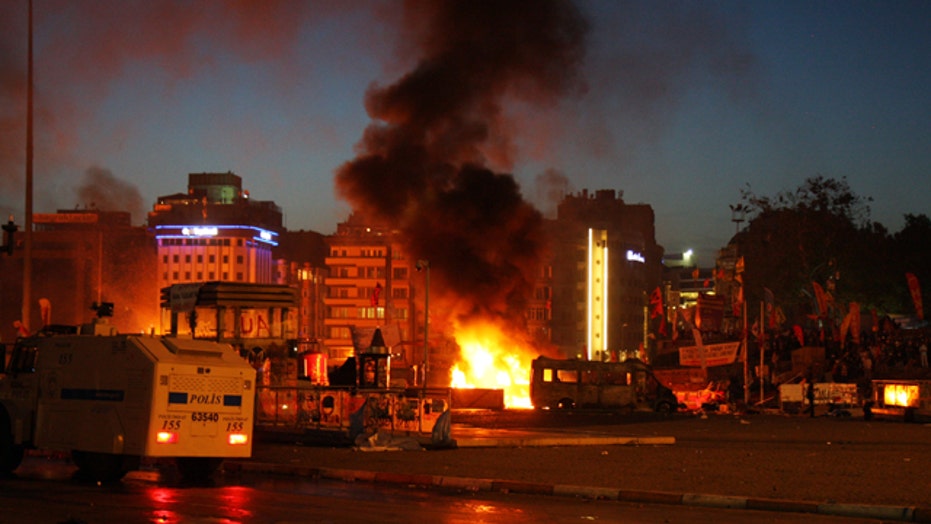 Turkey's ruling party says it is open to holding a referendum on an Istanbul park redevelopment plan that has been the catalyst of ongoing anti-government protests that have rocked the country for nearly two weeks.

The announcement, from Justice and Development party spokesman Huseyin Celik, came after Turkey's prime minister met with public figures in hopes of diffusing the protests.

Celik also said those in Istanbul's Gezi Park must immediately leave, Reuters reports. Gezi Park, with its thousands of camped-out demonstrators young and old, has become the symbol of the protests.

The protests erupted on May 31 after a violent police crackdown on a peaceful sit-in by activists objecting to a project replacing Gezi Park with a replica Ottoman-era barracks. The unrest has spread to 78 cities across the country, with protesters championing their objections to what they say is the prime minister's increasingly authoritarian style.

President Abdullah Gul, seen by many as a more moderate voice, said Turkey's government will not tolerate more of the unrest that has disrupted daily life, but authorities would listen to protesters' grievances.

"I am hopeful that we will surmount this through democratic maturity," Gul told reporters. "If they have objections, we need to hear them, enter into a dialogue. It is our duty to lend them an ear."

It was unclear exactly who took part in the meeting, which was scheduled for 4 p.m. local time at Prime Minister Recep Tayyip Erdogan's office in Turkey's capital, Ankara. Critics in the streets said the 11-person delegation wasn't representative of the protesters — and insisted it wouldn't end the showdown. Only an actor and a singer were confirmed to be among those in the delegation, the Associated Press reports.

Some leaders of civil society groups, including Greenpeace, had previously said they would not participate in the meeting because of an "environment of violence."

The activist group Taksim Solidarity, which includes academics and architects who oppose the redevelopment plan at Gezi Park, said its members hadn't been invited to the meeting with Erdogan and predicted it would yield no results.

"As police violence continues mercilessly ... these meetings will in no way lead to a solution," the group said in a statement.

Gul lashed out at foreign media, as international investors have been concerned about how the disturbances could affect Turkey's fast-growing economy. There has been a double-digit percentage drop in the main stock index since the beginning of the protests.

Traffic returned to Istanbul's Taksim Square early Wednesday after a night of violence, with taxis, trucks and pedestrians returning to the streets. A heavy police presence stood off to the side, near a new barricade erected before dawn to prevent riot police from firing tear gas into the square's still occupied Gezi Park.

Hundreds of protesters remained in the park, clearing up after trying to fend off tear gas, followed by an early morning storm that blew down tents and soaked bedding and blankets. At the park's entrance on Taksim Square, a massive barricade of wrecked cars and construction material stood as rudimentary protection from the police.

Lawyers also joined in on the protests Wednesday, as thousands in black robes are stormed out of their courthouses in Turkey, shouting, clapping and chanting about the rough treatment police dished out to their colleagues.

Sema Aksoy, the deputy head of the Ankara lawyer's association, said lawyers have been handcuffed and dragged on the ground. She called the police action an affront to Turkey's judicial system.

"Lawyers can't be dragged on the ground!" the demonstrating lawyers shouted in rhythm as they marched out of an Istanbul courthouse. Riot police stood off to the side, shields at the ready.

The protests -- which have become Turkey's most severe anti-government demonstrations in years -- has left Erdogan looking vulnerable for the first time in his decade in power and has threatened to tarnish the international image of Turkey, a Muslim majority country with a strongly secular tradition, a burgeoning economy and close ties with the United States.

Throughout the protests, Erdogan has maintained a defiant tone, insisting he would not be bowed by what he described as a vocal minority. On Tuesday, as police clashed with protesters in Taksim, he insisted again that the unrest was part of a conspiracy against his government.

The demonstrators, he said, "are being used by some financial institutions, the interest rate lobby and media groups to (harm) Turkey's economy and (scare away) investments."

Four people have been killed in the demonstrations, including a police officer, and about 5,000 have been treated for injuries or the effects of tear gas, according to the Turkish Human Rights Foundation.

The Turkish Human Rights Foundation said the Istanbul Public Prosecutor's office had launched an investigation into allegations of excessive use of police force during the protests.

The foundation said 620 people, including a year-old child, were injured during the police crackdown early Wednesday. Police detained some 70 people.

On Tuesday, riot police firing water cannons and tear gas clashed all day and night with pockets of protesters throwing stones and setting off fireworks. The pitched battles didn't simmer down until just before dawn.

In Ankara, police fired water cannons and tear gas Tuesday to disperse several hundred protesters -- some throwing stones -- who gathered in sympathy with their Istanbul counterparts. In the early hours of Wednesday, police moved in to Kugulu Park, where protesters had  been camping. They made dozens of protesters pack up their tents, and arguments broke out with those unwilling to move.

Confident of his position of power after winning the last elections in 2011 with 50 percent of the vote, Erdogan has insisted he will prevail. He made it clear that he has come to the end of his patience with the protesters, whom he accused of sullying Turkey's image abroad and being vandals and troublemakers.

"To those who ... are at Taksim and elsewhere taking part in the demonstrations with sincere feelings: I call on you to leave those places and to end these incidents and I send you my love. But for those who want to continue with the incidents I say: `It's over.' As of now we have no tolerance for them."

"Not only will we end the actions, we will be at the necks of the provocateurs and terrorists, and no one will get away with it," he added.

"We continue to follow events in Turkey with concern, and our interest remains supporting freedom of expression and assembly, including the right to peaceful protest.  We are concerned by any attempts to punish individuals for exercising their right to free speech, as well as attempts by any party to provoke violence."