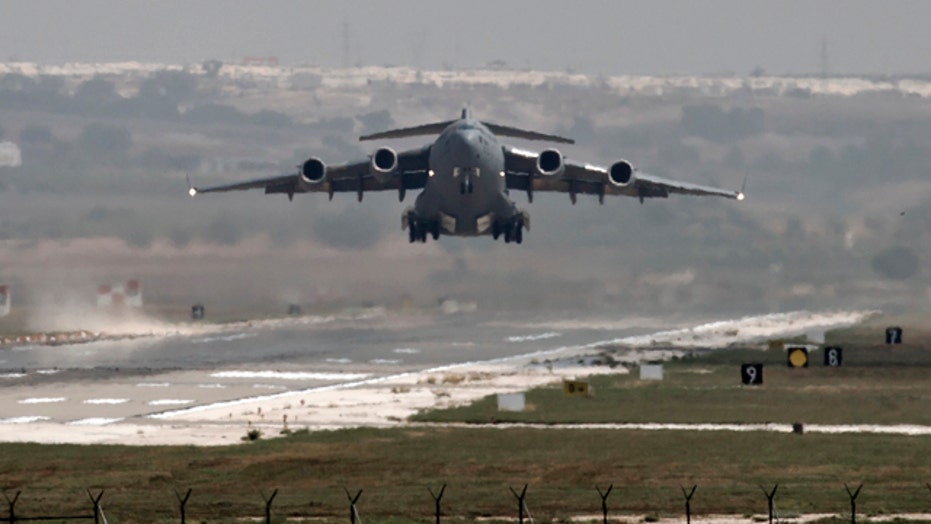 Turkey strikes ISIS, agrees to let US use airbase

Turkey's government took a stand against Islamic extremists Friday, sending  its warplanes to pound ISIS targets across the border in Syria, and detaining nearly 300 suspected militants across the country.

A government statement said three Turkish F-16 jets took off from Diyarbakir airbase in southeast Turkey early on Friday and used smart bombs to hit three ISIS targets. A government official, who spoke on condition of anonymity because of government rules requiring authorization for comment, told the Associated Press the targets were two command centers and a gathering point of ISIS supporters.

The official statement said the decision for the operation was made at a security meeting held on Thursday after ISIS militants fired from Syrian territory at a Turkish military outpost, killing a soldier.

Prime Minister Ahmet Davutoglu said the airstrikes Friday had "removed potential threats" to Turkey, hitting their targets with "100 percent accuracy." He did not rule out further airstrikes, saying Turkey was determined to stave off all terror threats against it.

Turkish media said Friday’s targets were the Syrian village of Havar, near the border, but officials would not confirm the location. The private Dogan news agency said as many as 35 ISIS militants were killed in the airstrike that targeted the gathering point. The agency did not cite a source for the report and there was no official confirmation.

Rami Abdurrahman, who heads the Britain-based Syrian Observatory for Human Rights, said several ISIS fighters were killed in the airstrikes but much less than the 35 reported by Turkish media.

"(ISIS) is imposing a blackout on its losses, although there aren't large losses," Abdurrahman told The Associated Press by telephone.

Abdurrahman told Reuters the goal of the strikes could also be "to help rebels on the ground control areas near the border instead of Kurdish forces."

The bombing is a strong tactical shift for Turkey-- which spans the intersection of Europe and Asia and borders the Middle East—after a long reluctance to join the U.S.-led coalition against ISIS.

"We can't say this is the beginning of a military campaign, but certainly the policy will be more involved, active and more engaged," a Turkish government official told Reuters Friday. "But action won't likely be taken unprompted."

President Recep Tayyip Erdogan confirmed that Turkey had agreed to let the U.S. use a key base in southern Turkey for military operations against the militants "within a certain framework." He did not elaborate on the agreement, which a U.S. official said was reached during a phone call this week with President Obama.

Citing operational security, the White House declined to confirm the agreement, but noted that President Barack Obama and Turkish President Recep Tayyip Erdogan had agreed to "deepen our cooperation" against ISIS in their phone call Wednesday.

The agreement follows months of U.S. appeals to Turkey and delicate negotiations over the use of Incirlik and other bases by the U.S.-led coalition -- a sensitive topic in Turkey.

American officials said access to the base in southern Turkey would allow the U.S. to move more swiftly and nimbly to attack ISIS targets.

Davutoglu said Turkish planes did not violate Syrian airspace on Friday, but he did not rule out incursions in the future. He denied news reports claiming that Turkey had told the Syrian regime about the airstrikes, but said it had contacted NATO allies before the operation.

"This was not a point operation, this is a process," Davutoglu said. "It is not limited to one day or to one region ... the slightest movement threatening Turkey will be retaliated against in the strongest way possible."

On Friday, Turkish police launched a major operation against terror groups including ISIS, carrying out simultaneous raids in Istanbul and 12 provinces and detaining more than 290 people, a government statement said. The state-run Anadolu Agency said helicopters and as many as 5,000 special forces were involved in the operation which was also targeting the PKK Kurdish rebel group and the outlawed far-left group, DHKP-C.

The agency said 98 people were detained in Istanbul -- 36 of them foreign nationals. It did not give details on their home countries.

One DHKP-C suspect, a woman, was killed in a gunfight with police in Istanbul, Anadolu reported.

Turkey's moves came as the country finds itself drawn further into the conflict by a series of deadly attacks and signs of increased ISIS activity inside the country.

Earlier in the week, a suicide bombing blamed on ISIS militants killed 32 people in Suruc, near the Syrian border.

Turkish officials have raised concerns that the bombing was part of a campaign of retaliation for Turkey's recent crackdown on ISIS operations in the country. In the last six months, Turkish officials say, more than 500 people suspected of working with ISIS have been detained.