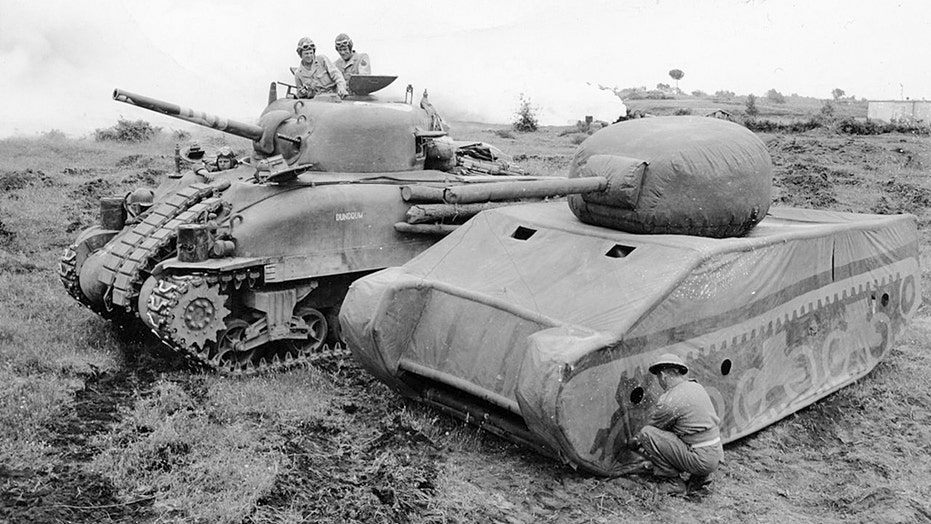 It was 75 years ago that the Allied forces undertook Operation Overlord, the codename for the invasion for the Battle of Normandy, which involved the D-Day landings that were actually codenamed Operation Neptune.

However, less known – but perhaps equally important – was Operation Bodyguard, the codename for the World War II deception plan that was intended to mislead the German high command as to when and where the invasion would take place.

As the overall strategic deception plan, Operation Bodyguard began in earnest in 1943 under the auspices of the London Controlling Section (LCS), a secret department that had been established in September 1941 to coordinate all Allied military deception efforts. The department had numerous sub-operations – each with its own specific roles and objectives.

However, the key objective of Operation Bodyguard was to convince the Germans that the invasion of northwest Europe would come later than planned but also convince the German high command to expect attacks in Norway, the Balkans, the Mediterranean coast off France or, most notably, the Pas de Calais region.

"The deception operation had been developed over a period of time, and it was a major undertaking," Dr. Gerhard L. Weinberg, professor of military history at the University of North Carolina at Chapel Hill and author of  “A World at Arms : A Global History of World War II,” told Fox News.

One of the major elements of the Allies’ deception plans was Operation Fortitude, which had the goal of ensuring the German forces would remain spread thin. The Allies used a number of deceptive tactics to convince the Germans that Allied forces would attack in those other locations – and even after the actual Normandy landings a goal of Fortitude was to delay the movement of German forces to Normandy.

To this end, Fortitude was to suggest that a larger invasion would occur in Norway or Calais and that Normandy was really a feint. The overall operation was broken down into two parts: Fortitude South and Fortitude North. South was intended to mislead the Germans that the Allies were building up for an invasion at Pas de Calais, the narrowest part of the English Channel; while North was designed to convince the Germans that the Allies would launch an invasion of Norway.

"Fortitude South was the larger and arguably the more important of the two," said Weinberg. "This one resulted in the creation of an entire fake army group, the 1st U.S. Army Group (FUSAG), with General Patton as its commander. The Germans had recognized his role in the success of the Allies' campaigns in North Africa and Sicily, so it was reasonable to think he'd be leading the invasion. The key point of Fortitude South was to make the Germans think the main thrust would be at Calais."

The FUSAG ruse was supported by Operation Quicksilver, which created the basic story of the Army Group; it included radio deception, including the movement of real units and to increase activity around Dover in southeast England to support the impression that Calais was the target. Another important facet of Quicksilver was the bombing effort around the Pas de Calais region immediately before D-Day.

"The whole idea was to isolate the battle," military historian John Coyne McManus, professor of military history at Missouri University of Science and Technology and author of  “The Dead and Those about to Die: D-Day: the Big Red One at Omaha Beach,” told Fox News.

"Because the Germans didn't know where the real invasion was coming there weren't a lot of soldiers actually at the beach, but they had a lot of troops inland," McManus said. "Fortitude and its smaller operations helped convince the Germans not to move to Normandy immediately."

While FUSAG was, in essence, fictional and hence a "phantom army" a number of clever deception tactics were used to further make it seem real, to varying degrees of success. This included the display of dummy landing craft, which were made of wood and canvas and nicknamed "Bigbobs" as well as inflatable tanks, a deception tactic that had been used in North Africa and prior to the landings in Italy in 1943.

One of the most basic tactics was to create unit insignia in the form of shoulder patches, which were provided to soldiers who would wear them in towns and cities where there were suspected German agents.

However, by 1944 nearly all of the German agents had been intercepted and many were recruited as double agents under the "Double Cross System." Three, in particular, helped spread misinformation to the Germans: Juan Pujol Garcia, a Spanish citizen recruited by German intelligence and later employed by the British, Roman Czerniawski, a Polish officer who had been captured by the Germans and offered the chance to spy, only to turn on the Germans and work for the British; and Dusan Popov, a Serbian lawyer turned double agent.

Paradummies, known as "Rupert," were used as part of the Allies' D-Day deception strategy. (IMA-USA.com)

Known as "Garbo" Juan Pujol Garcia took matters further and created a network of imaginary agents, whom he told the Germans were supplying him information on the German preparations. He misled the Germans about the time and location of the invasion and helped convince his German handlers that Pas de Calais was the target of the main attack.

"This was hugely important," Dr. Vince Houghton, historian and curator at the International Spy Museum in Washington, D.C., told Fox News. "Hitler really trusted the information that was coming from these spies. He believed it because it had been verified in the past."

Similar efforts, including fake units and bogus radio traffic, were used as part of Fortitude North under Operation Cockade, which created a fictional British Fourth Army that was headquartered at Edinburgh Castle. Along with reports from two Norwegian double agents – dubbed "Mutt and Jeff" – and British commando raids in Norway, the Germans were on guard in Norway, and even by the spring of 1944, there were still 13 army divisions stationed there.

However, the overall importance of Operation Bodyguard remains one of debate, and some of the efforts may not have been necessary – notably the decoy landing craft and tanks.

Shoulder patch of the 135th Airborne Division, a non-existent "ghost" unit that was part of the First United States Army Group. (Collection of Peter Suciu)

"By March to May of 1944 there were very few reconnaissance flights over even southern England," explained Dr. Mary Kathryn Barbier, professor of military history at Mississippi State University and author of “D-Day Deception: Operation Fortitude and the Normandy Invasion.”

"How much did the Germans see and photograph? It was minimal," she told Fox News. "The radio communication was a mix of transmissions in code and some in the clear and it bombarded the radio so that the Germans couldn't capture a lot of it. Even with the double agents sending the reports back there was more than the Germans could go through"

But rather than being wasted it was an insurance policy, added Barbier. "The Allies didn't know what the Germans would intercept, so I wouldn't make the argument that it was over the top or too much."

The combined efforts did pay off in big ways. The Germans continued to believe for several weeks that Normandy was a feint.

FILE - In this June 8, 1944, file photo, under heavy German machine gun fire, American infantrymen wade ashore off the ramp of a Coast Guard landing craft during the invasion of the French coast of Normandy in World War II. June 6, 2019, marks the 75th anniversary of D-Day, the assault that began the liberation of France and Europe from German occupation, leading to the end World War II. (U.S. Coast Guard via AP, File)

"The German 15th Army was in the Calais region expecting the 'real invasion' and it remained there until the Allied breakout from Normandy in July," said Weinberg. "It waited there for an invasion that never came. Given that the Allies had a good deal of trouble on June 6 it is likely they would have been thrown back into the sea if the Germans had been able to concentrate their main forces at Normandy."

Operation Bodyguard and its components helped keep the Germans guessing.

"Deception was a contributing factor, but it wasn't the only factor," added Barbier. "The air campaign, the naval bombardment and the ferocity of the Allies’ troops on D-Day all came into play as well."