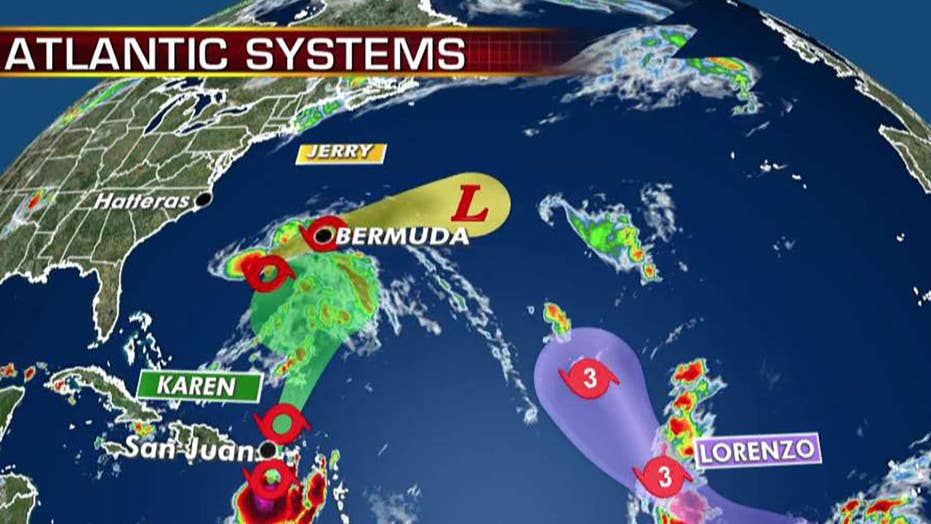 A trio of tropical systems is swirling in the Atlantic basin on Tuesday, with two of them forecast to impact land while a third is expected to become a major hurricane out in the open ocean.

The National Hurricane Center in Miami said Tuesday morning there are currently three named tropical storms -- Jerry, Karen, and Lorenzo -- with Karen forecast to have the immediate impacts to Puerto Rico and the Virgin Islands.

"Watching Karen very closely because Karen's going to bring the potential for very heavy rain and gusty winds over Puerto Rico over the next couple of days and then we're going to have to watch the track of this storm," Fox News Senior Meteorologist Janice Dean said Tuesday on "Fox & Friends." "It’s going to stall out in the Atlantic, and maybe, maybe we might be dealing with this across the East Coast."

Three tropical systems are currently churning out in the Atlantic basin. (Fox News)

As of 11 a.m. ET, Karen is located about 65 miles south of San Juan, Puerto Rico, moving north at 7 mph with maximum sustained winds of 40 mph.

Tropical storm warnings have been posted for the U.S. and the British Virgin Islands and Puerto Rico. The storm is forecast to pass over the islands by later Tuesday before moving over the western Atlantic by Wednesday.

Between two and four inches of rain is forecast to fall on Puerto Rico, with isolated eight-inch amounts in addition to tropical-storm-force winds.

"These rains may cause flash flooding and mudslides, especially in mountainous areas," the NHC said.

U.S. Virgin Islands Gov. Albert Bryan Jr. said the storm had already caused mudslides in the territory and major power outages were reported early Tuesday, though he said the cause was not yet clear.

Schools and government offices were already ordered closed in Puerto Rico as well as in the U.S. and British Virgin Islands, with officials warning people to stay indoors. Puerto Rico Gov. Wanda Vázquez activated the National Guard on Monday and urged people in flood-prone areas to seek shelter, with more than 30 people reported in shelters by Tuesday morning.

"It's a reality that we might have power outages," Vázquez said.

As the storm approached, Puerto Ricans were shaken from their beds late Monday by a magnitude 6.0 earthquake that hit in the Atlantic near the island at a shallow depth of six miles. Three aftershocks, of magnitude 4.7 and 4.6, followed within less than an hour.

In addition to Karen, Tropical Storm Jerry is currently forecast to pass near Bermuda on Wednesday, bringing heavy winds and several inches of rain to the island.

The storm is located about 275 miles west-southwest of Bermuda, moving north at 8 mph with maximum sustained winds of 60 mph.

Tropical-storm-force winds extend outward up to 185 miles from the center of the storm, which is forecast to bring between one and three inches of rain across Bermuda through Wednesday.

Farther out in the Atlantic, Tropical Storm Lorenzo formed over the far eastern Atlantic and was projected to become a major hurricane by the end of the week. The NHC said the storm has winds of 65 mph and was moving west-northwest at 16 mph, located about 370 miles west-southwest of the southernmost Cape Verde Islands.

"Strengthening is forecast during the next several days, and Lorenzo is expected to become a hurricane by Wednesday, and a major hurricane on Thursday," the NHC said.

The forecast track of Lorenzo appears to curve back out to sea, and not present any threats to land.

"We don't think Lorenzo is going to come close to the U.S., which is great news," Dean said Tuesday morning.