A senior Hamas militant and an Israeli soldier were among those killed Sunday evening as a new round of fighting broke out in the Gaza Strip.

The Israeli military initially reported an "exchange of fire" had taken place during operational activity in Gaza and said that "all IDF soldiers back in Israel." It later clarified that one soldier was killed in the exchange and a second was moderately injured.

Hamas' armed wing, the Qassam Brigades, claimed that Israeli undercover forces in a civilian vehicle infiltrated two miles into Gaza and fatally shot one of its commanders, identified as Nour el-Deen Baraka. It said militants discovered the car and chased it down, prompting Israeli airstrikes that killed "a number of people." The Palestinian Health Ministry said six people, including at least five militants, were killed and seven others wounded. In Israel, the military said it had intercepted two rockets fired from Gaza as air raid sirens continued to sound.

Israeli media reported that Baraka was closely involved in Hamas' tunnel program, which the group uses to smuggle arms and supplies out of the Gaza Strip as well as conduct attacks inside the Jewish state.

"Activities that most civilians aren’t aware of happen all the time, every night and in every region," Russo said, according to the Times of Israel. "This action ... wasn’t an assassination attempt. We have other ways of assassinating people and we know how to do it much more elegantly."

Sunday’s exchange of fire came as Israel and Gaza’s Hamas rulers appeared to be making progress toward an unofficial cease-fire. 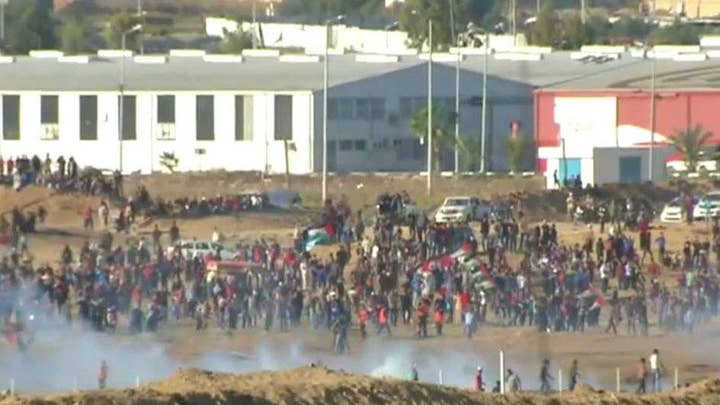 Israel last week allowed Qatar to deliver $15 million to Hamas, while Hamas scaled back its weekly demonstration along the Israeli border.

The payment is part of what is expected to be a set of informal understandings between Israel and Hamas reached through Egyptian and U.N. mediation.

Hamas is demanding an expansion of the permissible fishing zone off the Israeli-controlled Gaza coast, uninterrupted flow of fuel to mitigate chronic power shortages and the lifting of Israeli restrictions on exports and imports. In return, Israel wants quiet and an end to the border protests.

Israeli Prime Minister Benjamin Netanyahu told reporters Sunday that the money was “the right step” at the moment, and that he was committed to restoring quiet along the Israel-Gaza frontier and preventing a humanitarian crisis in the coastal Palestinian territory.

Later, at a press conference in Paris, when asked about his longer-term vision for Gaza, Netanyahu said there could be no political resolution as long as Hamas is in power.

“You can’t have a political resolution with those who are committed to your dissolution, to your destruction. That’s absurd,” he said. The alternative is to “do the minimal things necessary to maintain our security and to prevent the collapse of the humanitarian situation,” he added.

Israeli media reported through Twitter that Netyanhu would cut short his trip to Paris and return to Israeli Sunday evening. Netanyahu was in Paris along with dozens of world leaders to commemorate the centenary of the end of World War I.

Sunday’s development shattered what appeared to be a turning point after months of bloodshed along the Israel-Gaza border, with weekly Hamas-led protests drawing thousands to the perimeter fence with Israel. More than 160 Palestinians have been killed by Israeli fire in the border protests, in which Palestinians throw rocks, burning tires and grenades toward Israeli troops.

Hamas has been leading the protests since March 30 in a bid to ease a crippling Israeli-Egyptian blockade that was imposed in 2007 to weaken the militant group. The blockade has led to over 50 percent unemployment and chronic power outages and prevents most Gazans from being able to leave the tiny territory.