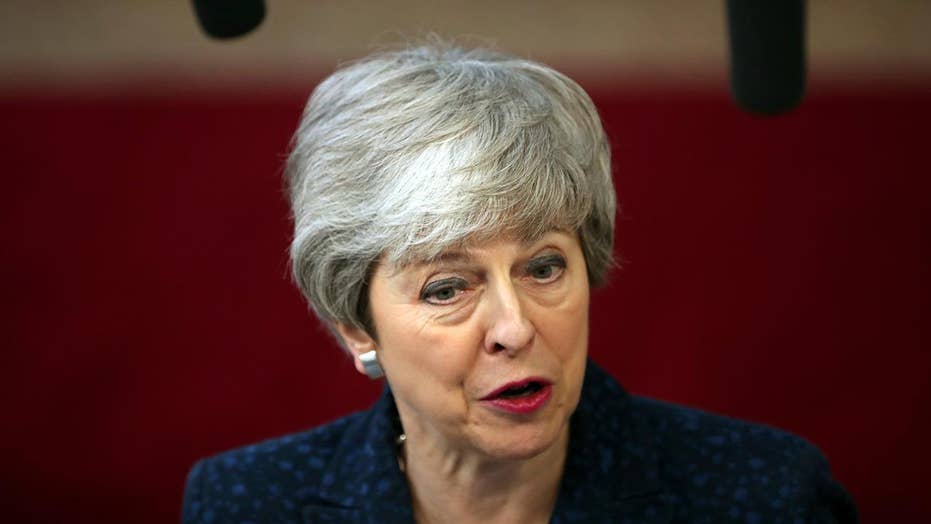 May says the current uncertainty is the result of Parliament failing to 'agree on a way to implement the U.K.'s withdrawal' from the European Union; reaction and analysis from Nile Gardiner, former adviser to Margaret Thatcher.

British Prime Minister Theresa May said Wednesday evening that it was "a matter of great personal regret" that the United Kingdom will not leave the European Union with a divorce agreement next week as previously scheduled.

Said May, it's time for members of Parliament to decide what will happen next.

"Do they want to leave the E.U. with a deal which delivers on the result of the [2016] referendum? Which takes back control of our money, borders and laws while protecting jobs and our national security?" May asked rhetorically during a brief address to the nation at 10 Downing Street. "Do they want to leave without a deal? Or do they not want to leave at all, causing potentially irreparable damage to public trust not just in this generation of politicians, but to our entire democratic process?"

May confirmed that she had asked European Council President Donald Tusk to postpone the scheduled date of Britain's departure from the E.U. to June 30 from March 29; she added that she isn't prepared "to delay Brexit any further."

E.U. leaders, who are exasperated by Britain's Brexit melodrama, will only grant the extension if May can win the U.K. Parliament's approval next week for her twice-rejected Brexit deal. In the letter to Tusk, May said she would set out her reasons to E.U. leaders at a summit in Brussels on Thursday.

Tusk has said he believes a short delay to Brexit "will be possible, but it would be conditional on a positive vote on the withdrawal agreement in the House of Commons."

"Even if the hope for a final success may seem frail, even illusory, and although Brexit fatigue is increasingly visible and justified, we cannot give up seeking until the very last moment a positive solution," Tusk said in Brussels.

May had planned to try again this week to get the agreement approved until the House of Commons Speaker John Bercow ruled that she can't ask Parliament to vote on the deal again unless it is substantially changed. The prime minister told Tusk that despite Bercow's ruling, "it remains my intention to bring the deal back to the House."

She's likely to do that next week -- within days or hours of Britain's scheduled departure -- by arguing that circumstances have changed, and that the speaker's bar on a third vote no longer applied.

In her address Wednesday night, the prime minister ruled out the possibility of a second referendum on leaving the E.U., which is supported by the opposition Labour Party.

"I don’t believe that’s what you want and it is not what I want," May told viewers. "We asked you the question already and you gave us your answer. Now, you want us to get on with it."

An added wrinkle to May's request is the scheduled May 23-26 election for the European Parliament. Britain's seats in that body have been allocated to other countries to fill.

Britain believes it won't have to participate if its scheduled exit date is pushed to June 30, because the newly elected European Parliament is not due to convene until July.

Some E.U. officials take a different view and want any extension to end by the first day of the European elections.

May poured cold water Wednesday night on asking Britons to vote in E.U. elections "nearly three years after our country decided to leave."

"What kind of message would that send?" she asked. "And just how bitter and divisive would that election campaign be at a time when the country desperately needs bringing back together?"