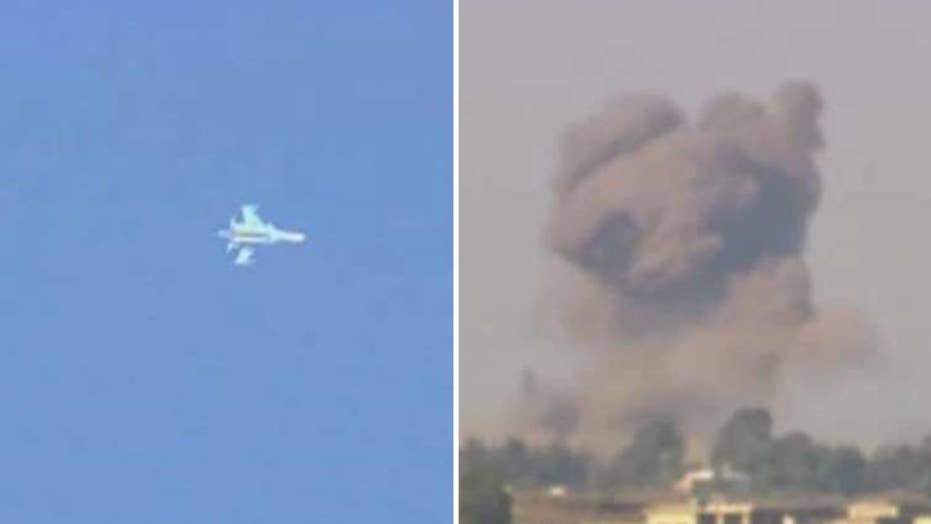 Israel shot down a Syrian Sukhoi fighter jet Tuesday after the aircraft infiltrated Israeli airspace while flying over the Golan Heights, the country's military announced.

The jet flew about 1.2 miles into Israeli airspace before it was hit by a pair of Patriot missiles, according to the Israel Defense Forces.

Lt. Col. Jonathan Conricus said in a news conference the jet crashed in the Southern Golan Heights on the Syrian side. He added the Israeli military has sent numerous warnings to prevent anyone from violating its airspace.

Conricus said the jet that took off from T4 air base was traveling toward Israel in "relatively high speed." He added tht it's unclear if the jet deliberately crossed into Israel.

Conricus did not provide an update on the pilots. The Syrian Observatory for Human Rights monitoring group said one pilot was killed and that the condition of the other was unknown.

Israeli Prime Minister Benjamin Netanyahu said the jet flying into the country's airspace was a "gross violation" of the 1974 Separation of Forces Agreement with Syria.

"Our forces acted appropriately. We insist that the Syrians strictly abide by the Separation of Forces Agreement between us and them," his statement added.

Tuesday’s incident is the first downing of a Syrian jet since a U.S. Navy F-18 Super Hornet shot one down over Syria in June 2017 after the Syrian plane fired on U.S.-backed Syrian forces.

This is the second time the Israel Air Force has brought down a Russian-made Syrian jet since 1985. The other time was on Sept. 23, 2014, when Israel also shot down a Sukhoi jet that entered over the Golan Heights.

On Feb. 10, 2018, an Israeli F-16 was downed by Syrian anti-aircraft missiles after Israel fired on an Iranian drone that entered Israeli airspace.

"Since this morning, there has been an increase in the internal fighting in Syria and the Syrian Air Force's activity. The IDF is on high alert and will continue to operate against the violation of the 1974 Separation of Forces Agreement," the military said in a tweet.

Minutes before the reported shootdown, Syria's state-run Al-Ikhbariya TV was broadcasting footage from the fence demarcating the U.N. buffer zone between Syrian and Israeli forces inside the Golan Heights. A U.N. observer post could be seen just on the other side of the fence.

Fox News' Lucas Tomlinson and Yonat Friling in Jerusalem and The Associated Press contributed to this report.