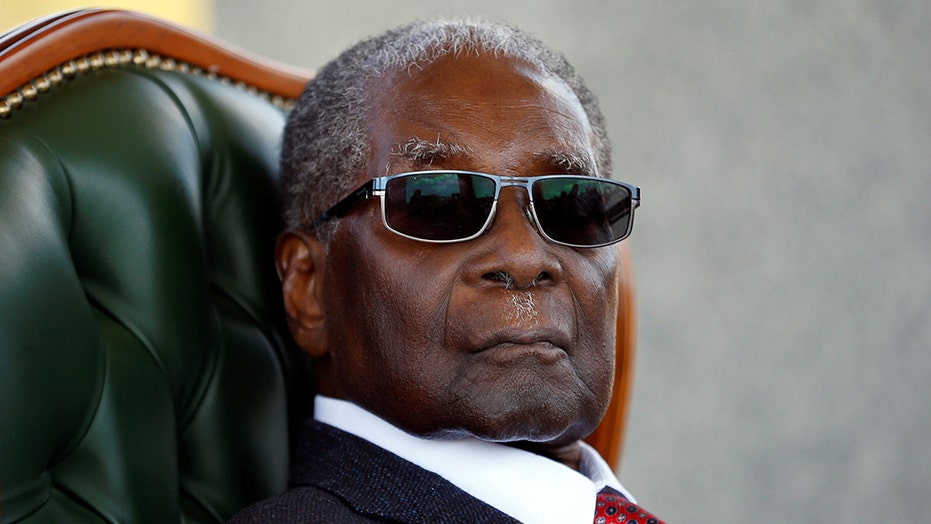 Concerns over the health of former Zimbabwean President Robert Mugabe are growing, despite assurances by the president who ousted him that the 95-year old is making progress.

Mugabe went for an annual check-up at a hospital in Singapore in April. But doctors, while not saying what specifically is ailing Mugabe, made him stay as an in-patient for the past four months.

Now his son, Robert Mugabe Jr., has released photos of himself with his father. Famed for a smartly jet-black hairstyle and sharp suits, Mugabe instead can be seen in a tracksuit, with an unruly mop of white hair.

Clearly concerned about his health, Emmerson Mnangagwa, the current Zimbawean president, this past week sent a delegation to Singapore to check on his condition.

In a statement, Monday, the president said that Mugabe “continues to make steady progress towards eventual recovery” and that “he is responding well to treatment.”

Mnangagwa claimed Mugabe “could be released soon.” But he concluded: “I urge all our Church leaders to continue to lead our Nation in praying for his full recovery”.

Critics have lambasted Mugabe for spending months in a private hospital in Singapore, while back home in Zimbabwe (formerly known as Rhodesia),  the ex-president’s legacy has led to the public health system falling apart. There is no money for many of the drugs needed, and doctors and nurses can go months without receiving salaries.

In 1980, when Mugabe became prime minister, Zimbabwe’s economy was reportedly stronger than that of the U.S. So much farm produce and tobacco was exported that the country was referred to as Africa’s breadbasket.

US PAYING $475G TOWARD BORDER WALL - IN ZIMBABWE: REPORT

But, as he went on to become president in 1987, Mugabe oversaw the collapse of the economy. Corruption became widespread, and nepotism saw the president giving farms, built up over generations by mostly white farmers, to supporters of Mugabe’s party, ZANU-PF. Farm equipment was looted, and crops failed. It was not uncommon for inflation to run into four digits.

In 2017, the Zimbabwean army staged a soft coup, removing Mugabe and installing Mnangagwa first as caretaker ruler. The former right-hand man of Mugabe went on to win a presidential election in 2018.

But now the new hope under Mnangagwa has all but gone. The economic miracle promised has not been delivered. The country is suffering from soaring inflation, as well as a new enemy - drought. The government is struggling to find foreign currency so it can buy and import power after frequent power blackouts lasting up to 18 hours.

Zimbabwe also doesn’t have funds to buy sufficient water purification chemicals, which has led to widespread rationing of drinking water. Many grocery stores have empty shelves, and long lines can be spotted outside gas stations as fuel supplies run critically short.

With some Zimbabweans openly claim things were better under Mugabe, reports indicated that in President Mnangagwa’s own ZANU-PF party there are rumblings of major discontent, and that some party officials are calling for his head.